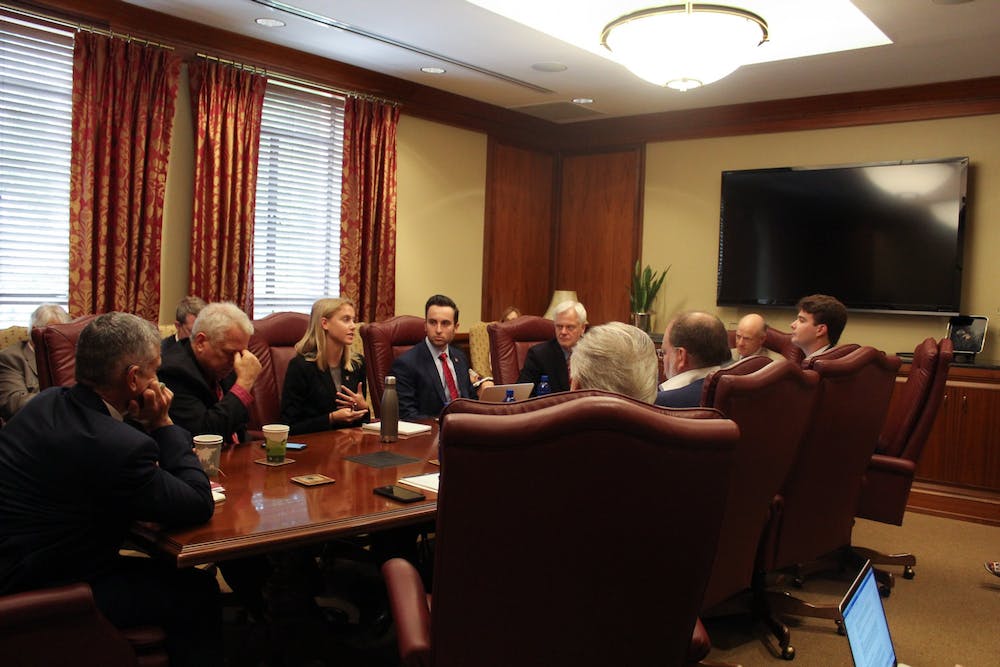 In the wake of accusations of undue political interference in the election of President Bob Caslen, the university’s board of trustees convened on Friday to discuss and pass measures against external interference.

The majority of the board’s members, including Student Body President Luke Rankin, were not physically present at the meeting. Instead, a conference call with all members of the board and Rankin was initiated while university officials gathered in the board’s meeting room.

The meeting commenced with a discussion, led by general counsel Terry Parham, regarding the adoption of four policies that would protect the university from external influences: governing in accordance with state law, governing free from external stakeholders’ influences, protecting the academic freedom of faculty, staff and students at the university and assuring accountability to the public interest.

"I congratulate Terry and chairman von Lehe for drafting a comprehensive policy about what the board should do. I'm wondering, it's largely silent on what happens if the board doesn't,” faculty representative Mark Cooper said.

Parham said the policies are "self-governing" — board members who have been "subjected to an attempt at undue influence" should report the attempt to the board of trustees' chairman, who will send it to the board’s governance committee for evaluation.

An additional point of contention emerged regarding who these rules would apply to.

The adoption of these policies by the board of trustees was unanimously approved.

Additionally, the hiring of assistant football coach Tracy Rocker was discussed. Rocker, who was hired as defensive line coach from Monday until the end of 2021, will be paid $525,000 annually, with additional bonuses in place for winning the SEC championship and postseason bowl or playoff games.

Before the hiring process concluded, board member Rose Newton voiced an objection to the contract’s terms.

“I really struggle with the language in the contract that, you know, we’re required to pay them their salary if they’re not performing,” Newton said.

Athletics director Ray Tanner provided some background to the issue.

“We have not had provisions in our contracts and, quite frankly, I’ve never really read one, where we have things such as, ‘You have to win a certain number of games,’ or have some standard about, for a defensive coach, you know, yards given up,” Tanner said.

The motion to hire Rocker carried, adjourning the meeting.

Correction Feb. 15 at 10:12 a.m. - A previous version of the article incorrectly stated that Rankin was not at the meeting.