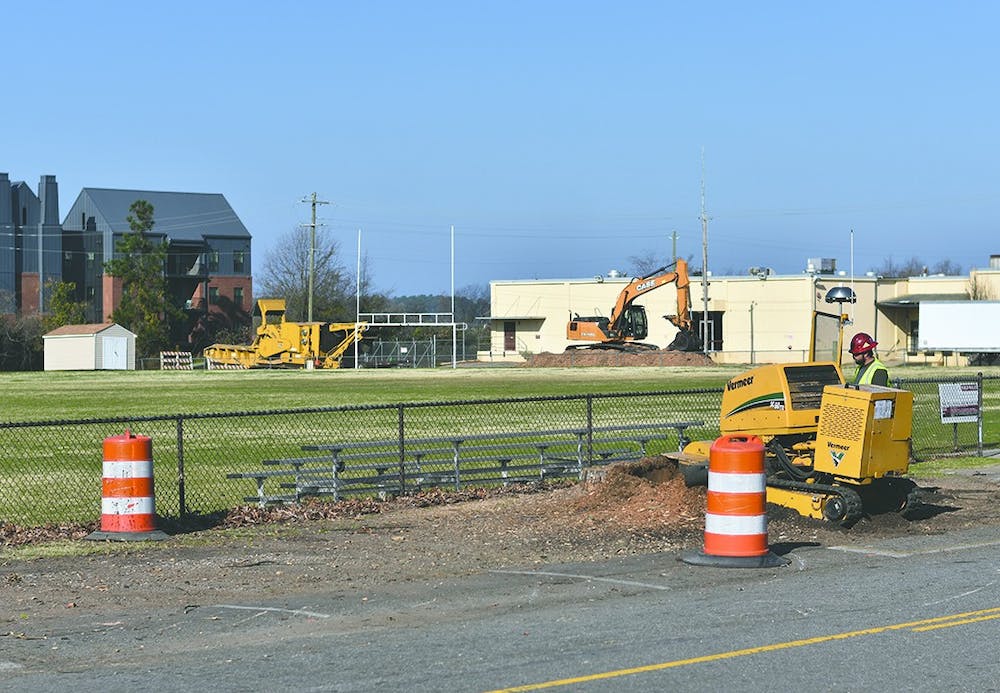 After plans to build a Greek parking garage were halted, the university now plans to switch up parking arrangements near the Colonial Life Arena.

Current plans to increase Greek parking include opening the AD3 commuter lot across from 650 Lincoln to Greek students while building a new commuter lot on Greene Street field near Colonial Life Arena.

While the parking garage would have added an additional 900 to 1,000 parking spots, the AD3 lot supports 500 parking spots. Jeff Stensland, the university's spokesman, outlined the reasoning behind this decision.

“A garage is exponentially more expensive and requires multiple state and local approvals. In contrast, a surface lot can be graded and surfaced fairly quickly and much more affordably,” Stensland said in an email interview.

Ariba Johar, a third-year psychology student who parks at the AD3 lot, said in an email interview that these plans would not help commuters.

“Unless the new commuter lot is bigger than the current lot, then no we are not solving the problem. The Greeks already have their own parking near the village and adding the new [lot] that is exclusively for the Greeks would not be conducive,” Johar said.

Johar said she would want these changes to reflect commuter students' needs, taking into consideration the scarce availability and reserved graduate parking spots.

“I would want to make the lot bigger and move the reserved graduate spots to another lot. Us undergrads already are fighting for spots, we do not need to throw in more people into the ring,” Johar said.

Greene Street field, where the new commuter lot is slated to be built, is a sports practice field where the university’s quidditch and intramural soccer teams practice.

Erin Smekrud, a fourth-year biology student and co-president of the Gamecock quidditch club, said in an email interview that the parking lot will affect the team.

“We host one tournament every semester and we always use Greene Street field because it is on campus so I do not have to arrange rides for my team to an off-campus location and the field is easy to reserve,” Smekrud said.

Smekrud said getting a field that is convenient for students is already difficult.

“I try to request Strom or Blatt fields since they are also on campus and have lights, but I am denied because intramurals has control over those fields,” Smekrud said.

The quidditch team normally practices on Bluff Field but also utilizes the Greene Street field, according to Smekrud.

Smekrud said while this parking expansion will solve one problem, it creates another.

Stensland said the board of trustees plans to discuss alternate field sites at its Feb. 21 meeting.

“In terms of the recreation fields, we believe existing fields can be utilized more while we work [to] acquire additional recreation fields near the Williams Brice Stadium,” Stensland said.

Johar said this plan ultimately does not provide a long-term solution for the parking problems commuters currently face.

“The new lot would be farther away so we would have to recalculate our walking commute and then the same situation would play over again as we have in the current lot of fighting and searching for a spot,” Johar said.

Stensland said the new lot is a single piece of a bigger plan to bring additional parking to USC.

“The new surface lot was a way to support commuter parking as we make room for the Greek Village parking nearby,” Stensland said. “It is one piece of a larger strategic plan to address both long term parking and public transportation needs.”

As advertised by bright yellow signs surrounding Greene Street field, the next step in the university’s plans includes getting approval from the City of Columbia Board of Zoning Appeals during a public hearing on Feb. 11 on the third floor of city hall at 10 a.m.