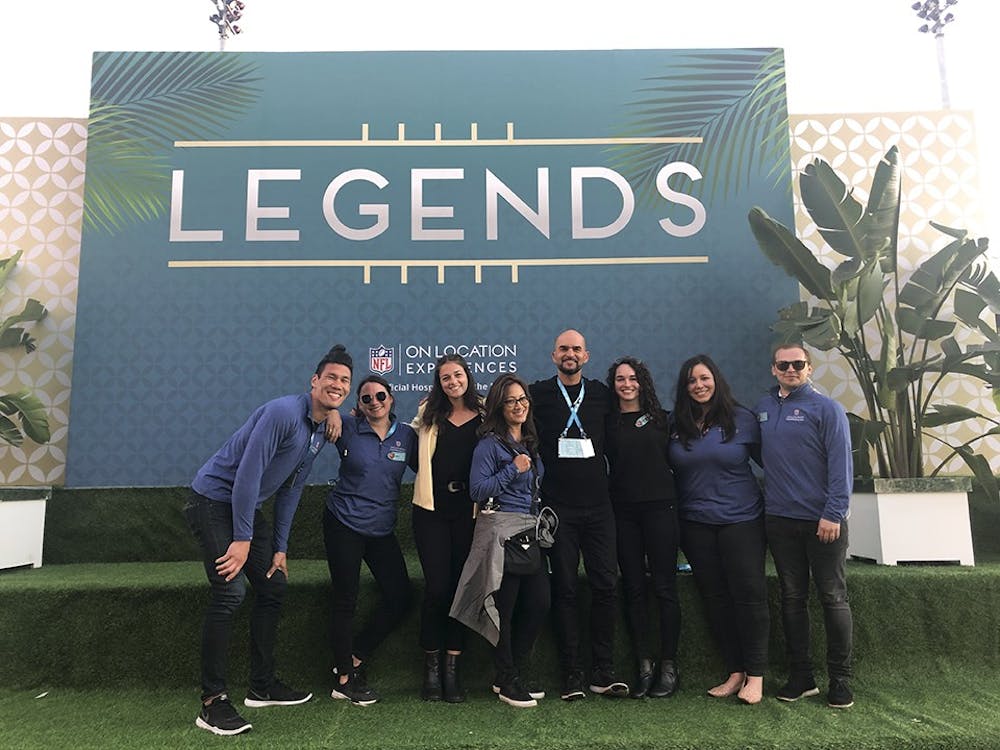 What 20-year-old Sam Silber thought was a job shadowing opportunity turned into a big-time job offer on one of sports' biggest stages: the Super Bowl.

After receiving an opportunity to shadow professionals in the operations department for the Carolina Panthers at the Bank of America Stadium in Charlotte, the third-year sports and entertainment management student worked her way into a production assistant position for Kreate Events, an event management and hospitality company that works with the NFL.

In order to get the initial shadowing position, Silber interviewed with Scott Paul, vice president and executive director of stadium operations for the Carolina Panthers.

“I suggested a non-game day, 'cause I wanted to get the work experience and didn't want to come off like I was trying to get tickets to a game, 'cause that's not, that doesn't look good. And he was like, ‘No, you're going to come shadow at the Buccaneers game," Silber said.

Silber said Paul put her in contact with the director of stadium operations. From there, she shadowed the head of every department in stadium operations, including sponsorship, guest relations, security and the control room. She was invited back to a second game, when a situation arose in which certain VIPs couldn’t get their tickets, so Silber delivered the tickets to the VIPs outside the stadium.

Silber’s supervisors were surprised by this, she said.

“They're like, 'Why are you working? Like, you don't work here. That's way too much. You don't have to do that.' I was like, 'Oh, well, who's going to do it?' and then they start freaking out. They're like, 'We should hire you,' going off, like, freaking out that the 'shadow' is helping,” Silber said.

Silber kept in touch after shadowing the game and continued to foster the relationships she had built, and eventually was invited to work guest relations game days for the season. However, when Silber arrived for training, she learned she had been named to a managerial position on the Panthers guest relations staff.

While working for the Panthers, she put on an event with Leah Linke, senior vice president of Kreate Events. Linke reached out to Silber to set up a phone call, Silber said.

“I had talked to her about USC. I thought that she wanted her son to transfer into sport management, and I'm a student mentor, so I was all on board for that phone call. That's what I totally thought it was," Silber said. "I get on the phone with her, and she invites me out to be her production assistant for the Super Bowl.”

Linke invited Silber to Miami and told her to create her own team of three productions assistants and 10 volunteer students.

Of the “four major hospitality parties” during the Super Bowl, Silber and her team were placed in charge of the Legends Pregame Party.

“We built an entire venue out of this parking lot … I got there, and it was bones, and by the time it was done, it was gorgeous, the most beautiful thing I've ever seen, and it was insane, and it was awesome,” Silber said.“We had people like Dan Marino walking around. Marcus Allen was our host. We had 13 total, but those were just two off the top of my head, walking around, hanging out with fans and making sure everyone is having a good time.”

Silber will be graduating in December, and she said she hopes to find a full-time job in management for the sports industry. She’ll be back working with the Panthers again this summer and fall.

“Do not be afraid to ask questions. Keep your eyes open and really, really, really pay attention to what's in front of you because an opportunity might present itself and not look like an opportunity," Silber said. "If you can just get one foot in that door, you can wedge it all the way open.”