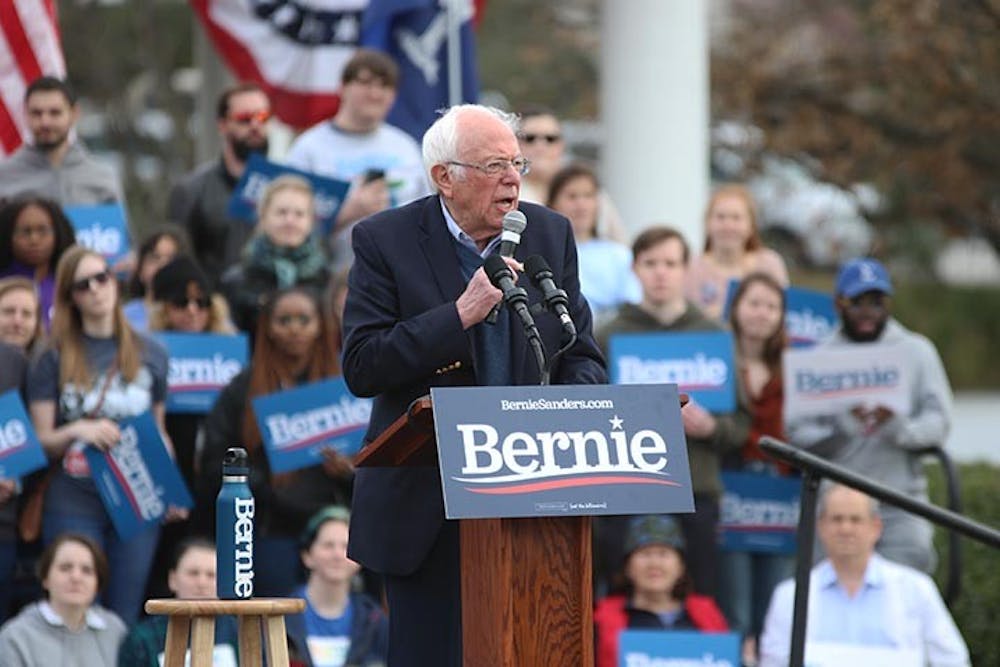 Bernie Sanders held a rally at Finlay Park in Columbia in a last effort to gain support in South Carolina before the 2020 South Carolina Democratic primary on Feb. 29.

Alyssa Williamson said she came to the rally because she wanted to become more politically involved.

"I just want to be more involved in politics and everything, and not just with my vote but, you know, actually being there," Williamson said.

Jennifer Lucas O'Briant and her children saw all of the other Democratic candidates that came to South Carolina, and she said she was interested in seeing Sanders as well.

"We've been doing a tour of the candidates that we could see this week," O'Briant said. "We saw Elizabeth Warren and John Legend earlier in the week in Orangeburg, and we wanted to come out and hear Bernie."

The rally began with a performance from the rap duo Blackillac, who were followed by several guest speakers.

Sanders began his speech by talking about why it was imperative that Donald Trump is defeated in the 2020 election.

"We are united in understanding that we have got to defeat the most dangerous president in the modern history of America," Sanders said. "We have to defeat him, and we will defeat him."

Sanders then spoke about what his administration would do if elected. One issue he discussed was raising the minimum wage.

"I've talked to workers in South Carolina, and they're telling me they can't make it on eight, nine, 10 bucks an hour," Sanders said. "That's why we're going to raise the federal minimum wage to 15 bucks an hour."

A key point of Sanders' speech was the promise to make higher education and colleges tuition-free while forgiving student debt.

"We believe that all of our kids, regardless of their income, have the right to a higher education college or trade school, which is why we're going to make public colleges and universities tuition-free," Sanders said.

Another point of Sanders' speech was universal healthcare for all.

"Whether the healthcare industry likes it or not, we are going to pass a Medicare for All single-payer program," Sanders said. "No premiums, no deductibles, no co-payments, no out of pocket expenses."

"About 10 years ago, my father was unemployed for like, a one year period, and during that period did not have healthcare; very scary paying for everything out of pocket," Plante said. "I know one of my friends with diabetes is spending roughly 300 bucks a month out of pocket on insulin, when people in Canada are spending 30."

Other key points of Sanders' speech were his proposal of the New Green Deal, which is a plan to combat climate change, criminal justice reform and the legalization of marijuana.

Sanders supporter Wade Penland said Sanders' consistency is what resonates with him.

"Bernie's not going to say anything up there that I haven't heard for the past 26 years of my life. Obviously the guy's been saying the same thing since I've been a thought in my parents' head," Penland said. "His message is the same as it's always been, and that's what resonates with me."