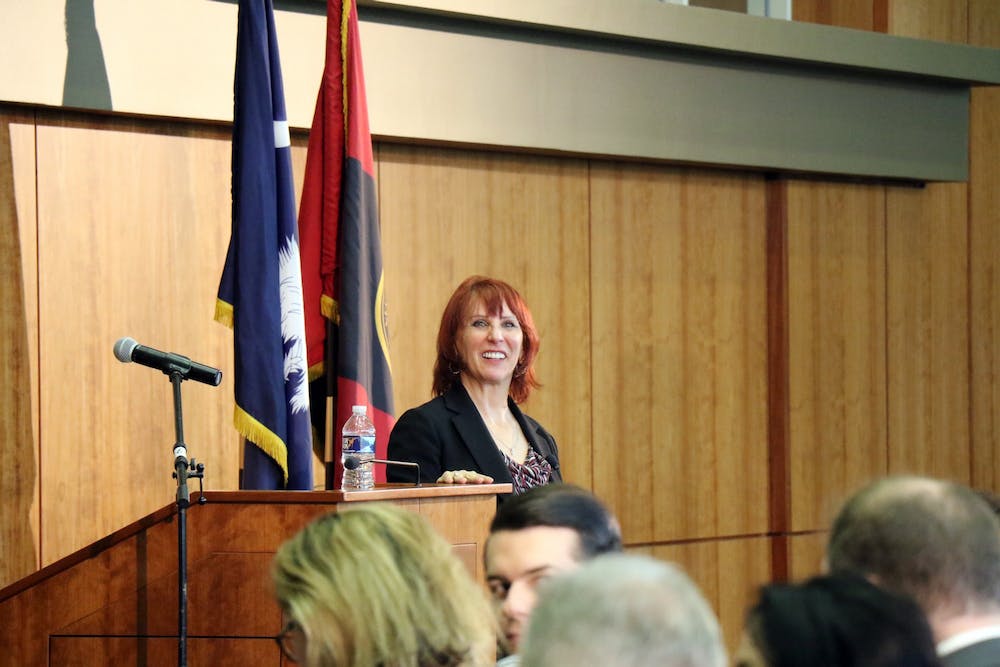 Q & A: Candidate for provost answers questions from student leaders

The search for a new provost continued today as provost candidate Nancy Rapoport answered the questions of student leaders during her campus visit.

According to the University of South Carolina website, the provost is “the chief academic officer of the university and second-ranking official, acting for President Caslen in his absence.”

Rapoport is a professor of law at the William S. Boyd School of Law and an affiliate professor of business law and ethics at the Lee School of Business at the University of Nevada, Las Vegas.

What do you think the number one issue is that students face?

“Well-being issues, generally speaking, it’s everything from physical safety to mental health, to issues of food insecurity, to the stresses of being a student either undergrad or grad or professional student. If I had to capture it in one word, I want to make sure that the campus is as healthy as it can be and as safe as it can be."

How do you think, as provost, you can affect a student's well-being here at the university?

"There's no substitute for going where the students are. I come from a tradition where people meet with students so that students can just drop by. I think that's really important. I like to be out at colleges and actually sit down with students.”

What are ways you think you can help as provost, help promote mental health and help increase our mental health system that we have around us currently as students?

“When I was in law school, I had my first big depression episode, so I felt health issues firsthand. And I, one of the things I've noticed is that it is very hard for students to get to counseling on time. And if you are in a crisis situation, you can't wait three weeks to be able to be heard – One of the things I do with my law students every single year when I'm teaching is I spend a little time talking about the signs of depression.”

What have you found that visibly missing in our student community or the university, and with your experience what can you contribute more?

“Okay, so it's a really great university. But nationally, it's not nearly as well known as it should be – I was telling yesterday, a group of really high powered researchers that I had the privilege of having lunch with, the Rapoport three for rule in terms of visibility, which is [for when] you do your research. You do your research first for your discipline because you want to make the discipline better. Then you do your research in part because you want your university colleagues to understand your research. But one of the things that y'all are missing considering how many good, interesting, unique things you have, is the third thing you do with that very same idea: Then, you have to let the general public know about the research, and you do that for two reasons.”

How from an academic standpoint, what's your push for more variety of LGBTQ+ studies?

“I was the Dean of the University of Houston Law Center at Enron filed the biggest bankruptcy in the country at that time. And I started looking around the board of directors, and the dean of Stanford's business school was on that board of directors. So it's not that they were absent smart people, but they did really stupid, bad things. And so I started studying incentives. And I started asking myself what makes smart people make bad choices, which is been my entire research career since then. Why do smart people make bad choices? And so if there's not a lot of LGBTQ courses, I want to know why. First, I want to know what are the roadblocks? Are there faculty members who want to offer it that they're too pressured by other things in terms of time and their other responsibilities to add a new course?”

The two other candidates for provost will visit campus later this month. William Tate, who was also a candidate in USC’s presidential search, will visit Feb. 18, and John Wiencek will visit Feb. 20. President Bob Caslen will make a final choice concerning the position in late March.

Editor’s Note: Erin Slowey, the editor-in-chief of The Daily Gamecock, attended the meeting in her official capacity as editor-in-chief. Slowey did not vote or express any opinions about the candidate.