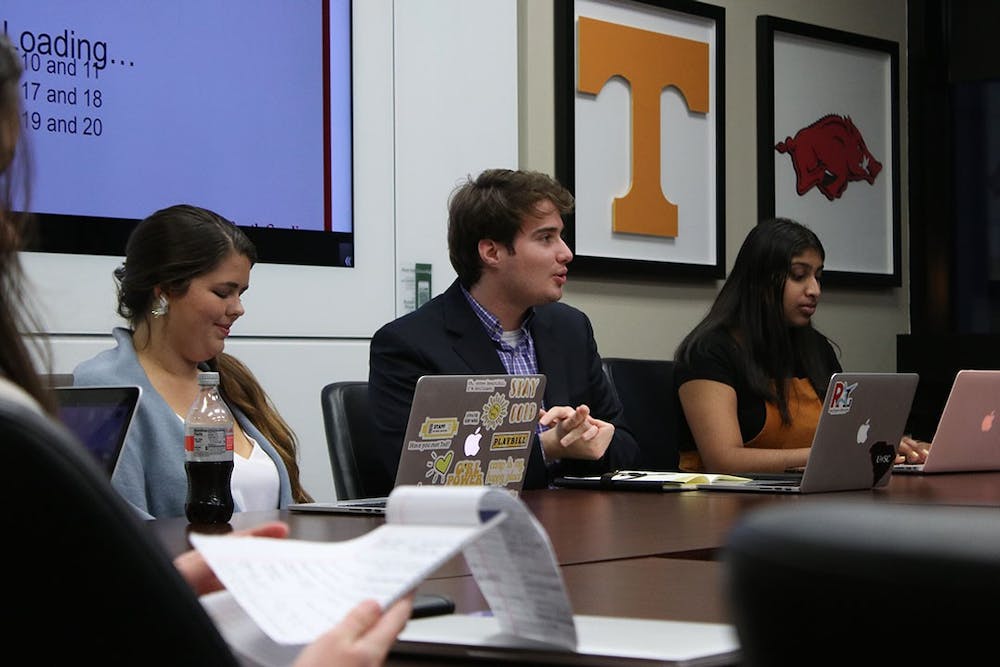 The meeting commenced with discussion of the university’s biyearly Campus Climate Survey. This voluntary survey is issued to all students, faculty and staff to allow the school’s Diversity and Inclusion Advisory Committee  to evaluate the ways in which the university may or may not be living up to the values of the Carolina Creed.

Student Body President Luke Rankin stressed that, although some changes were necessary, there were areas of the survey that were positive.

“We’re doing great things, and we’re doing a good job at a lot of different things, and so let’s keep and hold onto that, let’s have better communication – I think that we had some slip-ups on how the total structure was working on a very fluid shared governance system, but we’re seeing changes to that,” Rankin said.

Rankin said he was particularly pleased with how consistent student life has been in the midst of so many changes occurring on campus.

Treasurer Kate Lewis, who is not a member of Rankin’s cabinet, was present at the meeting to clarify confusion regarding Student Government’s Inter-Monetary Fund (IMF).

This fund, started last year by former treasurer Emerson Odagis,  provides a pool of money for Student Government members outside of the office of the vice president, who typically oversees program development, to create their own initiatives.

Lewis’ presence in the cabinet today owed itself to the fact that only $800 of the IMF’s $3,500 had been spent, with less than a month to the end of Student Government’s operational budget.

“If this fund isn’t utilized, it's not gonna be available next year, so instead of having a problem of using your creativity and saying, ‘What do we do?’ Student Government’s gonna have the problem of not having enough money to do what we want to do,” Lewis said.

The group plans to push the university to adopt policy stances regarding sustainability, especially those regarding university operations.

“There is no set stance on sustainability or commitment, and we also have, like, the new student union and all of these, like, Cliff and everything that’s being built, and so basically we’re saying, ‘Are you thinking about sustainability?'" Sylves-Berry said. "These are some of the issues that we’re already seeing, and what can you do about them?’”

This push, though, is not to make demands, Rankin said, but rather to begin a conversation surrounding sustainability on campus and to ensure that all student voices are heard.