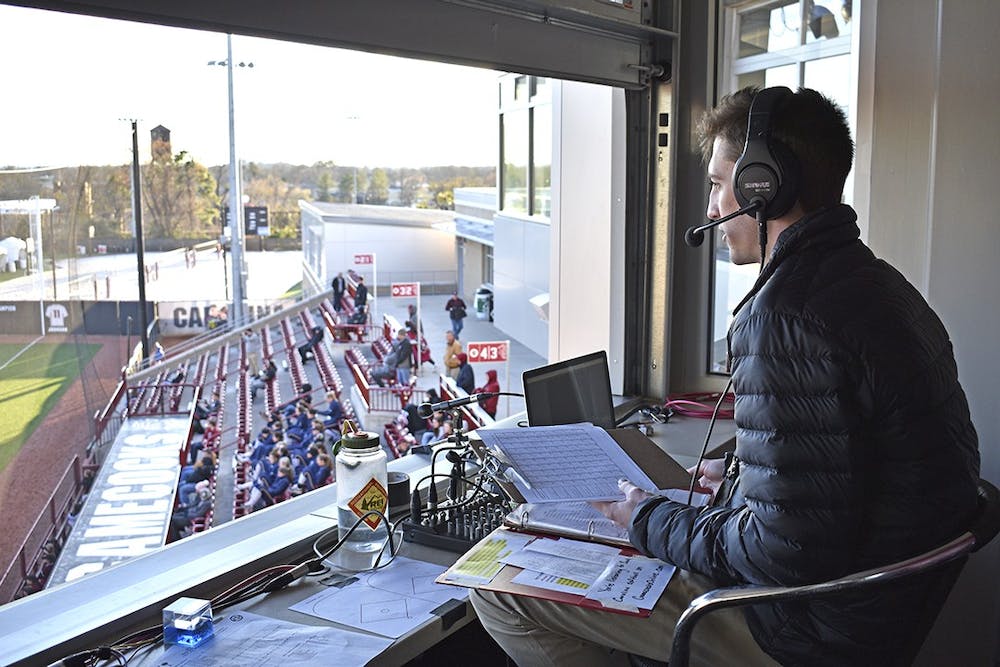 Gamecocks Online announced Jan. 27 that the Gamecock softball team would be partnering with the School of Journalism and Mass Communications to allow students to do play-by-play for up to 27 home games.

Martin said he is “very excited" and "very honored to have that opportunity to lead the way” with this program, and McKinstry said the news and "importance" of doing this "really hasn’t hit" him. Clark said the department talked for several semesters about building the relationship between the journalism school and athletic department, and he was excited to actually begin.

“In working with the sports announcing class during the fall, I was impressed with the talent, professionalism and work ethic I saw from the students who want to get into play-by-play as a career," Muller told Gamecocks Online. "These students have potential for a bright future in broadcasting, and I'm very excited that we've been able to create this partnership with South Carolina Athletics and the School of Journalism and Mass Communications."

Martin said the students learned the various parts of play-by-play announcing, such as the preparation of it and how to act on the air, and McKinstry said the class worked with different high school sports outside the classroom.

"It was more of an internship than a class," McKinstry said. "It was such a great opportunity to be able to be comfortable in your voice and learn the basics of sports announcing."

The partnership between the school and the team is another step toward helping students get real life experience in career fields they aspire to be a part of after their time as a student ends.

Kevin Hull, the sports media lead in the journalism school, told Gamecocks Online the partnership between the school and softball team is "just the next step" in sports media efforts at South Carolina. Starting next fall, there will be a sports media concentration in the School of Journalism and Mass Communications. Hull said he thought opportunities such as these would be "a big part of the draw."

"We are always talking about making sure our students are getting these real-world experiences and I can't think of anything better than having our sports media students broadcast softball games for the Gamecocks," Hull told Gamecocks Online.

Martin said he thought the partnership would be a "good recruiting tool" for those who grew up wanting to impact sports without playing in it.

In all, Clark, Martin and McKinstry acknowledged the importance of their roles as “trailblazers” of this new partnership for the future of the SJMC and the impact this new partnership can have on future students. Nonetheless, there is pressure on these three students, but they are ready to embrace it.

“I know there’s a lot riding on this, so a lot of pressure but it makes it even better," Clark said.