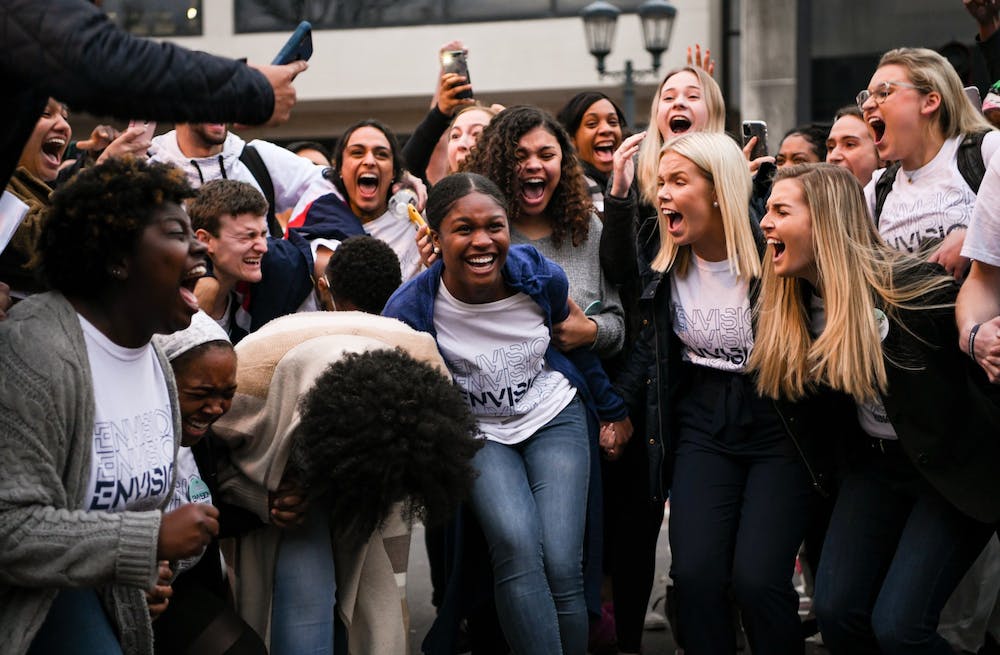 Rushton and White ran together on the Envision ticket, defeating Samantha Mayberry and Zach Crawford on the Mayberry-Crawford ticket.

"Hard work pays off, and it takes a village," White, a second-year finance and marketing student, said. "There is no way I could have done this without Issy, without this whole team. This really showed me how it takes everyone together, a movement — this is bigger than us."

"Essentially, the commission had to go through and tabulate the results as we got them ... making sure all of the write-ins had met the requirements to be write-in candidates and all that and going through vote counts on them," said Lunn. "We also had two violations decisions that we had to put out and decide just before that."

Rushton discussed some of the things she plans to accomplish in her term as president.

"Hannah and I have been working on, and this was on our platform, requiring a mental health section on all syllabi," Rushton, a third-year psychology and criminal justice student, said. "We truly believe that adding that section will, kind of, bridge the gap between a lack of awareness about resources."

Askew said he wants to increase transparency and outreach while in office.

"I plan to increase the outreach of the treasurer's office, create a live budget so that students know where their money is going and just overall create a more efficient office, internally, so that we can hammer stuff out," Askew said. "The post-election high is most definitely not gone, I'm still riding it, but, you know, it's time to get to work."

Jacobus said he wants to start preparing for the speaker of the student senate position immediately.

"Immediately, I want to get work getting to know my senators, making sure we're already started on senate outreach and making sure senate is running like a well-oiled machine like it already is," Jacobus said.

Fourth-year history and education student Reiquan Richard said he felt it was important to vote as an African American student.

"For me, being an African American student at USC, it feels like oftentimes, our voice is not heard," Richard said. "I think it's important for us to come out and show support for people that we know who do listen to us and do care about what we have to say."

First-year biology student Amanda Pometti said one thing she wanted the new president to address, regardless of who won, was the shuttle system and transportation.

"It would be nice to have them open for a longer amount of time. I know that, like, that's something that one of the candidates was saying," Pometti said.