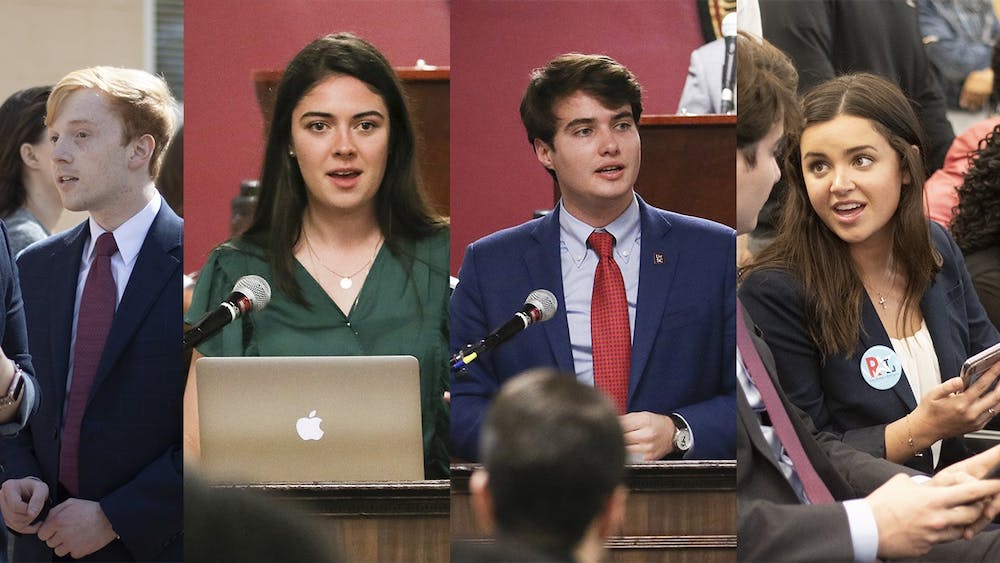 With Student Government elections right around the corner, students will soon be voting on several executive officer positions: student body president, vice president, speaker of the senate and treasurer. Each of these positions has specific responsibilities and roles which will affect the student body.

The student body president, a position held by fourth-year political science student Luke Rankin, serves primarily as the representative for the student body’s voice to the university, including at board of trustees meetings, where he sits in as non-voting member.

“Before each meeting, I spend an extensive amount of time going through and looking at, you know, the documents, reviewing the pictures, so I know what’s gonna be discussed,” Rankin said. “If any of those potential actions are going to affect students, that I know what these effects will be, and then I’m ready to speak on it.”

The president also appoints and leads an executive cabinet, which consists primarily of secretaries who develop programs in sustainability, Greek life, athletics and other areas of campus life.

The office of student body vice president, filled by fourth-year finance student Sophie Davish, was, until recently, tasked with overseeing student senate. Now, the vice president’s primary responsibility, per Student Government’s constitution, is to oversee the creation and implementation of programs by members of Student Government.

“The most important part of my position is making sure I am reaching as many students as possible,” Davish said in an email interview. “I try to do this by surrounding myself with a diverse group of staff members and student leaders as well as attending events and speaking to students that are not normally in my direct circle.”

Speaker of the student senate

The student senate contains dozens of members, each of whom can create and submit legislation for approval. The role of speaker can sometimes be a bit monotonous, according to Latham.

“I love the job, and I have fun doing all of it, but I would say the toughest thing is staying motivated to complete the mundane work,” Latham said in an email interview. “Every week I will have to read over tons of legislation and check for grammar and consistency.”

The position of student body treasurer is filled by fourth-year political science student Kate Lewis, who serves as the main point of connection between Student Government and student organizations. The treasurer, working with the senate finance committee, determines and allocates funding for the over 500 student organizations on USC’s campus.

Lewis said in an email interview this is not a competitive process and the treasurer’s goal is to ensure all students understand and take advantage of the funds the Student Government has available.

“Our goal is to always fund the organization as long as the request meets the Student Government Codes and Senate Finance Committee Guidelines,” Lewis said in an email interview.

The elections commission’s responsibilities primarily deal with the publication of Student Government elections, communication with candidates regarding election regulations and scheduling events for the elections. Such events include executive debates, the announcement of election results and inaugurations.