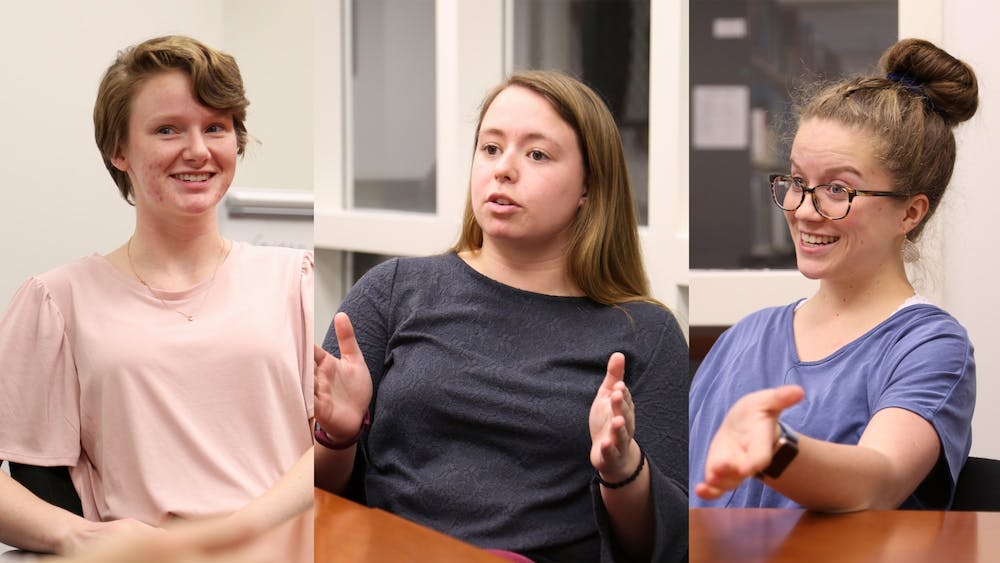 For the first time in almost 20 years, the Carolina Band will be led by all-female drum majors.

Sprung from military tradition, marching bands were once perceived as "a men’s game," according to Kirk. However, female drum major positions at the Carolina Band date back to the '70s.

“I think that’s amazing and a great testament to the culture of the university that we are that ahead," Dolbier said.

The role of the drum major is to conduct the band for pre-games, downs and half-times during a football game. Drum majors also lead rehearsals, band camps and help coordinate the 360-member band.

"The main thing that people think of when they think of a drum major is standing on a podium and conducting the band," Dolbier said. "We play a short cheer for pretty much every single down, and so we're having to watch the game really intently and stay really focused so that way we know exactly what’s going on and so we don’t do the wrong thing."

While conducting is a major role, their responsibility goes beyond standing on the podium.

"I think like our primary job as drum majors is just being the role model for the band in terms of preparation, attitude and spirit definitely. We kind of set the tone for how things are going," Powell said.

Both Kirk and Dolbier started off as business students, but their passion pushed them to pursue music full time.

“I got to a point where I realized, like, it wouldn’t be enough for music to be a hobby for me. It was something that I wanted to do every day, and I felt like ... I could better serve people and make a difference as a music educator instead of a business person," Dolbier said.

Powell's previous experience serving as a drum major in high school helped influence her decision to chose music education as her major at USC. When Powell came to USC, she knew she wanted to be a drum major for the Carolina Band.

When it comes to making mistakes, the drum majors are the ones at fault no matter who made the mistake.

“It doesn’t matter whose fault it is, it’s our fault, and that’s just the consequence of our position. We have to make sure we are doing our part as much as we can and help bring others up to their best as well,” Powell said.

Powell said one of the difficulties of being a drum major is making the right judgment call.

“So sometimes something happens at the field, and then in our ear we got like two different messages like someone said ‘it's first down!’ Some people say it's third down, some people are like, 'Oh, wait, no there’s a flag,'” she said. “It was hard for us to process what was going on 'cause it's really overwhelming and loud.”

Even amidst challenges, the three drum majors are able to support each other and bring the best out of each member.

"I feel like in front of [Doblier and Powell] I can be real Rachel and be vulnerable, and I should not do that in front of the whole group, but in front of them I definitely can, and I've always felt supported," Kirk said.

The trio attribute their strong bond to the similar values and goals they share. Studying music education has also helped with the consistency of their teaching and leadership.

“I feel like we're the same person but different sides of the same person," Kirk said. “I couldn’t pick two better people to be around this much all the time; it could not have worked out better.”

The three wish to encourage and scout more talented women in the days to come.

“Not because I think that someone because she’s a woman should be given something for the sake of diversity. I think women can work just as hard and have just as much merit, and that’s what I think is great is because we all got this position of our own accord,” Dolbier said.