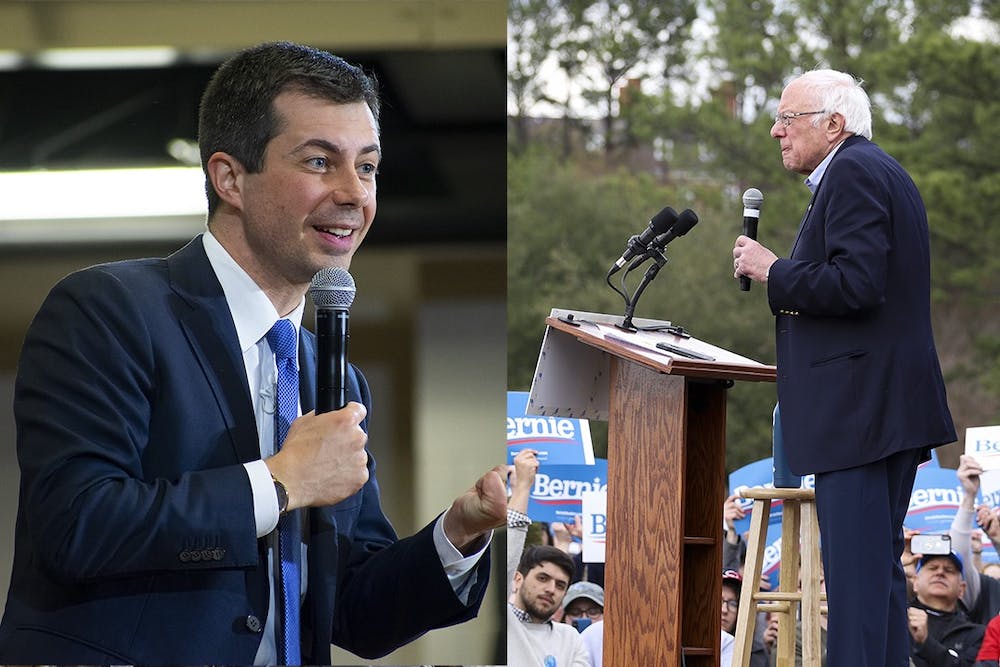 By Camdyn Bruce, and Holly Poag

Other candidates who came to the area included former Vice President Joe Biden, who won the primary on Saturday, and Tom Steyer, who has since dropped out of the 2020 presidential race.

In a rally in Finlay Park Feb. 28, Sanders talked about his plans for tuition and healthcare, among other platform points.

A key point of Sanders' speech was his promise to make higher education and colleges tuition-free while forgiving student debt.

"We believe that all of our kids, regardless of their income, have the right to a higher education college or trade school, which is why we're going to make public colleges and universities tuition-free," Sanders said.

Another point of Sanders' speech was universal healthcare.

"Whether the healthcare industry likes it or not, we are going to pass a Medicare for All single-payer program," Sanders said. "No premiums, no deductibles, no co-payments, no out-of-pocket expenses."

"About 10 years ago, my father was unemployed for, like, a one year period, and during that period did not have healthcare; very scary paying for everything out of pocket," Plante said. "I know one of my friends with diabetes is spending roughly 300 bucks a month out of pocket on insulin, when people in Canada are spending 30."

Other platform points in Sanders' speech included support of the New Green Deal, which is a plan to combat climate change, criminal justice reform and the legalization of marijuana.

Sanders supporter Wade Penland said Sanders' consistency is what resonates with him.

"Bernie's not going to say anything up there that I haven't heard for the past 26 years of my life. Obviously the guy's been saying the same thing since I've been a thought in my parents' head," Penland said. "His message is the same as it's always been, and that's what resonates with me."

Buttigieg held a rally in Columbia, South Carolina, on Feb. 28.

Buttigieg is from South Bend, Indiana, where he currently lives. In 2011, he was elected mayor of his hometown, where he worked to cut unemployment rates in half and raise household incomes by 31%.

“From a policy point of view, I really love the idea that he’s starting to talk about systemic racism and how it’s had an impact on where we are as a country and bringing the Douglass Plan to fruition to really elevate at the national level,” Love said.

Mia Riffle, a senior at a local high school, came to the rally to support Buttigieg. Though she is too young to vote currently, she will be old enough during the November elections.

Riffle said the more moderate side of Buttigieg caught her attention.

“I like his more moderate policies, and I just think that that has a better chance of his policies to be passed in the Senate and for change to actually be made,” Riffle said.

Buttigieg spoke on what he views as the purpose of the executive branch.

"I am ready to go toe-to-toe with this president and bring an end to the Trump administration," Buttigieg said.

Editor's note: Pete Buttigieg dropped out of the presidential race very shortly after this article was published.