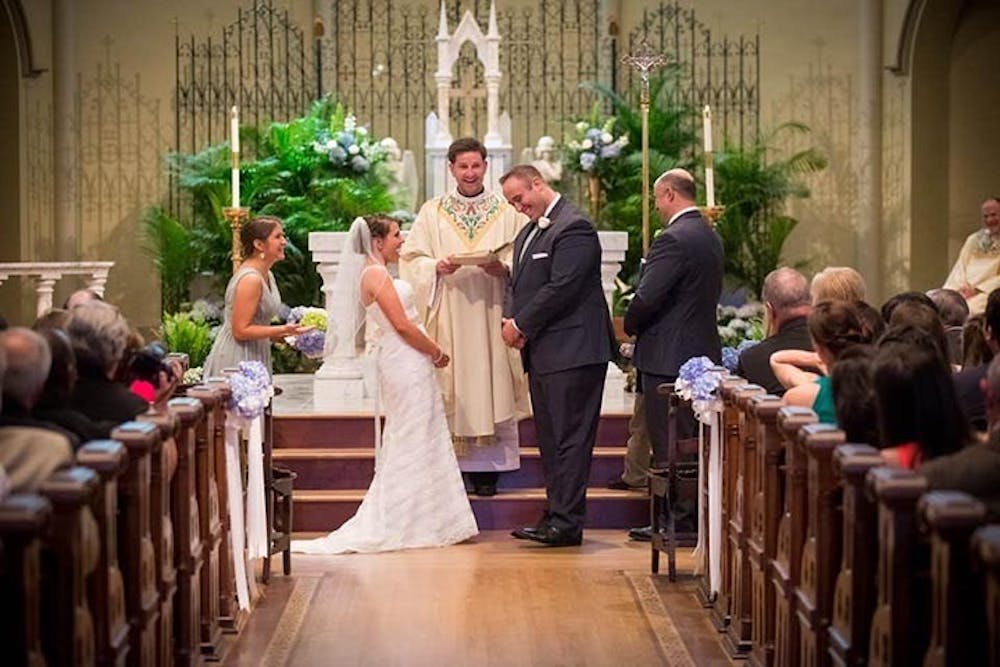 A jar of peanut M&M’s sits on the coffee table in St. Thomas More Catholic Student Center on Greene Street.

The M&M’s are a reminder of the Rev. Marcin Zahuta, the priest at the center, who passed away on March 1 at age 42. It was his favorite candy.

“Along the way, [he] mentored, guided, you know, taught many things about how to minister to people,” Brown said.

One of the things Brown remembers most about Zahuta is his laugh.

“Whether you're in the church meditating before mass, you're in the nursing school across the street, you could hear his laughter that just was booming laughter,” Brown said.

“We're gonna be able to find him in, like, all of the silly,” Tucker said. "He knew the power of a good laugh."

Zahuta could be found standing on the top of the hill beside St. Thomas More, talking to students and welcoming people into the center. That’s how he met C.J. Yarborough.

Yarborough, a second-year philosophy and religious studies student, said he had a bad day one Monday in 2019 and decided to go to mass, where he first met Zahuta.

“I pull my moped up to the chapel, and I'm sitting there, and the first words I hear in his crazy Polish voice is, ‘Oh, scooter boy! Is your scooter?’” Yarborough said.

Yarborough said Zahuta was one of the biggest influences in his coming back to church.

“Without him, I would be doing absolutely nothing I'm doing today. I wouldn't be a philosophy major. I wouldn't be as faithful as I am. I wouldn't have the community of people that I've met at St. Thomas More if it wasn't for Father Marcin,” Yarborough said.

In 2015, Zahuta was made the first priest at St. Thomas More after it officially became a standalone parish. He had worked with the organization as an administrator since 2008.

According to Brown, Zahuta had a “give and take with the students" he had not seen in others. Brown said Zahuta practiced a “ministry of presence” that involved being where the students were.

“There's never been a doubt in my mind that he wouldn't do anything for us, and not even just for us, but everybody here, any student,” Tucker said.

Yarborough credits Zahuta for the building of the St. Thomas More community.

“We're all from different backgrounds and everything, but I think he was really the cornerstone. And that's why this is so impactful is because he was the best priest that many people had ever met,” Yarborough said.

Tucker said Zahuta would not have wanted students to cry over his passing but would rather them be joyful.

“We're gonna do exactly what he wanted us to do. And whether that's chasing his dog around the house or screaming with Deacon Steve in the kitchen, we know that's exactly where he would want us to be,” Tucker said.