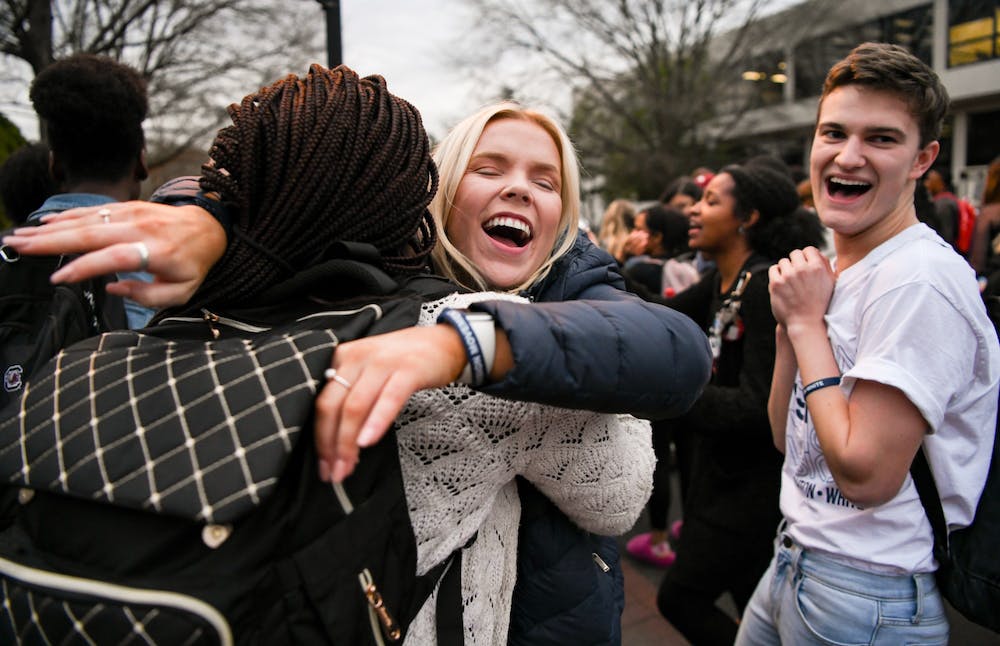 Born and raised on the Gold Coast of Australia, third-year psychology and criminal justice student Issy Rushton had only seen American life through TV until she was 15.

Now, she serves as USC's student body president— the first international student to do so.

With classes online for the remainder of the semester, the transition to online communication posed various challenges. For Rushton, it was adjusting to a 14-hour time zone difference.

“I will say that, while it took me a second to get settled back in Australia time ... we are still going ahead with planning,” Rushton said. “While it has been a little bit of a learning curve to get online and still be connecting, it hasn't stopped us thus far.”

Rushton said she tries to sleep during the same hours as USC staff members and students so she can communicate at convenient hours. That means she wakes up at 5 a.m. Australian Eastern Standard Time, sleeps for a few hours in the middle of the day and stays up in meetings until 1 or 2 a.m.

Before Rushton even knew USC existed, she pursued a six-month national student exchange.

“[Australian high schools] don’t have as much freedom,” Rushton said. “I thought that was pretty cool, that you could wear casual clothes and, you know, play high school sports and participate in those aspects.”

When she returned to Australia, she had made up her mind that she would go to college in the U.S. After “blindly" stumbling across USC, she said it had everything she was looking for — a big football stadium, many opportunities for growth and an incredible student experience.

“When I have a goal and something that I see in the future, I definitely chase it,” Rushton said. “I was chasing after [America] with everything I had.”

Though Rushton said she feels most at home at USC now, moving to America was still a challenge.

“I understand what it feels like to stand in a room and not quite feel like you belong there,” Rushton said. “I will use that knowledge to move forward and think of all students in the equation when making decisions."

Since Rushton's freshman year when she was on freshman council, Student Government was something she decided to dedicate time to.

“I felt that Student Government was that vessel to be able to make real change and leave the university better than when I first came in,” Rushton said.

To Rushton’s friends, it is clear she wants the best for USC.

“She really wants to get the best opportunities out of everything, and she just really wants to, kind of, establish a personal connection with everybody she comes into contact with,” Payton Ramsey, a third-year biology student and Rushton's roommate, said.

Ramsey said Rushton is "hard-working" and has valued every opportunity to grow and learn at USC.

“It’s really been great … seeing her grow as a person, but still see the person who I knew from freshman year,” O’Toole said. “She didn’t ever lose sight of who she was when she was getting involved on campus and has always stayed true to herself.”

Hannah White, the new student body vice president who ran with Rushton in this year's Student Government elections, said she has been able to see Rushton professionally develop since they first became friends.

“She has grown to have more of an assertiveness about her, and it’s not in a mean way whatsoever,” White, a second-year finance and marketing student, said. "It's more of, commanding the attention that she deserves and the confidence."

Rushton said she prides herself on wanting to hear everyone’s perspectives.

"Her leadership style is, like, a listen and then act," O'Toole said. "She really likes to get other people's opinions, and I think her ability to lead and also take criticism from others is what I would see as her biggest personality trait."

Along with her leadership ability, Rushton’s friends describe her as a "goofy" and fun-loving extrovert who loves Orangetheory Fitness, a gym chain with locations in Columbia.

“Something that I’ve always tried to do since coming onto campus is that, I try not to ever let my busyness interfere with my personal friendships,” Rushton said. “I’m never too busy to hang out with [my friends] or lend a helping hand.”