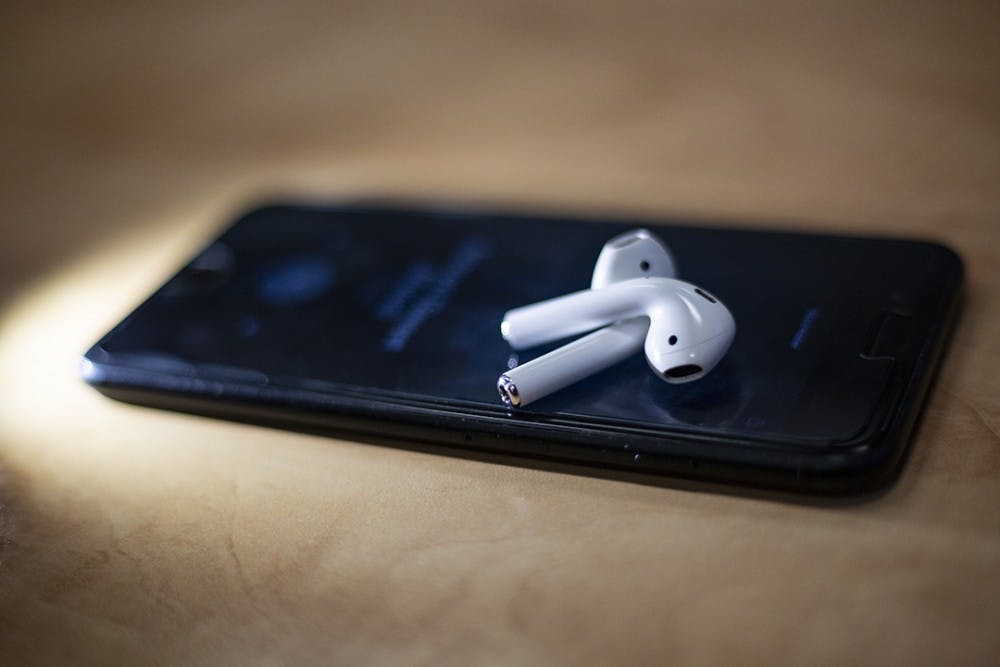 Between virtual classes, Netflix and checking phone notifications, it’s likely that screen time has reached an all-time high during quarantine. These podcasts could be the answer to finding the perfect balance between screen time and productivity. While listening to these podcasts, take a walk, do the dishes or even attempt a DIY craft you found on Pinterest.

For fans of "The Office," "Office Ladies" could be the next best binge-worthy podcast. Actresses Jenna Fischer and Angela Kinsey are real-life best friends who played the iconic characters of Pam and Angela, respectively, on "The Office." This duo re-watches and breaks down a different episode of "The Office" each week in an effort to share behind-the-scenes stories, answer fans' questions and give Fischer's “Fast Facts." Occasionally, the "Office Ladies" will even bring in special guests, such as Rainn Wilson, who played Dwight on the show. For both "The Office" experts and casual viewers, this podcast will give clarity on the thought process behind many characters and writers of the show.

College teaches many valuable lessons, but what it might not teach you is how artificial intelligence facial recognition works, where trick-or-treating came from or the history of soda. Luckily enough, Josh Clark and Chuck Bryant have all of these topics, and plenty more, covered. Although this humor-filled pair often touches on light subjects, such as why chopsticks are better than forks or why macadamia nuts are so expensive, serious topics are also discussed. For example, you can learn all about student loans or how government shutdowns work with the help of this podcast. Though most wouldn't consider this podcast as a news source, Clark and Bryant also touch on the subject of COVID-19 in one of their most recent podcasts in an attempt to inform the public more on what the virus really is. No matter the subject, there is probably already an episode about it on "Stuff You Should Know."

In season one of this investigative journalism podcast, Sarah Koenig takes a look into a 1999 Baltimore murder case of high school senior Hae Min Lee. Adnan Syed, Lee’s ex-boyfriend, has been in jail for over a decade as a result of this case, despite there being little to no physical evidence that he is guilty. With the help of Koenig’s narration, listeners can dive into this crime case by listening to trial cases, getting input from Lee’s close friends and hearing Syed’s side of the story. Tag along with Koenig as she regularly calls Syed to talk about the murder and to hear firsthand what happened when she questions a different suspect. Is Adnan Syed innocent? The answer might not be so black and white.

There are some movies out there that are so bad they become likable. "Jaws," "Scream" and "Santa and the Ice Cream Bunny" are just a few to be named. Paul Scheer, June Diane Raphael and Jayson Mantzoukas take a look into these terrible movies and talk about them in their comedic podcast “How Did This Get Made?” Each week, a new movie is discussed, sometimes in front of a live studio audience. This trio of movie critics has ridiculed everything from "The Adventures of Pinocchio" to "Friday the 13th" and makes their listeners laugh along the way. After listening to an episode of this podcast, rewatching the corresponding movie will be a completely new experience while keeping in mind the mockery and hilarious comments made by the podcast's hosts.

Shows such as "Prison Break" and "Orange is the New Black" have large followings, but is that what prison is actually like? According to Earlonne Woods, not at all. Woods is currently serving a 31-years-to-life sentence at San Quentin State Prison for attempted second-degree robbery, and he is a co-host and co-producer of the podcast “Ear Hustle.” Alongside him is Nigel Poor, the visual artist, co-producer and co-host, and Antwan Williams, who is also in jail for armed robbery and the sound designer for the podcast. The podcast is still partially created within San Quentin Prison and sheds light on what prison is really like. Everything from finding a cellmate to dealing with isolationism is talked about in this podcast, so for anyone curious about what really goes on behind bars, "Ear Hustle" can give insight.