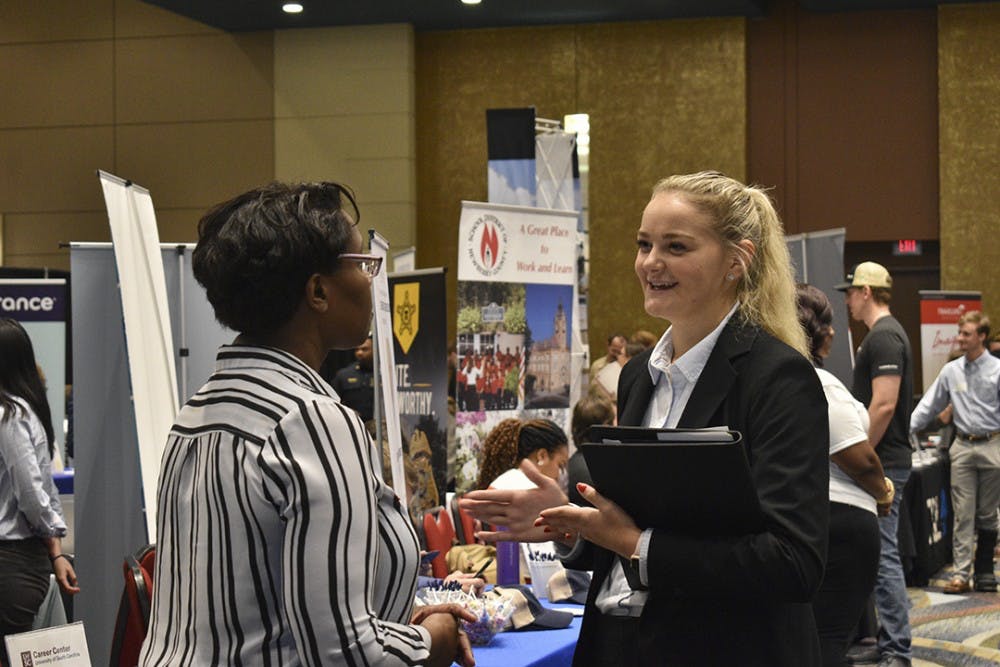 The COVID-19 pandemic has introduced a shaky economy, record-setting unemployment and a lot of worry. Despite it all, several economists and career experts say not all hope is lost.

For the 2019-2020 academic year, there will be a total of 3,898,000 college graduates in the United States. Many of these graduates, including those from USC, will enter the job market in hopes of starting their careers, a search that will be complicated by COVID-19.

“I'm hearing from our students, it is affecting internships. It's affecting summer jobs,” Orgul Ozturk, an associate professor of economics at the Darla Moore School of Business, said.

What’s going on with the economy?

Though official numbers won’t be confirmed until the summer, Joseph Von Nessen, a research economist at the Darla Moore School of Business, said it is "very likely" we're in a recession

A recession happens when there are two consecutive periods of negative GDP growth. Since this growth can’t be measured until after the fact, recessions cannot be confirmed until they’ve already happened.

Applications for unemployment benefits have hit record highs, with 22 million Americans applying as of April 16, according to a Wall Street Journal article.

Ozturk said most of the people claiming unemployment benefits are not permanently unemployed. Many might be temporary layoffs who will be rehired once the pandemic abates.

However, Von Nessen said some of these temporary layoffs might become permanent if the pandemic continues through the summer, causing businesses to lose more money.

During the 2008 recession, unemployment peaked at 19.2% for 16 to 24-year-olds, compared with 10% across the board, according to a Fast Company article. But Ozturk said unemployment is "usually higher" for younger people because they are more likely to move around between companies, among other reasons.

“We hope this is a good conservative outlook, but who knows what's gonna happen next week and how that may improve or worsen the conditions we're expecting, so it's just constantly having to be monitored,” Frank Rainwater, the executive director of the South Carolina Revenue and Fiscal Affairs Office, said.

Rainwater said the state was operating at a surplus this fiscal year, so for right now, the losses only eat into the extra money the state has and not the base budget.

When will the economy recover?

The short answer is, experts don’t really know yet. Everything is dependent on changing data and the course of the virus.

Right now, there are two main possibilities for economic recovery: the “U-shaped” recovery and the “V-shaped” recovery, according to Von Nessen. Both of these scenarios are contingent on when social distancing guidelines are relaxed and what else happens in the coming weeks.

The first scenario, called the “U-shaped” recovery, is slower, with economic recovery starting in the first half of 2021. This would happen if the pandemic and social distancing requirements continue through the summer months, according to Von Nessen.

This path is characterized by more permanent job losses and more bankrupt small businesses, as they might run out of money the longer this goes on.

“The key is how long these businesses can really hold out,” Von Nessen said.

According to the Board of Economic Advisors meeting, the state is currently preparing for a “U-shaped,” or slower, path to recovery, with flat growth from about July until November of this year and then a gradual uptick in growth through the beginning of next year.

Under a “V-shaped” recovery, the economy would begin to recover in the second half of 2020, if social distancing guidelines are relaxed by late spring. This scenario would also preserve some of the tourism season in South Carolina, which would help the state’s economy.

With this recovery, there would be a sharp decrease in economic activity followed by a sharp increase as people begin participating in normal purchasing behavior. Layoffs would remain mostly temporary and fewer businesses would fall into bankruptcy.

“For example, consider an automotive manufacturer that may see a decline in sales activity now, but once people go back to work, all the people that were going to buy cars now are in the market. And so, you basically see a surge in demand during the second half of the year,” Von Nessen said, adding in a later interview that this effect would be diminished the longer the pandemic goes on.

Rainwater said consumers might have to use savings for living expenses, which could prevent a large surge in demand.

“If you were planning to buy a car, but you were in the hospitality industry, you may now have had to use that savings or income for other purposes, and it may take you a while to get back to that,” Rainwater said.

Ozturk said even when social distancing is reduced, things might not necessarily return to normal.

“This is a totally new normal,” Ozturk said. “We may not be in quarantine, we might not be under lockdown, but it is not necessarily going to be, you know, back to normal, good old days, either.”

What can you do right now?

This job market will be tough, and students will “need to be more aggressive than maybe they had otherwise planned on being,” according to Von Nessen.

Helen Powers, the director of USC’s career center, said students and upcoming graduates should “focus their energy on things that are within their control.”

Powers recommended students update job profiles on platforms such as Handshake, work on their social media presence and reach out to people in their network for job opportunities.

“It’s important to know that there are companies still hiring; there are active job postings in our Handshake job portal right now,” Powers said.

According to a Business Insider article, some studies show an estimated 70 to 80% of jobs never end up publicly posted online. Instead, they are passed on through personal referrals, which makes having a good network important.

“The bottom line is that even though searching for employment might feel a little daunting at the moment, opportunities do exist and now is the time to take action and find ways to differentiate yourself from the crowd,” Powers said.

With most of the world suddenly working remotely, this might expand remote work industries that hadn’t initially embraced it. This “new normal” might actually provide some unique opportunities for graduates and other students.

“Just think about graduates from the University of South Carolina, who all of a sudden may have more opportunities with companies in San Francisco or New York or Atlanta or anywhere else, where they can work remotely and live in South Carolina and work for those companies,” Von Nessen said.

Some students have also had summer internships canceled or postponed.

“If a student has an opportunity rescinded, I would ask them to please reach out to our office for support and guidance,” Powers said.

Students can look at the Career Center’s website for appointments and other services, such as virtual drop-ins.

USC alumni can also access Career Center services for free for a year after their graduation.

Through all the uncertainty, Von Nessen said it is important for students to remember that this will not last forever.

“This is not a permanent situation. This is something that we will get through and the economy will recover from this,” Von Nessen said.