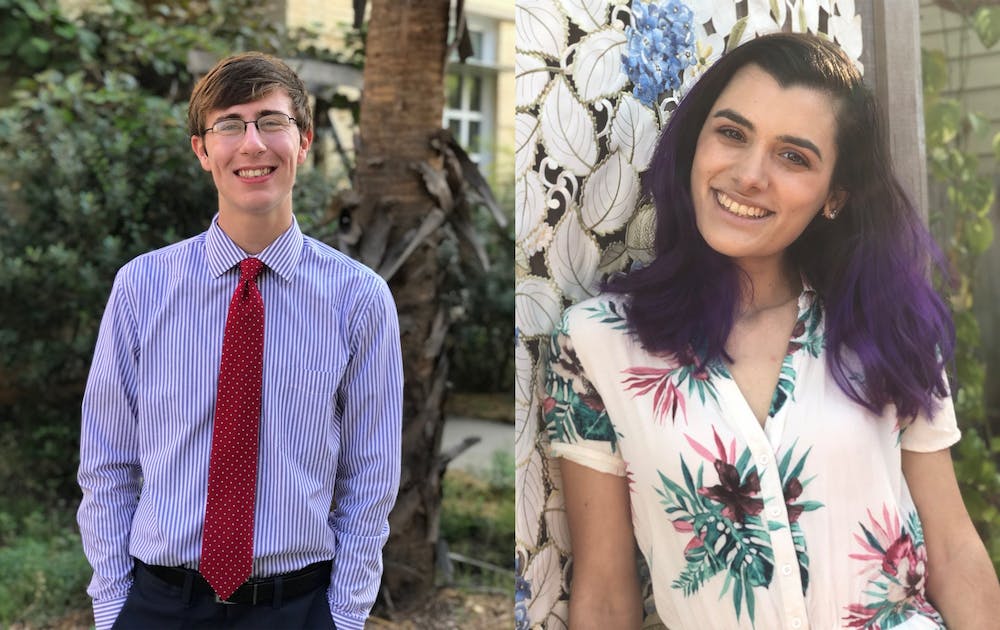 Two third-year students from the South Carolina Honors College won the Goldwater Scholarship, a distinguished award for STEM majors who show promise within their fields. This is the 28th year students from USC have won the award.

Ian Bain and Zoe Screwvala are part of the university’s Top Scholar community, an undergraduate scholarship program consisting of the five most prestigious merit awards, according to the university's website.

Bain, a third-year chemistry and math student, knew he wanted to be a scientist since the first grade.

“[My dad] encouraged all of us to, like, go and read science books and look at math stuff. And I guess I just kind of fell in love with science. Especially knowing how things work from a base level, it really interests me,” Bain said.

Screwvala, a third-year marine science student, grew up in New York City, where she wasn’t around nature often.

“I think observing the natural world was something I never really took for granted. So then the memories I did have of being in nature were always special and stood out, which I think influenced me for wanting to be a scientist,” Screwvala said.

When Screwvala first came to USC, she was in environmental science.

“My first semester actually was what encouraged me to switch into marine science and continue with that. I visited Marine Science 101 as part of the environmental science major, and then talking to other older students who were in marine science ... it just made the most sense to switch, and I stuck with it,” Screwvala said.

Bain also had to decide between differing fields. He said he didn’t initially know what type of science he wanted to become involved with.

“I was deciding in between chemistry, physics and biology. And I didn’t do physics because my brother did physics, which is kind of a silly reason, but I’m glad I did it.” Bain said. “[I thought], 'I think I’m gonna go with chemistry at first and see what happens.'”

Bain credits his research advisor, Parastoo Hashemi, as someone who encouraged him to get into research. Bain recently went to a conference with Hashemi, who is an associate professor in the department of chemistry and biochemistry, and his graduate mentor, Melinda Hersey.

“I was able to meet other professors from different universities, and just, like, get to know people in the field,” Bain said.

Screwvala said Professor Claudia Benitez-Nelson really inspired her at the beginning and became her mentor for physical oceanography research.

Screwvala has completed a lot of undergraduate research at USC. At the start of her sophomore year, she began research to help figure out how mixing in the coastal ocean is happening and how groundwater is interacting with the ocean system.

During the summer after her sophomore year, she did an undergraduate research internship at the University of Alaska.

“That was something that was totally out of my wheelhouse because I had never done glaciology research before, but it was great,” Screwvala said. “It really inspired me to look into ice-ocean interactions.”

“After that, I think that I’m gonna go and get a postdoc and go into academia, become a professor and start up my own lab,” Bain said.

Both students will use the Goldwater Scholarship for tuition, but they said the scholarship has opened many doors for them within the scientific community.

“It’s also connected me to this community of scientists all across the nation, kind of like the next generation of people that are really excited about scientific research,” Screwvala said.