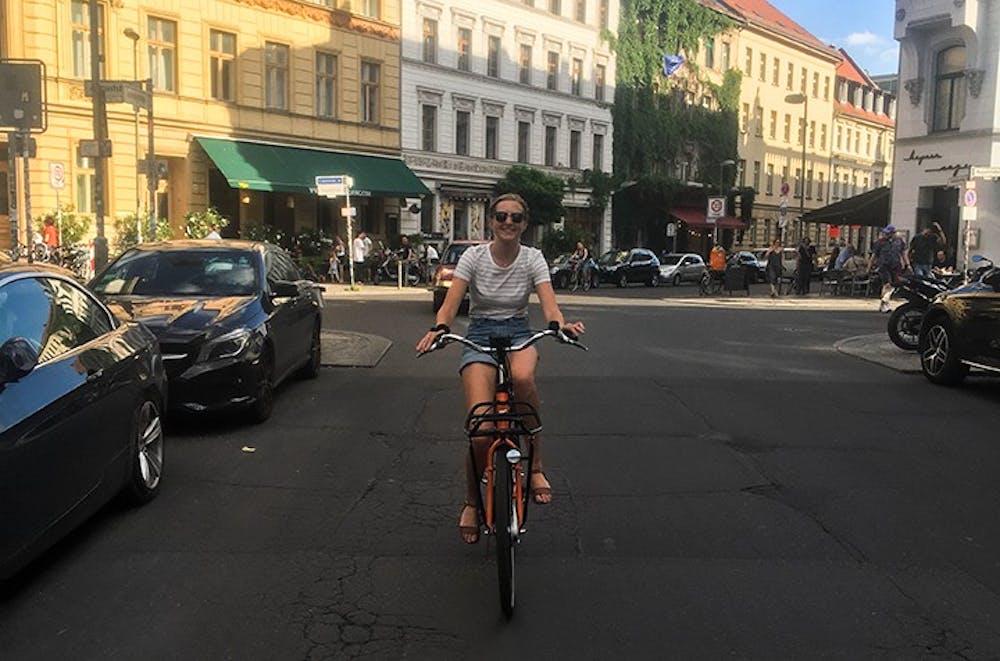 Last summer, class of 2020 alumna Catharine Aretakis was digging through archives in Berlin for answers to a question all but forgotten by history. What she found led to a Fulbright grant.

Aretakis, a history and English student, was in Germany for her senior thesis. She was hoping to trace the fates of a group of black, multiracial children sterilized by the Nazis in 1937.

Little research existed on the subject. According to Aretakis, the only book ever written about the children was published in the 1960s and riddled with inaccuracies. Their story, she said, deserved to be more widely known.

“There are some claims that Holocaust means what happened to the Jewish people and that the other people were victims, yes, but they weren’t victims of the Holocaust,” Aretakis said. “It’s a big controversy.”

Jewish victims account for the greatest loss of life in the Holocaust and are therefore the subject of most research. Other groups have slipped from focus.

According to Theodore Rosengarten, an associate scholar of Jewish studies at USC and Zucker/Goldberg chair of Holocaust studies at the College of Charleston, such is the case for the Afro-German children. Even German historians lacked answers to Aretakis’ questions.

“It’s quite amazing that 75 years have passed since the last mixed-race children were sterilized in the Nazi program of human selection, but the story of this crime against humanity is largely uninvestigated and generally unknown. And there comes Katie,” Rosengarten, the second reader of Aretakis’ thesis, said. “She was on the track to produce I think a work of great importance to German history and to Holocaust studies and a work that also makes a really solid contribution to the ongoing debate about race in Europe, in a changing Europe.”

In April, Aretakis was named a Fulbright scholar for her research. She received a grant to enroll in the University of Amsterdam’s master’s program in Holocaust genocide studies, an area that has interested her for about half her life.

“When I was in fifth grade, I read the book 'Night' by Elie Wiesel, and I couldn’t sleep for three days, and then I kinda just wanted to know more about it, and I still wanna know more about it,” Aretakis said. “The passion never really went away.”

In the fall of 2017, Aretakis approached Rosengarten to learn more about his upcoming Maymester to Germany, titled “Tracing the Holocaust.”

“I have to say I knew almost instantly that she would be an asset for the trip,” Rosengarten said. “After about 20 minutes of talk, she said, ‘sign me up.’”

While on Rosengarten’s Maymester, Aretakis found her thesis inspiration at the Buchenwald concentration camp. She was perplexed by the names of several African nations being listed on a memorial to the camp’s victims. She’d never given much thought to the African experience in Europe and began thinking about how she could incorporate that into her studies.

Accompanying Aretakis on the trip was associate professor of modern Jewish history Saskia Coenen Snyder, who said she had never been to Eastern Europe before and was there not as a professor but as a student alongside the others. Coenen Snyder would soon become a mentor to Aretakis, who would ask her to be her thesis director.

Aretakis said she was ultimately able to piece together the stories of several Afro-German children after finding the transcript of one of the Nuremberg trials that included the names of 30 to 40 children who had been sterilized. From there, she visited camps and archives throughout Germany to track down any documents she could on them.

Coenen Snyder said she remembers meeting Aretakis at a coffee shop after she returned from Berlin.

“The moment I saw her, her eyes got bright," Coenen Snyder said, "and she said, ‘I know what I want to do with my life.'"