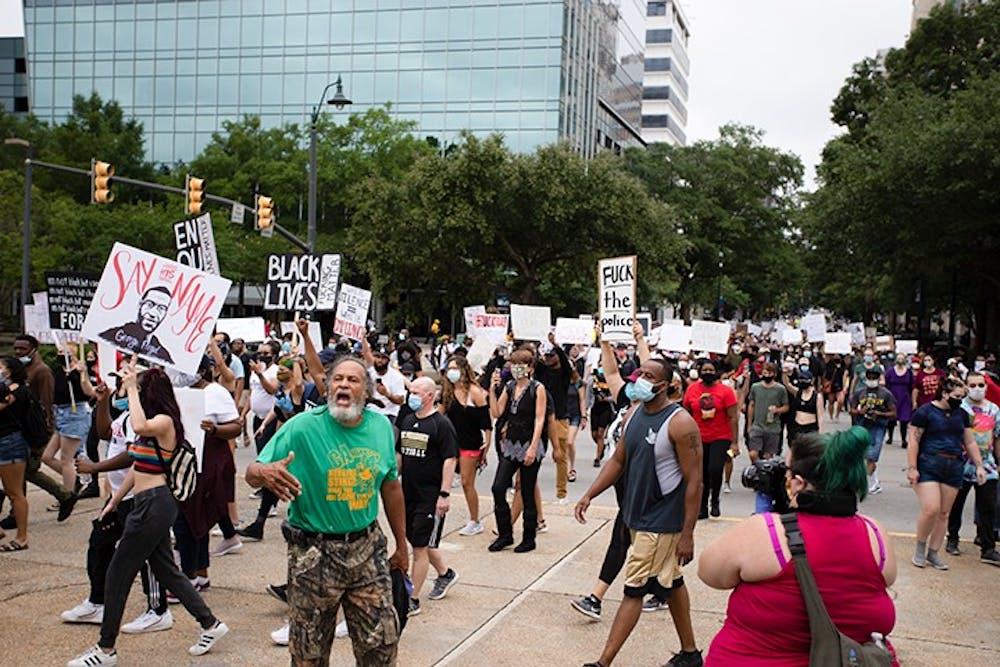 Hundreds of protestors gathered on the steps of the South Carolina Statehouse on Sunday to march in protest of the death of George Floyd. Originally, it was a peaceful protest, but things turned sour after several hours of marching.

Floyd, an African American man from Minneapolis, died on May 25 after a police officer kneeled on his neck for almost 8 minutes.

The I Can't Breathe - South Carolina March began at 11 a.m. at the Columbia City Hall. The protest was organized by Lawrence Dishawn Nathaniel, the founder of National Organization for Change.

“The reason why I’m here is because murder is murder. This young man, George Floyd, was murdered. [The officer] was not arrested immediately; it had to take people going out protesting to wake up America,” Roach said.

About 1,000 people participated in the rally, some holding up signs reading “Racial terrorism is the new norm” and “Dark skin is not a crime.”

Protesters then marched down Main Street and held a rally at the Statehouse at noon.

“I was called to come out to support and listen to the anger of the black community,” Strong said. “I came out to show support and see what it is we can do moving forward so we can stop this kind of stuff from ever happening again.”

Strong believes this was the “straw that broke the camel’s back,” meaning that if change doesn’t happen soon, the African-American community will lose their patience.

Jessica Weaver, a fourth-year media arts student, came out because she’s tired of the recent events.

“Everything that’s been happening is absurd. It’s 2020; we shouldn’t still have to go through this. It’s not 50 years ago, even though it seems like it,” Weaver said.

Mikenzie Turner, a second-year broadcast journalism student, is appreciative of the people who came out to the protest during the COVID-19 pandemic.

“We know the situation of the pandemic, but we just appreciate it so much. Everyone’s still coming out here, risking getting it, and we just thank you all so much,” Turner said.

Just after 2 p.m., they marched to the Columbia Police Department, where events began to escalate.

Police dressed in riot gear as the crowd threw water bottles and rocks. Some protestors lined up face-to-face with the police line.

Protestors also took the flags in front of the police department down and burned them. Washington Street was blocked off with barricades and protestors’ cars. Columbia Police Department cars were also vandalized and burned.

The police used pepper spray and rubber bullets to control the crowd.

At 6 p.m., Columbia Mayor Steve Benjamin announced a curfew immediately in effect for 6 p.m. for the downtown area and the Vista. Other cities in the U.S., such as Atlanta and Los Angeles, have also issued curfews in an attempt to control the violent protests.