A look at changes in Gamecock uniforms over last four years 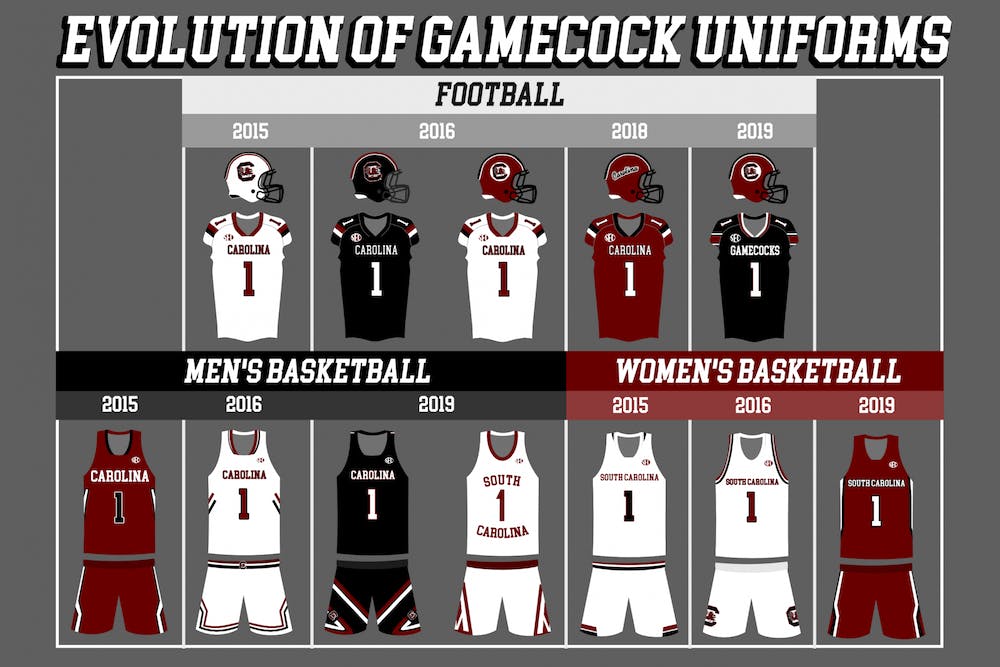 The last four years have seen lots of changes in the Gamecock athletic department. From different coaches, players, facilities and uniforms, not much is the same as it was four years ago.

The change in uniforms across South Carolina sports is mainly due to the new apparel deal that the university signed with Under Armour in 2016. According to The State, it was a “10-year deal worth a total of $71.5 million.” Athletic director Ray Tanner told The State in 2016 that he was "pleased" with the new deal.

“It’s more to me than just a company that we partner with. We have been with them quite a while and he and his staff feel like part of our family,” Tanner told The State.

The Gamecock football team has seen the most change in its uniforms in the last four years. During the Steve Spurrier-era, the Gamecocks rarely wore anything other than their white helmets.

Once the transition to the Will Muschamp-era began in 2016, the uniforms changed along with the coaching staff.

In Muschamp’s first season with the team, he started off the uniform renovation by introducing matte black helmets and garnet helmets, both similar variants of the white helmet.

In 2018, the team adopted a new garnet helmet with a black script “Carolina” on the side. The helmet was an homage to the 1980s team under then-head coach Joe Morrison.

Before the start of this past season, the team unveiled the highly anticipated black magic uniforms.

The uniforms were inspired by the threads the 1984 Gamecock football team wore under Morrison. The team was famous for rising to No. 2 in the polls that season.

Initially planned to be a throwback for special occasions, the Gamecocks ended up wearing a different variation of the black magic uniforms throughout the season, and the black jersey became the team’s standard black uniform.

Muschamp told Jamie Bradford of 98.9 FM in Charleston that the black magic uniforms were his favorite, and when Under Armour approached him about doing a throwback uniform last offseason, he said, "Just take the 1984 uniform and just do it." The throwback garnet helmet became the team's dominant garnet helmet for the season and was worn during the upset against Georgia in Athens.

The Gamecock football team wasn’t the only team that received new uniforms over the past four years. Both the women’s and men’s basketball teams have made slight changes to their uniforms, though the men’s uniforms had the biggest changes.

In the 2015 season, the men’s team had uniforms with larger lettering for the “Carolina” on the front that was in a different font from the uniforms seen today. Prior to the 2016 season, the team unveiled a new look.

These jerseys adopted the font seen on almost all Gamecock jerseys today and made the “Carolina” across the front and the numbers on it smaller.

Otherwise, the men’s uniforms have seen few changes over the past four years, though this year's uniforms saw new stripes that run diagonally from the back of the shorts, forming a triangle-like pattern.

Along with the changes to the main uniforms, the men’s basketball team also introduced a new throwback uniform. Inspired by the 1970s-era Gamecock teams that included South Carolina greats such as Alex English, the jerseys say "South Carolina" instead of the current “Carolina.” The wording is also above and below the numbers and has a similar font to the jerseys from the '70s. Fans got to see this jersey a couple times this season, including at the upset win over Kentucky at home.

“I think folks who have been a fan of Carolina basketball for a long time are going to enjoy the uniqueness of the uniforms," Martin told GamecockCentral in October of last year. "They’re real classy. I know when I first saw them, I was like, ‘Wow, that’s big time.’ I think it’s a great idea to celebrate the people who come before us.”

The national championship-winning women’s basketball program, on the other hand, has only seen minor changes to its jerseys since 2015.

The last major change for the women's team was in the 2016 season, when it started wearing the updated jerseys similar to the ones it wore this season. Since then, the only change to the team's jerseys has been the additions of stripes down the side of the uniform.

Other Gamecock sports have seen new uniforms over the last four years, but the differences haven’t been as drastic as the football and basketball uniforms.

As long as South Carolina is an Under Armour school, there’s no doubt the Gamecock teams will continue to see new and improved uniforms in the future.