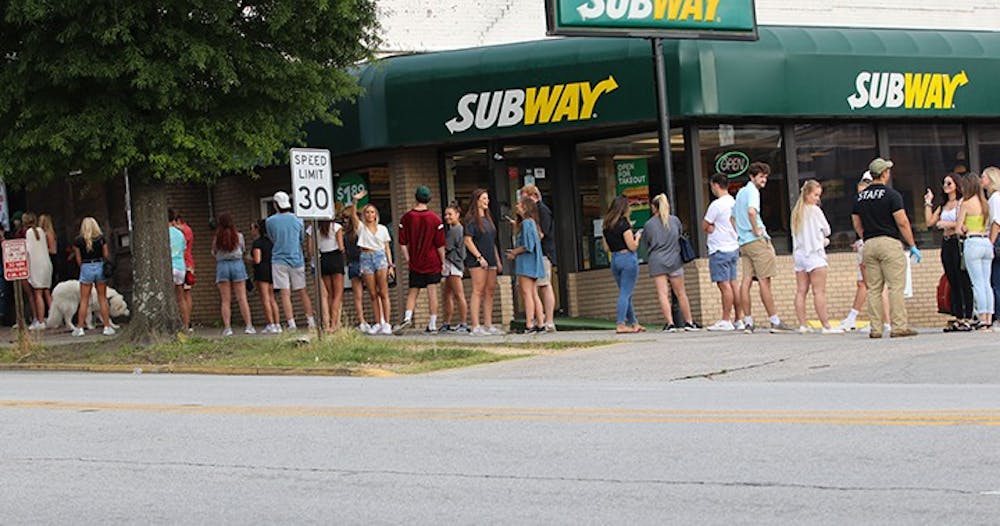 Several popular bars and restaurants in Five Points have reopened in the past weeks, causing a mixture of hope and concern among owners and city officials.

Initially, South Carolina Sen. Dick Harpootlian said there were reports of young people “bunched up outside” some establishments.

“They don’t have face masks on, and there’s concerns that this is going to contribute to a relapse of the disease,” Harpootlian said.

Harpootlian also said restaurant owners should be responsible about reopening.

“While they may make a buck off of this, if they contribute to the spread of this disease, it's going to be a short term buck,” Harpootlian said.

On the ground, though, some restaurant owners are embracing caution, going beyond Gov. Henry McMaster’s requirement of remaining at half capacity.

Publico, for instance, had a two-week training session for its staff on CDC guidelines. New principles, such as hiring separate employees for delivering food and cleaning tables, are also being implemented, Michael Duganier, owner of Publico, said.

“There's a lot of different things that were put in place, and they're not difficult. We just want to get our team back together and kind of have a little re-grand opening group together,” Duganier said.

In addition, face masks and multiple gloves will be worn by all employees, Duganier said.

Jake’s Bar & Grill opened its doors to customers on May 4, exploring the difficulties that come with managing a restaurant mid-pandemic.

“Sometimes, we’re having to be the bearers of bad news and asking people to separate a little bit,” Sears said.

Sears said the bar is also "heavily sanitizing" and limiting the number of people who can sit at a table to six. Employees, however, are not required to wear masks.

"It’s kind of a personal thing, I don’t really want to make them do something that’s uncomfortable or not mandatory, so I left it up to them," Sears said.

Additionally, some students are thankful the bars are reopening. A group of three friends recently voiced their support for being allowed to return to Five Points.

"I would say it's important to have some things opening up to give people this kind of rejuvenating feeling, like some things are back to normal," USC alumnus Hunter Strangis said. "I think that's really healthy, and I think it's been done really well, probably better than some other areas."

Strangis graduated with a marketing degree in May.

According to Columbia City Councilwoman Tameika Devine, there are concerns about how businesses are managing customers, though.

“Yes, there are a lot of people who are not following the guidelines and not social distancing, but it's really hard to regulate that kind of behavior, especially on public streets,” Devine said.

With this in mind, Five Points will be patrolled by the Columbia Police Department, which will be "vigilant" in maintaining social distancing standards, public information officer Jennifer Timmons said in an email interview.

“We will self-initiate when we see unsafe or non-compliance of health safety measures. Officers will also respond to citizen’s concerns within an appropriate time frame based on emergency calls for service,” Timmons said.

When self-initiating, officers will use a verbal warning, followed by a written citation, according to Timmons. Still, because social distancing guidelines are only guidelines, and not laws, officers may not be able to enforce them to the full degree.

“I think our officers have tried to monitor it and try and support the bar owners, keeping the lines from getting too long and people standing, bumping in line, but based on what I saw even this past weekend, I think that's still happening,” Devine said.

Action is being taken on a city level to encourage social distancing. Public signage and PSAs are both being considered, but not more than that, Devine said.

“What we’re hoping to do is more encouraging people than moving forward with any kind of mandate,” she said. “We’re hoping that that's not necessary and actually there's probably some questions as to whether or not we have the right to do that.”

The city is striving to continually push out correct information regarding the pandemic, according to Devine.

And there is hope, even among concerns of a resurgence of COVID-19, that restaurants reopening is a step towards a regular world.

“We just can’t wait to see our neighborhood again,” Duganier said. “Hopefully the kids are coming back this fall, hopefully football happens, hopefully things get back to normal.”