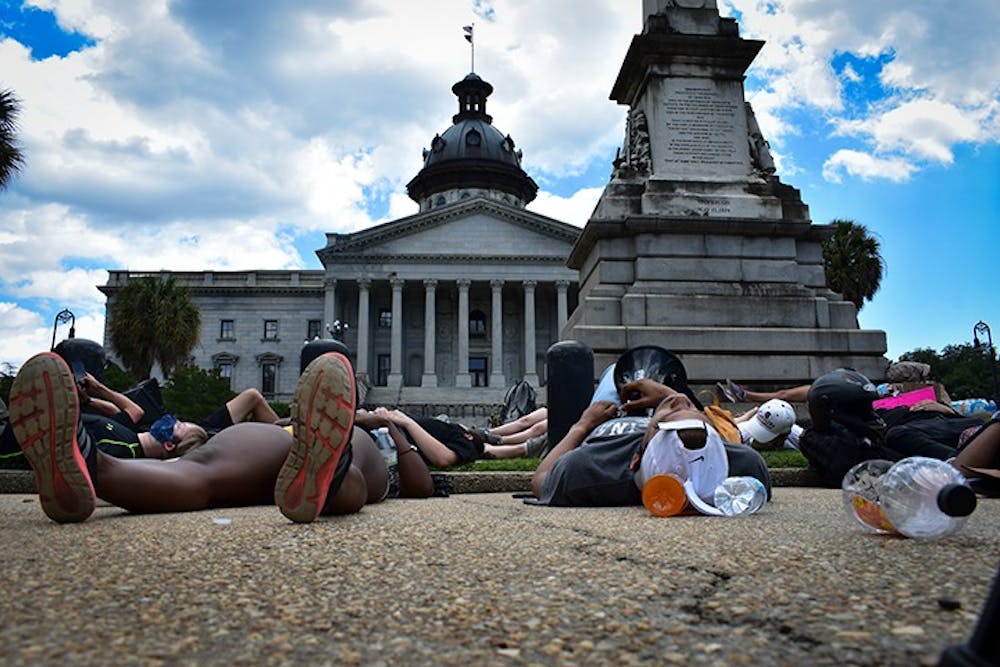 In what marks the third day of protests in Columbia, people gathered outside the Statehouse at 2 p.m. for a “Die-In” where protesters laid on the ground for nine minutes and chanted “I can’t breathe,” the last words of George Floyd who was murdered by a police officer in Minneapolis.

This afternoon’s protest carried a very different tone than the previous two days’ violence, when cars were set aflame Saturday and protesters were tear gassed Sunday.

“I saw [an officer] smiling and stuff, laughing at us. Then he started shooting, busting a water bottle and all,” one protester said about yesterday’s chaos. “They started closing in, so we was stuck right here. Everybody started dipping.”

Yesterday’s events left lingering fear in protesters, as one said he couldn’t sleep all night because he couldn’t stop thinking of the violence, and another said the mere smell of a burning candle put her on edge.

“It was like we were at war, but a one-sided war,” protester Taylor Hughes said.

Mayor Steve Benjamin says he is looking into the way events unfolded in yesterday’s protest, as many have said it was the police who started the violence.

“We’re going to take a look at everything,” Benjamin said. “I want to get to the bottom of all the different stories I’ve heard.”

Today’s protest, however, remained peaceful. Water, snacks and masks were provided by various volunteers. Among them were students from fraternity Omega Psi Phi at South Carolina State University and medics with red crosses taped onto their clothes.

Many USC students were in the crowd of protesters, including USC student Kami Ufford. In order for the protests to end, she said, there must be an overhaul of the entire system, including the prison system.

“We need to replace it with a system that’s focused on rehabilitation and restoration because those methods of correcting crime makes society safer than it is right now,” Ufford said.

For some protesters, the importance of the demonstrations is more personal. Protestor Twinn said one of his friends was shot 18 times by a police officer and is the reason he’s protesting today. For Hughes, it’s her family.

Despite the presence of snipers on the roof of the Statehouse and the helicopter overhead, USC student Marnija Lewis said today's protest was more calm than last night's.

“I’m so tired of seeing us in the media, dying, our bodies slain,” Lewis said. “Today is much more peaceful for what it seems, and I’m glad about that.”

Indira Glennon, one of the protest leaders, said as someone who is mixed, it can be hard to find a place to belong.

“I feel like I’m less than. I feel like I have to prove myself a lot to people,” Glennon said. “It hurts because I want people to not look at me that way. I want them to see me for my value, for what I’ve accomplished in life, and that’s not how people see me.”

White allies, including medic Morgan McLeod, say they protest to protect black lives and uplift the voices of those oppressed.

The Aristocrat, a bar on Washington Street, opened up first aid and is a designated safe space for protesters. Bail funds have also been set up for those who are arrested, and medics are helping protesters contact pro bono lawyers if needed. Today's protest saw two medics get arrested by officers in full uniform, leading to unease in the crowd. The charges are currently unknown.

Police have walked through the crowd. Protestors are peaceful. pic.twitter.com/KagWZgjcrd

Lawrence Nathaniel, who organized the initial march and today’s “Die-In,” said for things to change, there must be police oversight. He and other leaders passed out a list of demands at the protest, which included a “District Base Community Police Oversight committee” that’s at least two-thirds community members.

“The point of this board is to help dissect the data so that way we can figure out the problems in the community and fix them, ‘cause removing people out, that’s not the problem. Resources and the lack of resources are the problem,” Nathaniel said.

A list of demands handed out by protest organizers: pic.twitter.com/TkU621J4b6

Nathaniel said he intends to continue planning protests until they get all the answers they want.

“If protesters are there and peaceful, you do not agitate them,” he said. “That is their right in this country, and that is the reason why our ancestors fought for our right as African Americans.”