Students move out of on-campus residence halls amid coronavirus pandemic 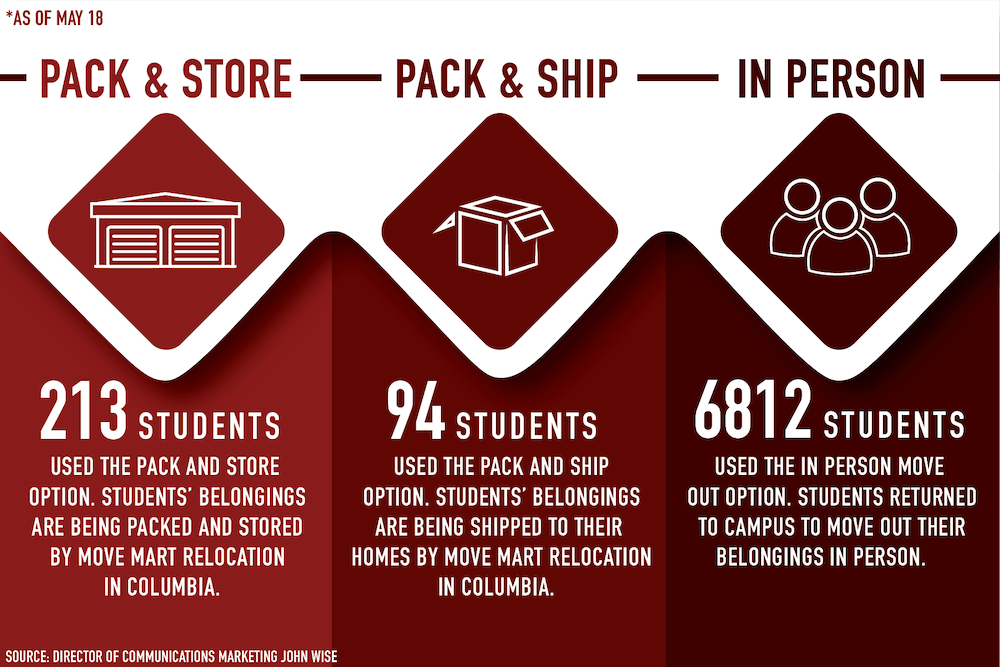 When USC announced the closure of residence halls, students were asked to take “essential belongings” and return to their permanent home — leaving many belongings behind.

Carly Clark, a second-year art history student, chose the pack and store option. She did not want to risk her health and the health of others by driving 9-and-a-half hours to Columbia.

“We just didn't feel comfortable driving down and staying in a hotel, risking bringing something down there to other people, as well as coming into contact with that many people on the road and in a hotel,” Clark said.

Clark was one of 213 students who chose the pack and store option.

Josh Wise, director of communications marketing for housing, said housing knew more students would choose the in-person move-out option, but it was important for students to have “some type of option.”

To identify students’ belongings, Resident Life staff members would walk through student rooms while on video call with the student and tag items based on the student’s preference. Items could be packed, donated or thrown out.

A staff member would then return a second time to give the moving company access to the room to begin packing.

For the 94 students who chose the pack and ship option, the cost to ship boxes varied depending on the weight and the destination of belongings. The cost of shipping started in “upper hundreds range to $1000 range,” according to Wise.

“What we did is we gave you a phone call to give you an estimated cost of shipping to your location that gave people the opportunity that if the cost exceeded what they chose then we can obviously visit straight into pack and store,” Wise said.

Wise said this was not one of the better options, but it was the only option for some students.

If a student's belongings were damaged during the pack and ship process, the next step is to file a claim.

The claim process includes sending photographs of belongings along with a description to the university. This will also be sent to the moving company.

When the claim process is finalized, damaged belongings may be replaced or repaired, according to Wise.

But the majority of on-campus residents chose the in-person move-out process.

Patrick McAuliffe, a second-year journalism student, was one of 6,812 students who chose the in-person move-out option.

McAuliffe chose to wear a mask when he was moving out of South Tower.

“I was kind of surprised walking in that there wasn’t anyone working in South Tower to be like 'No, stay apart from each other, don’t crowd up' or anything like that,” McAuliffe said. “There was no one saying keep your mask on. No one enforcing any kind of social distancing or anything, which was surprising.”

Wise said masks were encouraged but not required. The university housing staff was wearing masks during the move out process.

“We're really working through a unique situation right now,” Wise said. “I believe that while all the options were not all great for everyone, we at least provided options, opportunities for folks to retrieve their items in a safe manner.”

Statistics regarding the number of students who chose each option are current as of May 18.