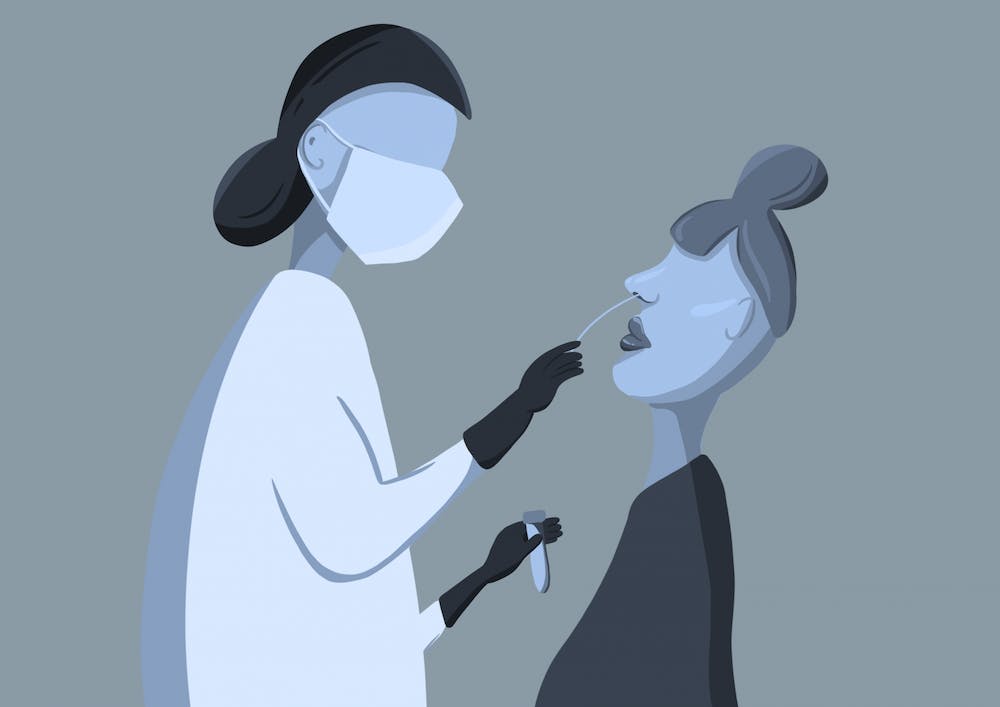 By Nick Sullivan , and Jack Bingham

This story was updated at 3:39 p.m. on July 1. An earlier version stated the university set its threshold for handling new COVID-19 cases at 150 per week. In a follow-up interview on June 29, Deborah Beck said this was incorrect. University spokesperson Jeff Stensland clarified that 150 represents the number of new cases the Student Health Center can handle without making adjustments to its operation. This story and its headline have been updated to reflect this.

Director of Strategic Health Initiatives Rebecca Caldwell likened USC at the beginning of fall to a cruise: We “want the cruise ship to leave the harbor as free of infection as possible.”

As people return to campus throughout the summer, the university has launched a series of COVID-19 testing initiatives with the goal of testing all students, faculty and staff. It is not a requirement for everybody be tested, but testing does play an important role in tracking and limiting the virus’ spread.

The university has been conducting high-volume testing since June 1.

“We're trying to do that test several days before students, faculty or staff are returning to campus so that we can catch anyone who was positive before they are on campus and potentially spread it to others,” Beck said.

On each of these high-volume testing days, USC can conduct up to 300 tests within the Student Health Center. On select days, the Medical University of South Carolina will partner with USC for drive-through testing, which has the capacity to test about 500 people per day, although Caldwell estimates that number could increase to 700 or 800 with some tweaking.

"Now that we’ve done both of these types of tests, we have ideas about scheduling and flow to make easy adjustments," Caldwell said in an email. "The university also has several other testing options in the pipeline that may majorly expand our mass testing capacity and get results even faster, so stay tuned."

Outside of high-volume days, tests are available at any time for those with symptoms and can be scheduled by calling Student Health Services.

Even with testing, Beck said USC and surrounding hospitals only have a certain capacity to hold those infected with COVID-19. Based on epidemiology models from USC’s Arnold School of Public Health, the university can handle approximately 150 new cases per week without having to make changes to Student Health Services, such as increasing staffing or rescheduling non-critical appointments.

However, Beck said COVID-19 is a constantly changing disease.

“As we say, the virus is a novel virus. It could change, and we could have more cases than what we anticipate, or we could have less cases,” she said.

When considering getting tested, Caldwell said there are a few things to remember.

The first is that the tests are done at no cost to the person being tested. While charges are a “moving target”of between $50 and $100, this amount is charged to a student’s health insurance, or, if a student is uninsured, a pool of federal funds.

“People without insurance should come on as much as anybody else,” Caldwell said. “But we are gonna ask you, do you have insurance? And if so, we’ll take your card, we’ll start with your insurance, then we’ll try to look for some federal funding.”

In addition, Caldwell said, COVID-19 symptoms are not immediately visible upon exposure.

“Just because you test immediately when you find out you've been exposed, if your test is negative, it doesn't mean you're necessarily clear because it takes a while for enough COVID to basically replicate in your body to get a positive test,” Caldwell said. “Around day five is the most typical day after they get infected for someone to start to develop symptoms and to have enough virus in their body to test positive.”

Anybody who tests negative is still recommended to monitor their symptoms and follow through with the 14-day quarantine, because COVID-19 can take up to 14 days before yielding any symptoms. Because of such scenarios, Caldwell said, students can be tested multiple times.

If a test does come back positive, the tested individual will be immediately called, and contact tracing will begin.

“If you test positive, we're going to ask you, ‘Who have your close contacts been within the last 48 hours?’” Beck said. “Then we will contact those individuals and not give them your name, but just say, ‘We understand you have had close contact with someone who tested positive for COVID,’ and then we will offer testing and resources.”

Testing is being done in conjunction with the university’s Return to Work Plan. Further testing days are scheduled for June 17 to 19, 22 to 26 and at least every Wednesday throughout the months of July and August. Testing will also be conducted from August 10 to 18 for incoming and returning students. Sign-ups for June testing at USC can be found here.