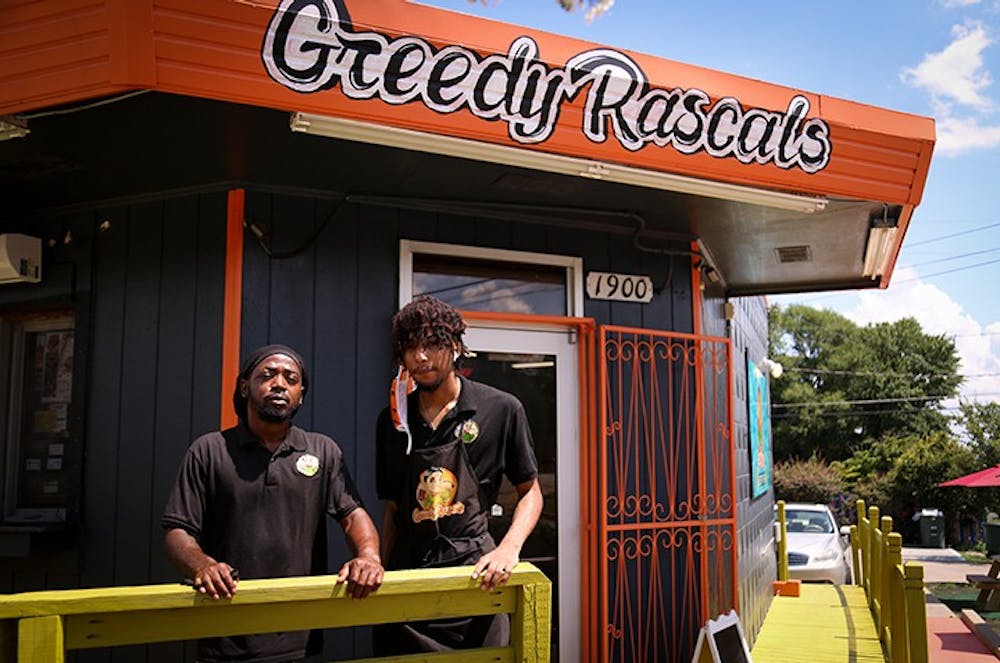 At least, according to the owner of Greedy Rascals, which he describes as a “gourmet hotdog premium casual restaurant” located on Rosewood Drive.

“Everybody has a hunger for something,” Brandon Johnson said. “My hunger was always food, so I consider myself as always greedy.”

The restaurant caters to overindulgence through its menu of offerings that Johnson said can’t be found anywhere else: salmon burgers, vegan slaw dogs and donuts smothered in fruity pebbles. The Bucky burger — which, like the restaurant’s name and logo, is a nod to “The Little Rascals” — is sandwiched between two donuts. Even a regular hot dog brings something special to the table.

“You can get a hot dog anywhere, so I come with the brioche buns. My buns, you never see nowhere around,” Johnson said. “My chili is out of this world. It’s homemade. Everything is homemade.”

Donuts and waffle dogs are made-to-order, allowing customers a variety of toppings to choose from, including powdered sugar, syrups, cookies, cereals and fruits.

Johnson likens the selection to gourmet-style fair food that is well-suited for college students and their wallets.

“Just because you're in college, you still want to go somewhere nice, but cheap, but still be able to take your girlfriend with you and she won't say you bummin’ out,” Johnson said.

USC students can add a free bag of chips and a drink to their meals when they show their CarolinaCard. The most expensive item on the menu is $7.50, but everything is displayed and dressed up in a way that feels like a five-star experience, Johnson said.

He has a long history of working with food and experience to pull from. Before opening his business, he’d worked as a caterer, and before that at his family’s soul food restaurant.

According to his mother, Diane Peters, he used to wake up early as a child to make breakfast for her and his older brother. His interest in cooking began at home.

“He kind of hung around the kitchen when I cooked and also when my mother cooked,” Peters said.

Johnson is now passing his skill down to his oldest son, Brandon Brown. Together, the two make up the entirety of the location’s staff.

“[When] my dad told me he had his dream, I was gonna be the first one there to support him,” Brown said. “Just knowing that we’re doing something together, and it’s successful, it really means a lot.”

Working with his father has taught Brown how to talk to and deal with customers, he said, which is the aspect of the job Johnson enjoys most.

Where customer service is concerned, Johnson compared Greedy Rascals to a "secondhand Chick-fil-A." They're always smiling and making sure they serve their food correctly, and they take Sundays off as a day of rest.

Greedy Rascals offers the best customer service around, he said. The hot dogs are also the best, as is the chili.

For customers looking to try something new, Johnson has one piece of advice: “Whatever you do, stay greedy."