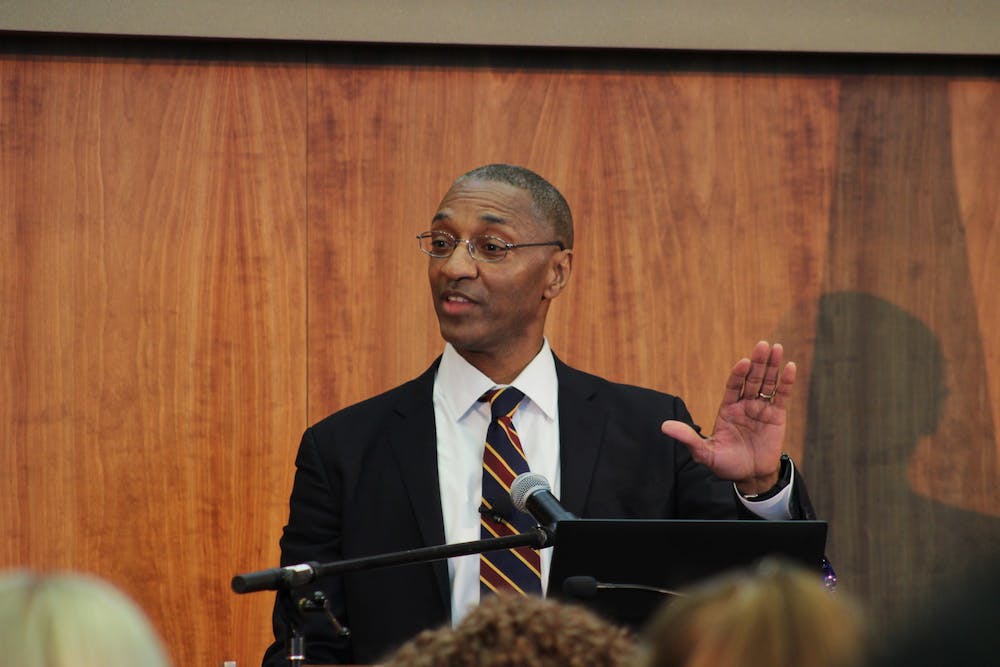 Fair warning — if anyone asks Provost William Tate a question, he will respond with a question.

"Before we know it, we're in this dialog, and you're going to learn more about really what's happening than if I just answered your question in a perfunctory fashion," Tate said. "So to me, it's the ultimate respect.”

Using the Socratic method, Tate said this engagement helps increase transparency and gives more insight into what he is thinking.

Before Tate was selected to serve as the provost, he was the vice provost for graduate education and the dean of the graduate school at Washington University in St. Louis (WashU). The previous year, Tate was one of the finalists for USC's president position.

Tate took over the provost position at USC on July 1. Tate is the first Black provost at USC and one of the first in the SEC.

Up until July 1, Tate was part of the decision-making at WashU while also sitting in on meetings at USC.

For the fall semester, WashU chose to stagger students' arrival to campus with the last day of classes in December. USC is ending face-to-face instruction at Thanksgiving.

Tate said that WashU and USC made decisions based on the epidemiological information for each particular region.

Tate said it will be "fascinating" to see the different strategies unfold, not only as an administrator but also as a parent.

Two of Tate's children are currently attending WashU, one as an undergraduate and one as a graduate student.

Lori White, president of DePauw University, said that with two kids in college, Tate has a good sense of what the undergraduate and graduate experience is like. White served as vice chancellor for student affairs at WashU when Tate was the dean of the graduate school.

Due to the coronavirus pandemic, Tate's priorities have shifted. His focus is to stabilize the higher education system.

As an epidemiologist, Tate said there are three stages in a pandemic for the higher education: stabilization, evaluation of what happened and the reallocation of resources.

“The University of South Carolina will exist hundreds of years from now," Tate said. "What I'm really talking about is how we're going to make sure we get everybody on campus safe, keep them safe and allow them to study and learn and grow in ways that they may have envisioned or as close to that as we can possibly get.”

As provost, Tate will help carry out the strategic plan the university rolled out for 2023. It includes increasing affordability for in-state students, cultivating "a world-class faculty and staff" and becoming eligible for the Association of American Universities (AAU).

The AAU is an invitation-only organization that includes 65 "distinguished" research universities.

Holden Thorp, editor-in-chief of Science Family of Journals, said Tate will "move USC up in its level of academic ambition." Thorp was the provost at WashU when Tate was the chair of the Department of Education in Arts and Sciences.

Affordability is often a barrier to the accessibility of higher education.

“I think that partly what we have to do is double down on how we support residents who have before might not have been able to afford to come to the University of South Carolina," Tate said.

Part of Tate's role as provost is to manage the budget. Students want transparency about the cost of education, including additional fees, Tate said.

“I 100% do not want fees or the cost parameters once a student is admitted to prohibit them from fulfilling their dreams,” Tate said.

Barbara Schaal, former dean of the arts and sciences faculty at WashU, and White both said Tate always thinks about the students first when he makes decisions.

“He is fiercely dedicated to student success, particularly students who have been historically underrepresented in higher education," White said. "So as provost, he certainly will work with faculty to increase access, to identify additional faculty from underrepresented backgrounds."

To work towards AAU eligibility, Tate said the university will need to support current faculty in their research and think carefully about who is hired.

“The key is hiring good teachers who actually are outstanding researchers, and that is a number one priority for me,” Tate said.

“We have these interdisciplinary areas that are viewed as the top. We have to use that to leverage our brand, and it doesn’t fit into neat boxes like a department. It’ll be bigger," he said.

For Tate, understanding the culture and traditions at USC is something he looks forward to most in starting his position.

"It helps you really have a great experience because these jobs aren't technical. They are 99% cultural," Tate said. "Understanding what you value in other students in the history and the traditions makes a big difference."