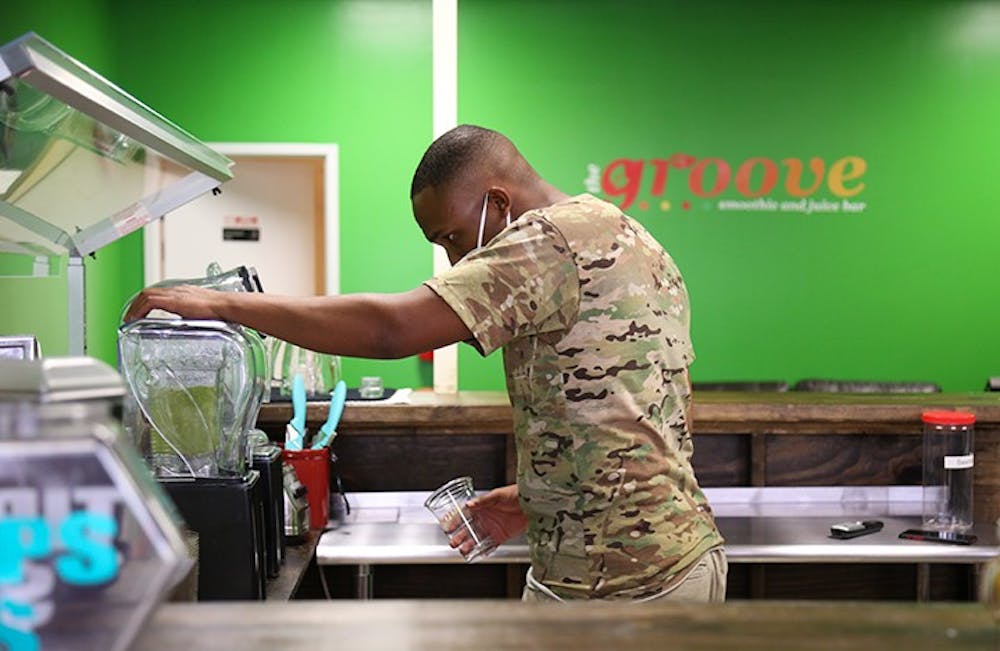 Roughly a decade into his military career, Darius Johnson was ready to mix things up.

He’d always pictured himself running a business, but he wanted to bring something new to the market. His work needed to have purpose, and for him, that purpose came in the form of ‘70s, ‘80s and ‘90s music.

Now, when he isn’t training with the South Carolina National Guard, he is blending smoothies at his old-school music-inspired smoothie and juice bar, The Groove.

"I used to deliver the newspaper growing up, down in a little small town called Bamberg, South Carolina, and my dad would always play the ‘70s and ‘80s,” Johnson said. “Listening to old school music kind of gave me a good idea, and it taught me a lot at a young age just about soul music, music that meant something.”

Those same songs still “put [him] in a good place” when he hears them today and serve as the inspiration behind The Groove’s menu: Smooth Operator, Juicy Fruit, Midnight Train to Georgia and Sweet Love are just some of the drinks named in honor of his childhood favorites.

According to Andrea Butler, The Groove’s social media manager, the store playlist includes all of the songs the drinks are named after.

“I just always want my customers to feel like the smoothie shop is an escape for them to be able to get away from reality and just listen to some good music and enjoy some healthy vibes,” Johnson said. “I want people to sing the songs as they're ordering a smoothie.”

Store manager Kimberly Harris said the shop has a “welcoming feel” that falls somewhere in between a typical mom and pop shop and a big corporation.

“You can see the personality in the individuals, and you feel it when you’re here. It's part of the experience,” Harris said. “You have individuals who come here just to listen to the music or, you know, to enjoy the music or dance a little bit while they're waiting on their smoothie to be made.”

Even before The Groove moved into its building on Garners Ferry Road, Harris was a part of the conversations about what the business should look like. “She’s been a great asset,” according to Johnson, who said assembling his team of committed employees was essential in getting his business off the ground.

Johnson is one of three co-owners alongside Corey Giddeon, a fellow National Guard veteran, and Wes Bellamy, who met Johnson while the two attended South Carolina State University. Together, Johnson said, the three combined their ideas and “made it happen.”

“He's a really artsy person,” Harris said of Johnson, who approached the other co-owners with the business idea. “He's a very, very big visionary, and he is a lover of the arts, so he had an idea of things being bold and having a place that was very similar to a Starbucks, like an internet cafe type of feel.”

For Butler, being a part of a Black-owned business team has been "refreshing" in today's political climate.

“We've always been a Black-owned business, but now it's, it seems like it's acceptable to say, and where we can finally be proud of who we are,” Butler said. “We can't change the way that we were born, but now that people are accepting of us, they're willing to support us, even just spreading the word, a simple share on Facebook, all of those things matter to us because it shows that you're supporting us in any way possible.”

As his business settles in after its November opening, Johnson has gotten his daily motivation from his daughter, to whom he has been a single parent since her mother was deployed. He wants to be remembered for something, he said, and he wants that something to have a positive impact on his daughter's future.

The Groove offers 20% off every Monday to veterans with proper ID and 10% off daily to all military, first responders, nurses and educators. Customers can customize their own smoothies for $5 every Friday. In the future, Johnson said he hopes to feature live music to highlight the local talent in Columbia's local colleges.