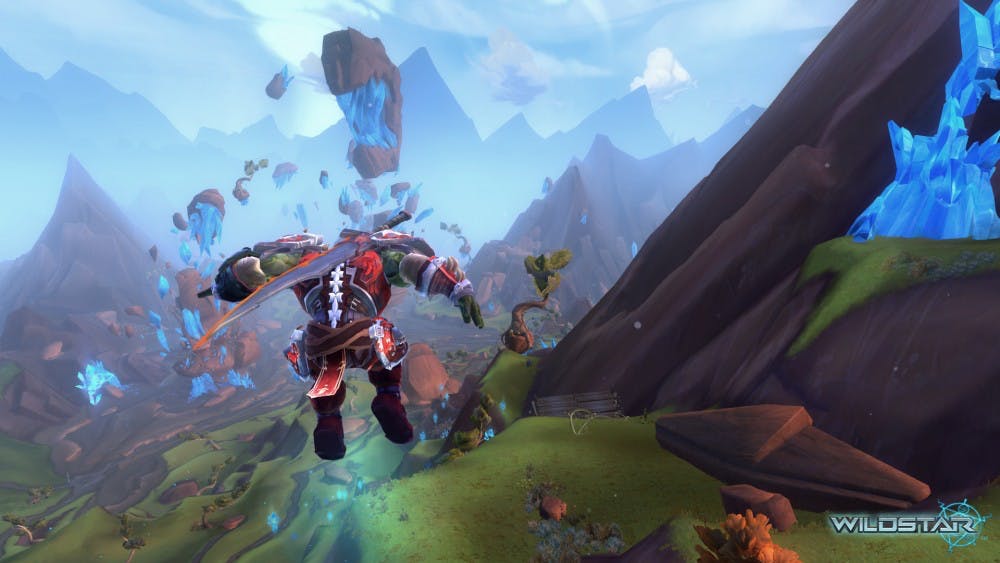 My first steps on Nexus were intriguing. The mountains in the distance were far and vast; the remnants of our crashed spaceship littered in the snow, all to the sound of native creatures slaughtering what remained of our crew. “WildStar” brings new ingredients to the MMO recipe, but still feels familiar enough to make the player feel comfortable.

“WildStar” has a strong emphasis on quick, impulsive gameplay, and achieves it with its intuitive telegraph system. Essentially, all skills in your arsenal cover a certain amount of space. So the gamer has to aim their skills to hit the target, much like an action game familiar to console gamers.
The system for the most part is a resounding success. It feels good to rapidly input commands, and have to work to actually make them effective. It’s a refreshing take on Massive Multiplayer Online (MMO) combat, seeing as how the majority of games on the market have the player simply target an enemy and mash keys on the keyboard until the opponent is dead.

Leveling in “WildStar” is the game’s weakest link. It averages a normal player three days of time played to reach the game’s max level of 50. It was disappointing how bored I became with the game once I reached level 30. To put it simply, the questing experience is heavily uninspired. Most quests have you do basic tasks, such as kill 20 wolves, gather some flowers or run from objective A to objective B. It’s a shame because the game’s world design is absolutely breathtaking. You can tell how much time developers spent adding small details that really give Nexus life. The game’s lore is also incredibly interesting; the characters have a humorous charm that is enjoyable if you’re willing to search for it in the game’s lackluster questing system.

An MMO is all about finding a group of people you work well with, and taking on the game’s most difficult content. “WildStar” has done the best job with group Player vs. Environment (PvE) content out of any game I have ever seen before. The five-man dungeons are difficult. My friends are I were not able to quickly breeze through the content like we would in “World of Warcraft” Instead we had to analyze every encounter, and plan how to approach every situation as a team. The experience is an absolute thrill, and the rush of downing a difficult boss after being horribly destroyed by it prior is exhilarating.

“WildStar” also includes a robust crafting system that is still new to me even after I have spent so many hours creating items. If you enjoy spending hours gathering materials, checking prices and making a large profit, then “WildStar” gives the player plenty of opportunity to do so. The system is easy to learn, but difficult to master, and there are plenty of item recipes to keep gamers busy for months to come.

Player vs. Player (PvP) content is appealing at first,but is actually a slobbering mess once you start messing around with it. The game has created fluid combat that you would think would make battles against other players exciting, but it is actually a gigantic cluster of people stacking their attacks in a blind frenzy. There is little to differentiate skill, as it is impossible for the player to decide what telegraphs to avoid, and what telegraphs they can take. There are also class balancing issues that are frustrating, and limit players on how they want to approach the game.

“WildStar” is a great game that has a lot of potential, but it feels like the same old song and dance gamers are used to with some new mechanics to try and freshen up the genre. I would recommend this game if you’re waiting for the next “World of Warcraft” expansion to be released, or if you are waiting for “Destiny.” I will be spending my summer in Nexus, but after that, who knows.