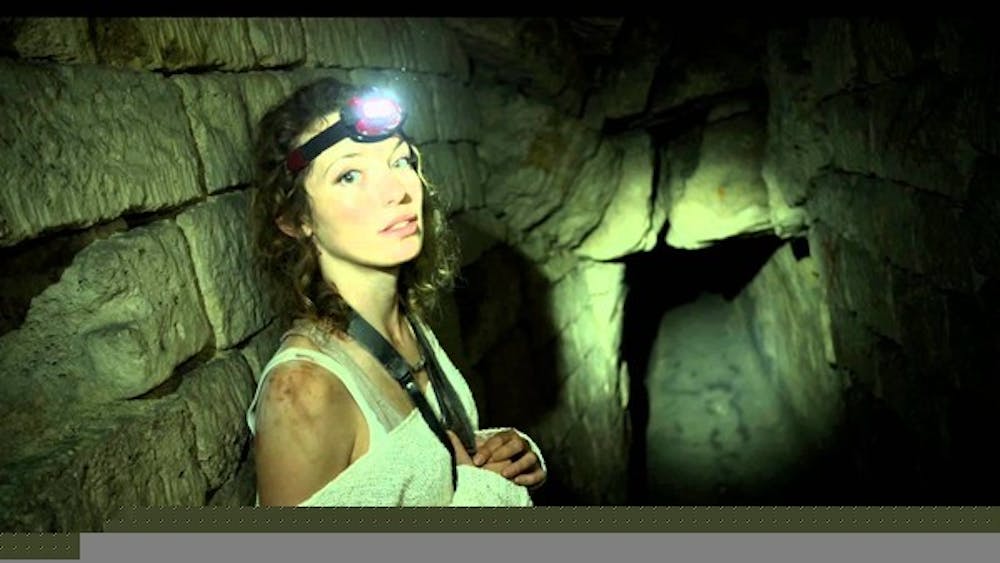 “As Above, So Below” is a suspenseful, mysterious and clever movie that is ruined by more-recent, found-footage film clichés.

The movie follows the adventure of a witty, yet slightly impulsive archaeologist, Scarlett (Perdita Weeks), who is trying to finish her father’s work by discovering the Philosopher’s Stone. She leads a rag-tag group into the depths of the catacombs of Paris, and the journey quickly descends into an escapade through hell as their past comes back for vengeance.

The foundation for this film is great; the characters are introduced well and the pacing of the action adds a lot of dramatic tension that lures the audience into the movie. “As Above, So Below” is a film that would have been great, but director John Erick Dowdle opted for a predictable found-footage film that places emphasis on a headache-inducing shaky camera and jump-cut editing to milk every scare out of the audience possible.

The movie does create an atmosphere thick with intrigue and mystery. The catacombs provide the perfect backdrop for some claustrophobic terror. Surprisingly, some of the best experiences to be had with the movie are not the scariest. Taking a page from films like “The Da Vinci Code,” and “Indiana Jones,” there are puzzles the crew has to solve in order to move deeper through the catacombs. The theater was buzzing with people murmuring to friends and family trying to decipher the mysteries of the crypt. It was thoroughly enjoyable to see the cleverness of Scarlett, and her partner George (Ben Feldman) as they interpreted conclusions from symbols through personal experience and bits from commonly understood history.

As the movie’s heroine, Scarlett really makes this film enjoyable to watch. She is a mix between the cunning of Indiana Jones and the brave, adventurous spirit of Lara Croft from “Tomb Raider.” Her impulsive character drives the movie forward, and she is still quite relatable. However, the flaw with spectacular main characters is that they often pull away from all the others in the film. Everyone else seemed like dead weight, or lambs that were dragged along simply to be slaughtered.

A good horror film builds tension slowly, always prepping the viewer for a scare to happen at any moment, then hitting them right when they least expect it. The tight corridors, and the fear of hell-wrought mutilation make for some great anticipation, but the delivery is lackluster at best, and unintentionally hilarious at worst.

Still, “As Above, So Below” is a fun movie that is worth at least a watch, and there are plenty of elements that viewers can relate to. But the style of this found-footage film really hinders a genuinely intriguing and intensely creepy premise.