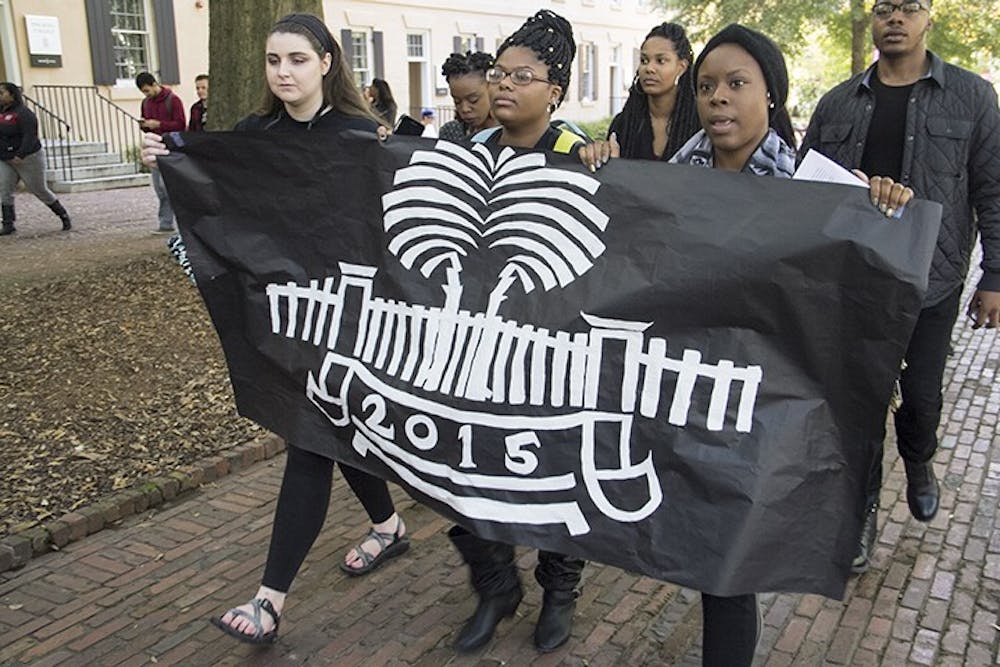 By Patrick Ingraham, and Ben Crawford

Student group USC 2020 Vision held a campus-wide walkout in November to protest university inaction on a variety of social issues, producing a list of 12 demands directed at university officials.

The demands and logistics of the walkout were shared in a Google Doc. The walkout began at 11 a.m., followed by a march through the Horseshoe from Longstreet Theatre to the Osborne Administration Building at 11:30 a.m. The participants were encouraged to wear black

Under the slogan "Here's no place like home," their demands range from a public recognition of the university's history with slavery to provisions for gender-neutral housing and bathrooms.

"The demands that follow are not new," the group wrote in an open letter to USC President Harris Pastides, "These demands are a reflection of our collective experiences attending this university and our discontent with the university’s dialogue-only initiatives. Despite our efforts to spur committee action, provide our own programming, and advocate for our needs, we have seen few substantial changes in university policy or practices. Therefore, we have yet again taken it upon ourselves to enact change at our university."

Correction: Attached are @USC2020Vision's list of demands in full: pic.twitter.com/JARlCZ1izU

University of South Carolina spokesman Wes Hickman praised the group's willingness to speak out, saying that many of the issues that they present are already being addressed.

"We appreciate our students making their voice heard, participating in civil discourse and continuing the dialogue toward making our campus a safe and welcoming environment to all students," he said. "The issues they have raised will do much to guide the conversation. In fact, many are already being addressed or are included in the university’s strategic plans."

Learning humanizes character and does not permit it to be cruel. #2020vision

Pastides announced several of these plans in an email sent to the student body, which include an initiative called the South Carolina Collaborative on Race and Reconciliation run by Chief Diversity Officer John Dozier, which intends to "host further dialogue and conversation" on related issues.

"We remain steadfastly committed to improving our institution for the benefit of all members of the Carolina family," Hickman said. "The leadership and opinions of these students is welcome and much appreciated. We look forward to addressing these as we move forward in creating a safe, welcoming and comfortable environment in which all Gamecocks can thrive."

The group is protesting after issues of race and general inclusiveness were raised by several student organizations on campuses across the country. It follows University of Missouri protests that saw two school officials resign, including university president Tim Wolfe.

While USC 2020 Vision does not call for the resignation of Pastides, it does call for "a transparent and independent investigation" into several university administrators — including Bobby Gist, Executive Assistant to the President for Equal Opportunity Programs, Dennis Pruitt, the Vice President for Student Affairs and Jerry Brewer, Associate Vice President for Student Affairs and Academic Support. The demands do not outline why these administrators were chosen in particular, nor what the goal of such an investigation would be.

While USC 2020 Vision recognized the comparison of their actions with the events at Missouri, the group rejected it wholeheartedly, emphasizing that the situation at USC was unique.

"We have heard our university question, 'Could this be Mizzou?' over the past week," the organization said in a press release. "The answer is no. We stand with Mizzou, but our needs are different. Some of our demands need no additional explanation. Others do. While we recognize the existence of racial tensions on our campus, it would be irresponsible to ignore the lived struggles of all minority groups. With this list, we stand together."