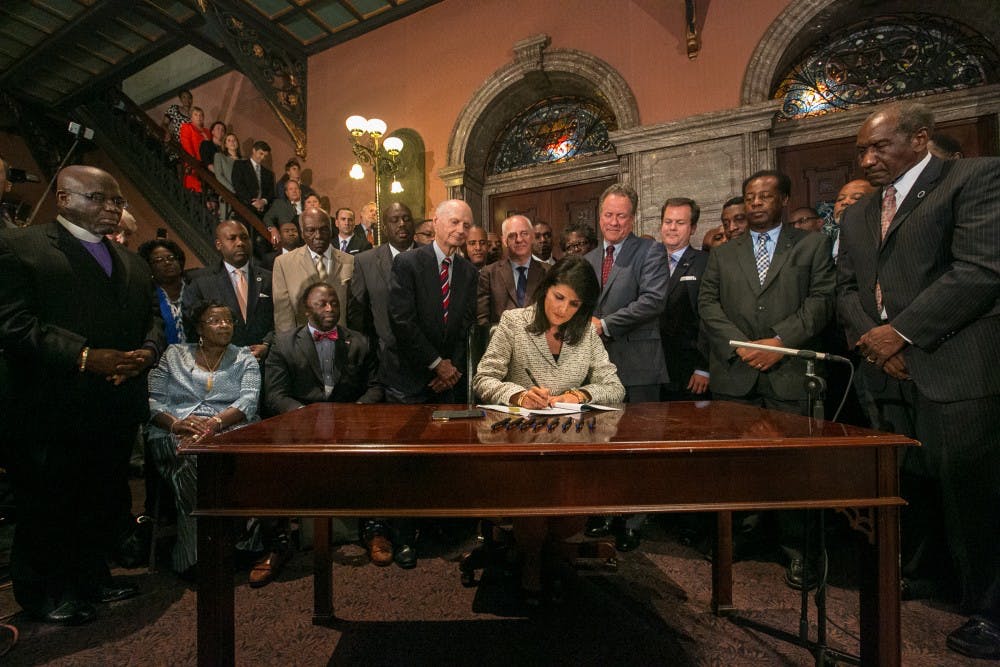 Her warm up act? President Obama.

Haley has been chosen by congressional Republican leaders to deliver the opposition response to the State of the Union address. A tradition dating back to the 1960s, the nationally televised speech following the president’s is seen as a huge opportunity for politicians to grab the spotlight.

Three presidents got the chance to give the rebuttal before they stepped behind the podium for the main event. Recent stars include presidential contender Marco Rubio and former vice presidential nominee Paul Ryan, both of whom used the speech to advance their political careers.

But it’s a high stakes gamble. While Rubio gained significant exposure from the speech, he has been mocked relentlessly  ever since for his awkward delivery which included lunging for a water bottle without breaking eye contact with the camera. And Louisiana governor Bobby Jindal saw his rising political star come crashing down after a widely panned response to Obama’s first congressional address.

Haley clearly sees this as a chance to increase the buzz about her possible inclusion on this year’s Republican ticket. After a year that saw her win praise for her response to the Charleston shootings, her role in the removal of the Confederate flag at the State House and her leadership during the catastrophic flooding, Haley is at the top of the list for possible vice presidential nominees in 2016.

I’ve previously been critical of Haley’s vice presidential aspirations, noting that Haley has a mixed record on racial issues despite touting herself as a leader and example in that area. But for all the talk that myself and others have done about her increasing national profile, this is where the rubber meets the road. Flame out during the speech, and she can kiss any nomination this year goodbye.

As for the impact on the state and on USC, Haley’s rise in stature is a mixed bag.

After John McCain was smeared with vicious rumors in South Carolina in 2000, Strom Thurmond was tainted posthumously by scandal, Alvin Greene stumbled his way through his Senate campaign in 2010 and Lindsey Graham took a baseball bat to his cell phone last year, South Carolina is due for a win in the political reputation department. Haley could deliver a much-needed boost to the state’s image, as she argues she already has. But Haley’s past in the rough and tumble world of South Carolina government leaves the possibility for an explosive scandal to emerge midway through a general election campaign.

As far as USC goes, Haley has not made higher education funding a public priority during her administration, and who can forget when she threw the school’s most generous donor, Darla Moore, off the board of trustees and replaced her with a campaign donor. Plus, she’s a Clemson grad — so there’s that.

The bottom line is it’s make-or-break time for Nikki Haley’s national ambitions on Tuesday night, and I think the best piece of advice for her came from Marco Rubio. He told her to drink water before she goes on the air.