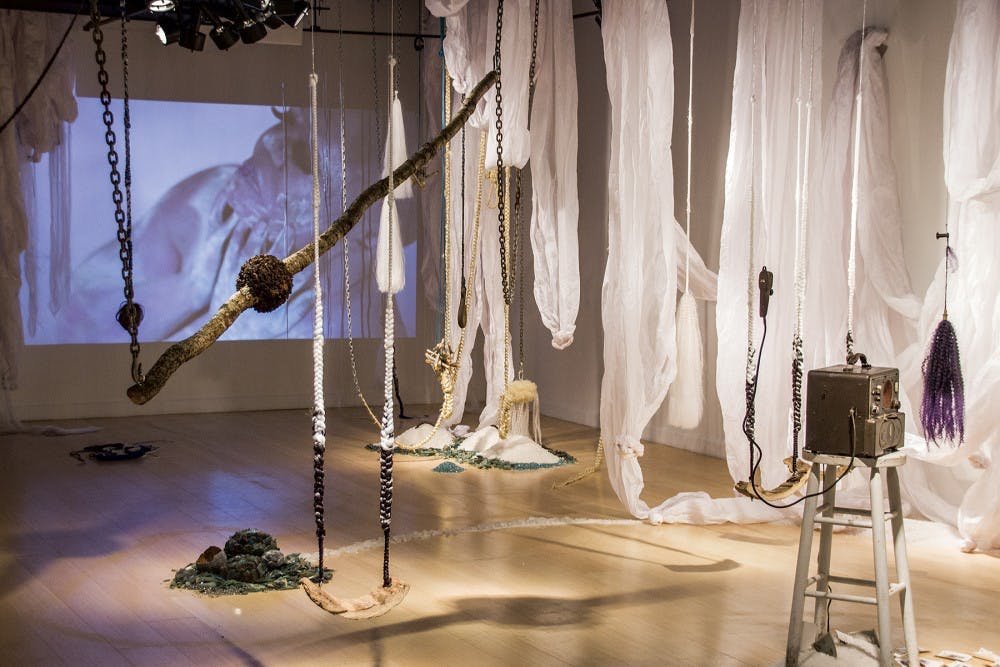 Shimmering white sheets and deep royal blue tassels drape from wall to ceiling; shards of turquoise glass and piles of glistening salt are grouped across the floor. As viewers wander through the “The Space Between,” they duck under suspended tree branches and weave through dangling ropes and metal chains.

Michaela Pilar Brown’s exhibit is located in the McMaster Gallery and runs from Jan. 4 to Feb. 5. "The Space Between" focuses on the effect that psychological trauma has on muscle memory and physical being. The idea has its roots traced back to the trans-Atlantic slave trade, the time of exploitation and enslavement of Africans to be sold in North America and European countries. While not explicitly visible when just wandering throughout the sculpture exhibit, the main theme of the work is a personal exploration on the trauma and oppression placed on black women throughout time.

On Jan. 21, the exhibit’s reception featured Brown’s live performance of “Mother Wound.” The performance consisted of videos and images projected on the walls while Brown placed markings on her body to represent the physical and psychological wounds her mother faced. These wounds serve as a metaphor for the mental and physical oppression that plagues black women in America.

Brown studied art history and sculpture at Howard University in Washington, D.C., but she has recently had many exhibits in Columbia and across South Carolina. “Where They Cut Her I Bleed” is showing at the Tapp’s Arts Center through Jan. 30.

“I explore the ritualized use of common objects, and architectural spaces, often queering their size, orientation or form to blur the line between memory, dream, and experience,”  Brown said in her official artist's statement. “I use racially identified signifiers to twist and turn mythologies about the body and the spaces that it occupies.”