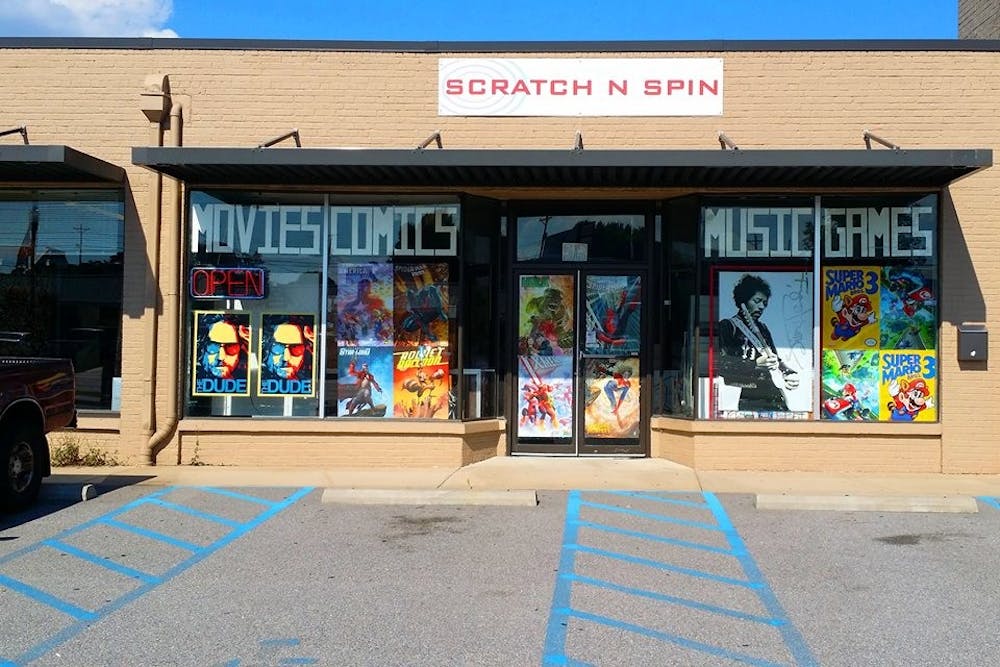 Deals: 10 percent off every comics purchase, subscription service that offers bigger discounts for subscriptions to six or more titles, permanent sales on CDs

Last time in our Comic Shop Spotlight series, we focused on the oldest comic shop in Columbia, Silver City Comics. In contrast, for this entry we'll travel farther into West Columbia to a more recent and different kind of comic book store.

Scratch N' Spin, true to its name, started as a DJ specialty store in 2003 before expanding to include movies and vintage video games. In 2010, after Acme Comics went out of business, store owner Eric Woodard  decided to buy most of their stock. Initially mainly consisting of back issues, Scratch N' Spin became an all-in-one media shop. Subsequently, Woodard created a Diamond account (a comics distributor) and started carrying new monthly series.

Entering the store, it’s hard not to be paralyzed with how much is contained within the walls of Scratch N' Spin. Action figures are hung on any available space on the walls, multiple comic shelves with new issues are to the right, DVDs and vintage video games line the opposite wall and the back half of the shop is exclusively CDs and vinyls of all ages. It is a multi-media paradise in every direction.

Every time I have been to Scratch N' Spin, Woodard has been genuine and eager to help. The day I came to interview him about his experiences, however, the store happened to be particularly busy. Thankfully he pointed me to Allen Mauldin, the comics manager for Scratch N' Spin. Mauldin was kind enough to share a little about his experiences running the comic section of the store.

“It’s always an ever-changing game," Mauldin said. "It kind of keeps you on your toes because you always have to be aware of what is selling and what isn’t so that you can keep up with the business.”

He also noted the unfortunate “polarized comics community” that has emerged as a result of comics becoming increasingly political in just the last few years. While some fans have clearly enjoyed the socially relevant stories that have emerged, some are left still trying to find an escape from real world madness.

“There’s been a shift in what [comic publishers/creators] are trying to do as opposed to what people want," he said. "It seems like a lot of time they’re focused on social issues and, while that’s good, they tend to overtake the book instead of letting the character develop.”

With such a variety of products available, Mauldin pointed out that he notices many customers who come in methodically for the same items every time. As many would guess, Wednesday, which is known as “New Comic Book Day” to fans, always yields the comic book regulars, while other days in the week are slower for that section.

Scratch N' Spin has dug out its very own corner into the comic book market in Columbia. A wide array of entertainment options are available at the shop, so head on over even if you are not looking for comics in particular. Whether looking for an antique record or picking up your monthly subscription, you are bound to meet many different people.

Join us next time as we spotlight another comic shop in Columbia, and be sure to check out Scratch N' Spin’s Facebook here.