Opinion: USC should be cautious about incident response 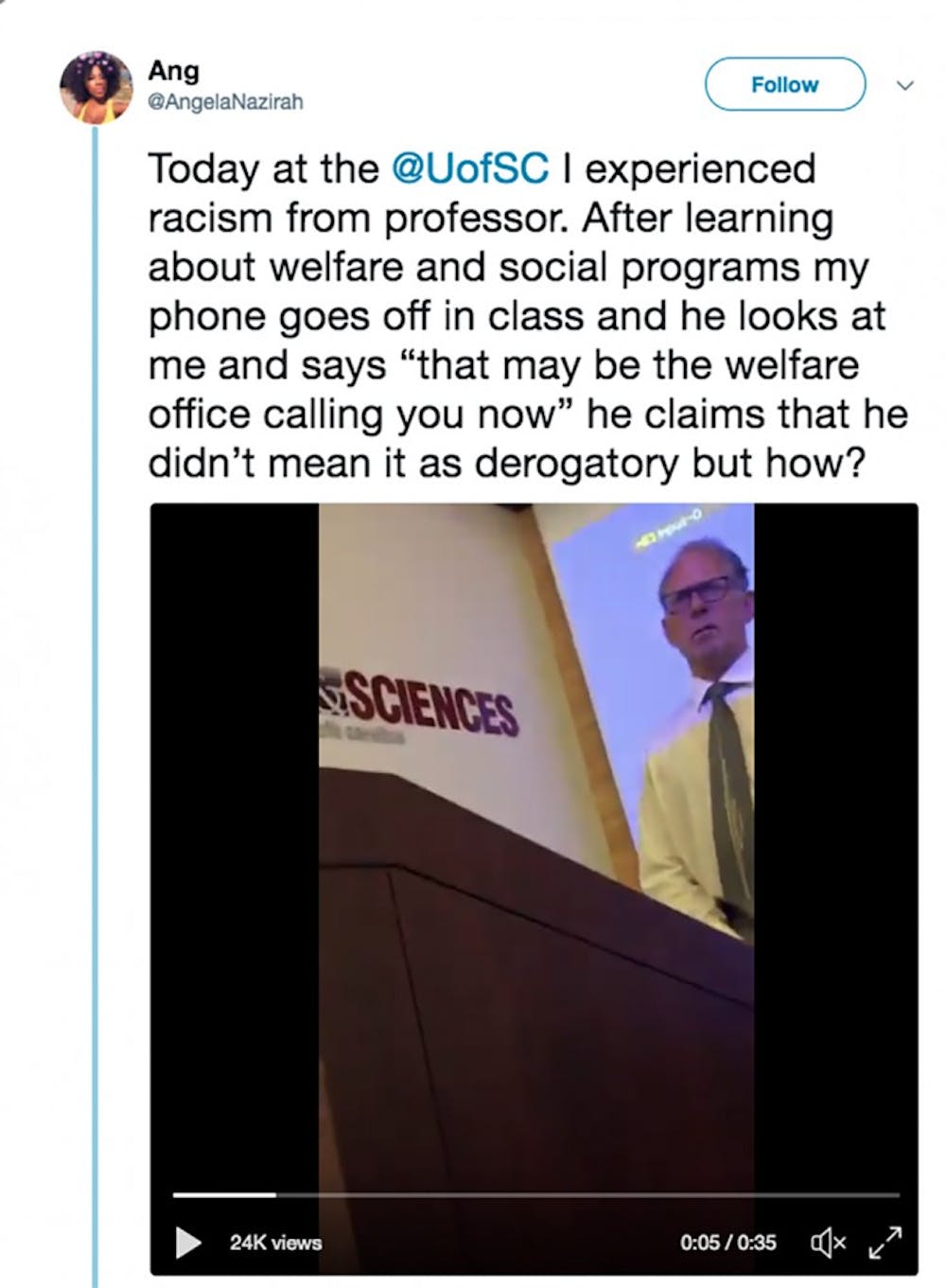 Several weeks ago, Angela Bogni, a third-year biology student here at USC, tweeted that a professor in the political science department had made a derogatory comment towards her in class. Bogni had received a phone call in the middle of a lecture and she claims that the professor said, “that may be the welfare office calling you now.”  Bogni, who is black, believes that the professor was referencing an earlier portion of the lecture about minorities disproportionately receiving government benefits. In a video the Bogni posted, the professor claims that that wasn’t how he intended the joke and that it was just an unfortunate coincidence.

Whether or not the professor meant to single Bogni out because of her race is unclear. Regardless, it was embarrassing to her for obvious reasons. Within hours of tweeting her story, President Pastides replied, apologizing for the event and emphasizing that racial stereotyping is “not representative of @UofSC.” While it is a nice sentiment, I believe that Pastides’ quick interjection into this situation sets a bad precedent and raises some questions.  Is it right for the university administration to be so hasty to throw a professor under the bus? Is it responsible to make a judgement without waiting to hear all of the facts? I don’t think so.

The aftermath of the Harvey Weinstein sexual assault allegations has opened the floodgate for hundreds of men and women — now united under the #MeToo banner — to come forward and publicly share their experiences with sexual abuse in Hollywood. It is wonderful that they can now speak freely — it is a change that needed to happen. However, the movement is not without its side effects. A new social protocol has been created; companies that are associated with actors, directors or producers accused of sexual assault are quick to cut all ties with little due process. While most of the time this seems justified given a preponderance of evidence,  there is a potential with this protocol for companies to jump the gun just to appease the public.

This brings us back to USC. Was Pastides giving a measured statement based on evidence or making a snap judgement to save face? Given that only a few hours worth of consideration was taken before responding, it is probably the latter. For something as serious as sexual assault, where the perpetrator could be an immediate danger to others, acting quickly might be the best option. This situation, however, had considerably lower stakes — nobody was physically endangered by this professor's comments. Additionally, there is a (more) clear definition for sexual assault that can be considered; there isn’t one for jokes and offhand comments. We are all tired of hearing perpetrators of sexual assault claiming they made a “mistake,” because it is obvious that their action was deliberate and malicious. For a joke, however, the line is more blurred; someone really can make an honest mistake.

Don’t misunderstand me and think I’m saying that Bogni shouldn’t have said anything. I think what she did was necessary and brave. What I am saying is that the university should be more restrained when making a statement that could potentially cost a professor his career, especially on an issue as subjective as a joke. If it is true that the professor was making a racist comment and has a history of doing so, then he deserves to be fired. But take the time to hear the testimonies and evidence first before throwing the situation into the court of public opinion.