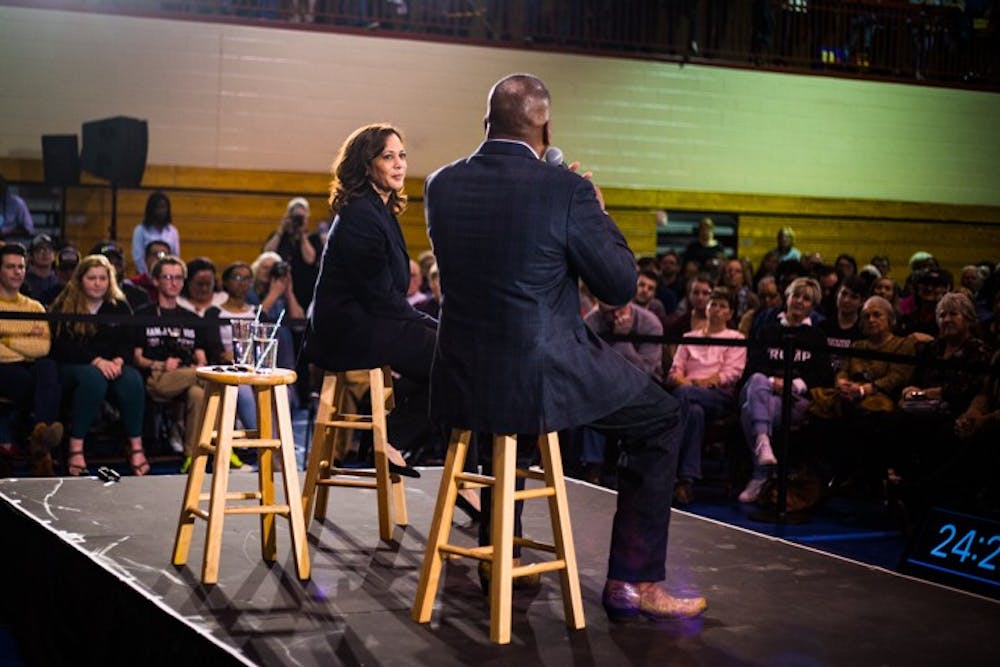 By Maria Jutton, and Rita Naidu

Criminal justice reform, universal health care and immigration are just some of the issues that students had in mind as they attended Sen. Kamala Harris' town hall event on Saturday ahead of the 2020 election season.

Harris, who announced her candidacy for U.S. president last month, gave voters the chance to hear her stance on popular issues at the Brookland Health and Wellness Center in West Columbia. Approximately 1,000 people attended, including several students from USC and nearby universities.

After a brief introduction from Columbia Mayor Stephen Benjamin, Harris spoke for about 15 minutes, highlighting the issues of teachers' salaries, affordable health care and student loans, all of which are affecting the working middle class.

“We need leadership to recognize the disparities, the institutional issues, the systemic issues that have resulted in inequities in that system,” Harris said. “We need massive reform and change.”

Maddie Petkewich, a first-year political science student at University of Notre Dame, has been directly affected by the laws Harris has helped to pass as a legislator, and said she is excited about Harris’ campaign.

“I was actually internationally adopted and I wouldn’t have been able to do that without some of the laws that were advocated by the senators from Sen. Kamala Harris’s state,” Petkewich said. “I’m very grateful for the work the state of California has done for that.”

Sawyer McDuffie, a first-year political science student, said climate change is an important issue for him heading into the 2020 presidential election. He appreciated Harris’ references to the Green New Deal and was impressed by Harris’ charisma.

“I feel like she definitely has the strength and the power to win the entire election,” McDuffie said. “She has a natural thing about her where you just know, you’re like, ‘OK, she’s the real deal, this isn’t fake.’”

There were also some students who would have liked Harris to be clearer about her policy plans and ideology, including Ryan Pickett, a third-year economics and international studies student.

“Seeing her right now, I don’t think I’m fully on board, ‘cause I don’t think people really want a typical politician, which is what I saw today,” Pickett said. “I want a candidate who really, really answers the question fully.”

“I’d like to hear her address issues about the horrificness of the crimes going on at the border,” Jones said. “Will we get Pell Grants translated for incarcerated people? I know she believes in a livable minimum wage, but will that apply to incarcerated people as well?”

Harris briefly addressed immigration reform, climate change and public education before taking questions from members of the audience. One attendee asked Harris what sets her apart from other candidates running for office.