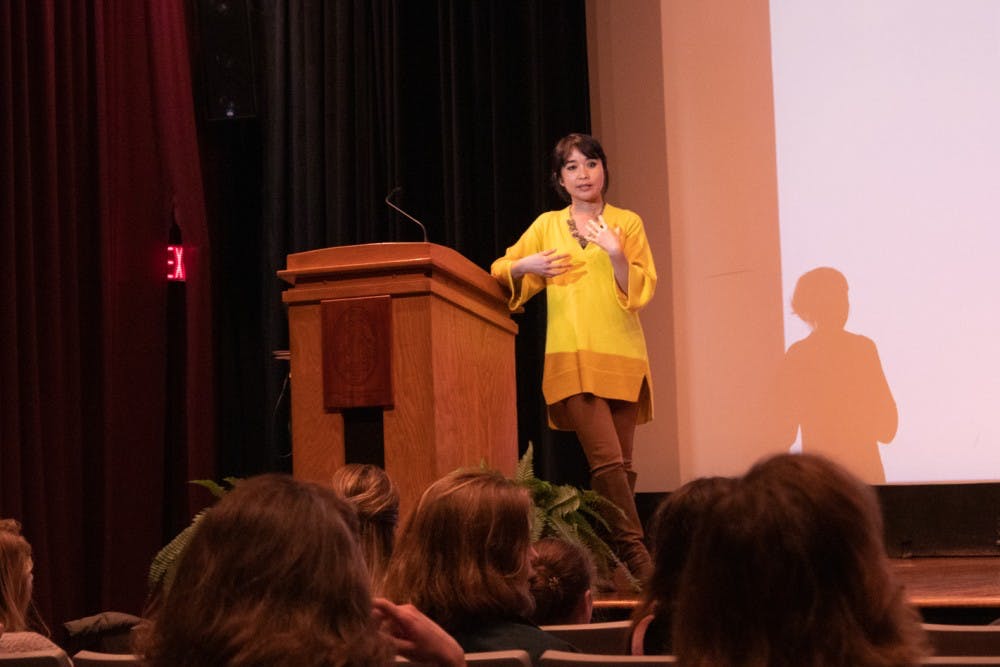 Award-winning novelist reflects on experiences as a Vietnam War refugee

Award-winning novelist Thi Bui’s talk, "The Best We Could Do: The Search for Freedom and Home Across Borders," depicts her and her family’s personal struggle as Vietnamese refugees.

Bui became a refugee at 2 years old after the end of the Vietnam War in the 1970s. Now, Bui is an American citizen and a mother. In addition to working as a freelance graphic novelist, Bui also serves as a faculty member of the California College Master of Fine Arts Comics Faculty and a founding teacher of the Oakland International High School.

Bui's lecture was based on a graphic memoir that she wrote called "The Best We Could Do," based on her experiences as a refugee of the Vietnam War. Samantha Cheeseright, a first-year media arts and film and media studies student, feels that the way that Bui depicts her story through art changes her perspective on the refugee story.

“She kinda lays it out, how she saw it, which was totally different than how someone like me, who’s not a refugee, would see it,” Cheeseright said.

In her talk, Bui got members of the audience to portray characters in a particular scene from her novel. She also portrayed her experiences on her return journeys to Vietnam and her emotional 10-year process of writing her novel.

“For me, because I had left it when I was so little, it was a chance to have my own impressions, for the first time, about this country that I’ve been raised to see as a home that was no longer there,” Bui said.

Ashlyn Howard, a first-year political science student, felt inspired by Bui's talk to change the way Americans see refugees and their plight as she enters the field of politics.

“Hearing her touch on facts of things that I haven’t even heard about, that the news doesn’t even touch on, it just really opened my eyes on how much help they do need and how much [refugees] get ignored, and that is not right," Howard said.

Bui also described how she approaches individuals who do not necessarily empathize with the refugee plight she portrays in her novel.

“I don't ever want to come into a situation bashing them over the head with how to think. I find it much more satisfying for me to just ask questions and try to understand the story of how people arrived at their opinions,” Bui said.

David Snyder, a clinical associate professor of history and global studies, has served as the faculty principle of Maxcy for five years. Snyder feels that a key part of Maxcy’s mission includes the need to bring an international voice to USC’s campus and Columbia.

“They’re not always international themselves. They sometimes are, but they always have an international voice. Their work, their calling, their career has an international dimension to it. So we bring them in and in so doing, try to bring a little bit of the world to Maxcy College,” Snyder said.

Snyder plays an active role in choosing resident fellows to bring to campus through consulting with staff, colleagues around campus and plugging in to other trends on campus. Snyder described the type of individuals Maxcy strives to invite.

“We found some folks at a reasonable, honorarium level just before they take off and hit the big time. So, Thi is just on that cusp of real national and even international recognition,” Snyder said.

Maxcy’s initiatives also try to connect with other programs and groups on campus. Currently, Vietnam is considered a place of strategic partnership with USC, according to Global Carolina, which develops USC initiatives to increase students’ interactions with the global community and promote diversity. This contributed to the Vietnamese theme behind this year’s visiting fellow program.

“You can’t think about the future of Vietnam and of American relations with Vietnam without acknowledging the past — we call it the Vietnam War; it’s really the American War in Vietnam,” Snyder said.