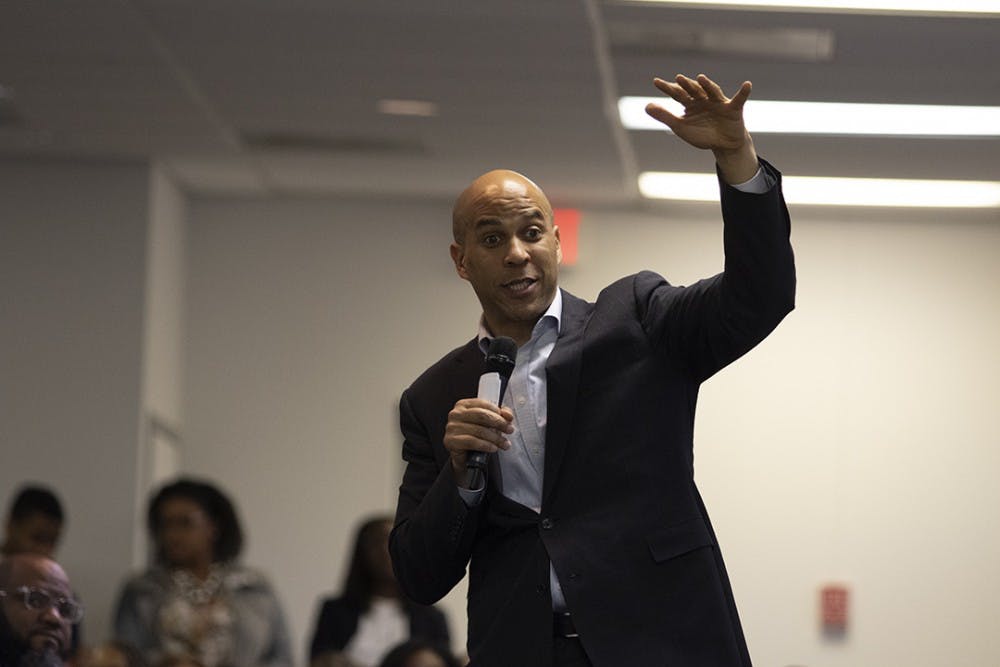 The New Jersey Democrat and 2020 presidential candidate told personal stories, spoke about his platform and participated in a panel discussion and Q&A with the audience on Saturday, March 23.

Booker announced his presidential campaign on Feb. 1, and Saturday's event in the Cecil Tillis Center was co-hosted by local organizations: Working Hero of South Carolina, which aims to provide people in poverty with financial security, the Talented Tenth, which aims to provide young African-American professionals with resources and service opportunities, and the South Carolina Democratic Party Black Women's Caucus.

One panelist asked about student loan debt and told Booker it has impacted her and others, causing them to change their paths due to the large amounts of money owed after completing their education. Booker responded saying student loan debt is a national crisis because students and the younger generation control the future of the U.S.

“In a global knowledge-based society, the most valuable natural resource a country has is the genius of its children,” Booker said.

Booker also said he wants to turn the federal student loan program into a student loan debt forgiveness program for all students, but to specifically accelerate it for careers in teaching.

Booker also said he wants to implement a program called Baby Bonds, which will give every child born in the U.S. a savings account worth $1,000. The child would then receive an annual deposit based on the income of his or her family. Children born in lower-income families would receive more funds, and those born in higher-income families earning would receive less.

Children could earn up to $2,000 per year until the age of 18, Booker said, and they would be allowed to use this account to purchase a home, pay for college, enter a training program or start their own business.

“It would make every American suddenly have wealth in this country and more of a stake in our economy without living paycheck to paycheck," Booker said.

Booker said he would accomplish this by bringing back the estate tax, which was in effect under Obama, and by ending corporate tax loopholes.

Royce Mann, a high school student, said he enjoyed the panel discussion and Q&A because it showed that Booker was listening to local activists and the community. As a prospective college student, Mann said he was intrigued by the Baby Bonds proposal and the student loan forgiveness programs. Mann said he finds these plans feasible, because if the U.S. military budget is nearly $600 billion, the government can also allocate funds to student loan forgiveness plans.

“Because you have so many people who are based on circumstances out of their control when they're born, [they] don't get the same opportunity," Mann said. "I think especially investing in young people and ensuring that everybody at least has that equal opportunity is really important.”

Lyric Swinton, a third-year sports and entertainment student, said that addressing rising college tuition, funding for Planned Parenthood and police reform are among the top issues for the 2020 presidential race. She said that she would like to think Booker's bonds proposal is feasible; however, she has her doubts about the program.

“Giving every baby $1,000 — that sounds like a lot," Swinton said. "But, it also sounds like he’s thought of a lot of great ways to be able to pay for this.”

Affirmative action in college admissions is another issue that Swinton said is very important to her. Swinton said this is an issue Booker should focus on, and USC is an example of a lack of equal representation.

“Race is very important when it comes to college admissions. You have institutions such as the University of South Carolina where we don’t have as many students of color as we should,” Swinton said.

Marcus Scoppola, a second-year political science student at Clemson University, said he wants to work with Booker in the future. He said that Booker's upbringing in Newark, New Jersey has equipped him with the knowledge of how to positively impact lower-class families and struggling college students.

“He has a sense of what economics is like in a poor setting, and when you look at the crippling debt student loans offer, he’s going to know how to combat that," Scoppola said.