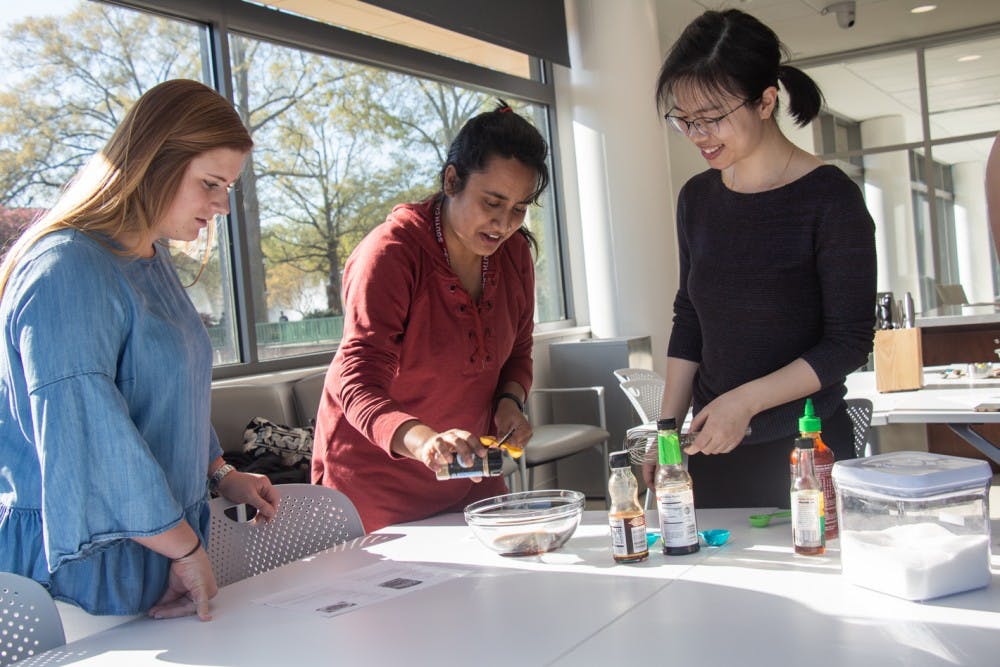 Students and faculty learned how to make healthier alternatives to their favorite takeout foods with the “Make Your Own Takeout” cooking class.

Lindsay Shazly, an outreach dietitian for USC who hosted the cooking class on Wednesday, can be found promoting healthy lifestyles at the farmers' market, Healthy Carolina events and through presentations at USC. She says she aims to pick recipes that are fun and relevant to students on a college campus.

“Everybody leads a really busy lifestyle, and we are always grabbing takeout — which, there’s definitely a place for that — but we wanted to show students that they could also do these dishes at home, and that they could make them a little bit healthier,” Shazly said.

On the menu for this particular cooking class, which was held in the demonstration kitchen in the Center for Health and Well-Being, were some popular "grab-and-go" items: lo mein, pizza and milkshakes. Sujata Aryal, a first-year health information technology master's degree student, feels that the cooking style that these recipes require differed from her own.

“We get to learn these interesting things that as South Asian, or someone who cooks, all this is very new,” Aryal said.

Robin James, a second-year mechanical engineering Ph.D candidate, described the recipe used to make the pizza in a way that was new to him.

“I didn’t actually know how to make a pizza using the ingredients that were mentioned, like Greek yogurt and the dough that self-rises. I felt that that recipe was very unique,” James said.

Shazly often adds little tips and tricks she's learned in her own cooking experiences. One of these tricks includes throwing a noodle on the wall to see if it's done cooking — if it sticks, it's done. Another is using a unique method to wash mushrooms.

“To clean mushrooms, I usually wet a towel and wipe the dirt off because some people say that if you wash them, then the water will absorb and they'll become waterlogged and they won’t taste as good,” Shazly said.

Sowmya Raghu, an adjunct professor in the mechanical engineering department, commented on how convenient these recipes will be for her.

“I teach an 8:30 [a.m.] class, so I bring out food from home. I think this is a 20-minute recipe which I can make beforehand and then I can just bring it out early in the morning," Raghu said. She also said that the cooking class will help save her time and energy in the future.

Shazly expressed that often times, takeout meals don't provide all the required nutrients needed as opposed to cooking at home.

“It's recommended that we have two and a half to three cups of fruits and vegetables a day. So a lot of times in takeout, vegetables are just an accessory,” Shazly said.

When asked for some general advice on pursuing a healthier diet, Shazly suggesting planning ahead when it comes to preparing meals and making sure to consume a variety of food groups. Shazly also touched on the importance of balance in a daily diet.

"Again, there's definitely a place for takeout, but try to limit foods like that to one or two times a week," Shazly said. "We really want to look at the big picture of our overall diet and make sure that overall, we have a healthy eating pattern."