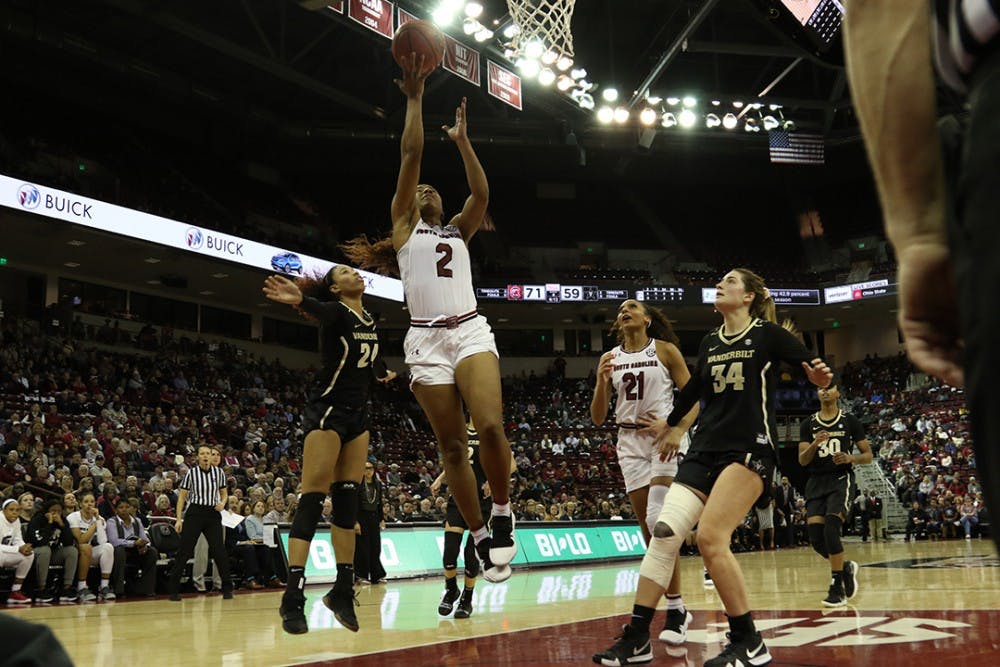 Women’s basketball falls in conference, looks ahead to postseason

For the first time since 2014, the South Carolina women’s basketball team will enter the NCAA tournament with a conference tournament loss.

The Gamecocks lost to the Arkansas Razorbacks 95-89 on March 10 at Bon Secours Wellness Arena in Greenville, which was the first SEC Tournament loss since 2014 when South Carolina lost to Kentucky 68-58.

With the loss behind them the Gamecocks look to begin their postseason march towards another national championship.

“This loss doesn’t really define us. Gladly, this isn’t the end of our season,” junior guard Te’a Cooper told The State. “We got ourselves to the position to where we still have the opportunity to play in the NCAA tournament, and we gotta get ready for that and use this as motivation.”

South Carolina now has a 21-9 (13-3 SEC) record, qualifying them for the NCAA tournament, which begins play on March 22.

Where the Gamecocks will begin postseason play has not yet been announced. However, experts believe they'll be playing close to home.

ESPN bracketologist Charlie Creme has South Carolina as a No. 4 seed in the tournament playing the winner of Bucknell vs. Patriot, both projected to be No. 13 seeds, in Charlotte.

Should the Gamecocks win two games at their makeshift host site on the UNC-Charlotte campus, they're projected to be in the Greensboro regional along with other notable teams such as No. 1 Baylor and No. 6 Kentucky. Both the Baylor Bears and the Kentucky Wildcats beat the Gamecocks at home this year by scores of 94-69 and 65-57, respectively.

SB Nation writer Russell Steinberg initially projected the Gamecocks as a No. 3 seed, but moved them down to a No. 4 seed after their loss, according to his Twitter page. Unlike Creme, Steinberg did not provide a projection as to where the Gamecocks will begin the postseason.

Even with fans and media speculating about where the Gamecocks will land, head coach Dawn Staley said she isn't concerned.

“I’m not even gonna comment on that,” Staley told The State. "It’s in the committee’s hands, and they will decide what that looks like for us, like they do every year.”

South Carolina will officially learn their postseason destination on Monday at 7 p.m., when the women’s tournament bracket is released on ESPN.