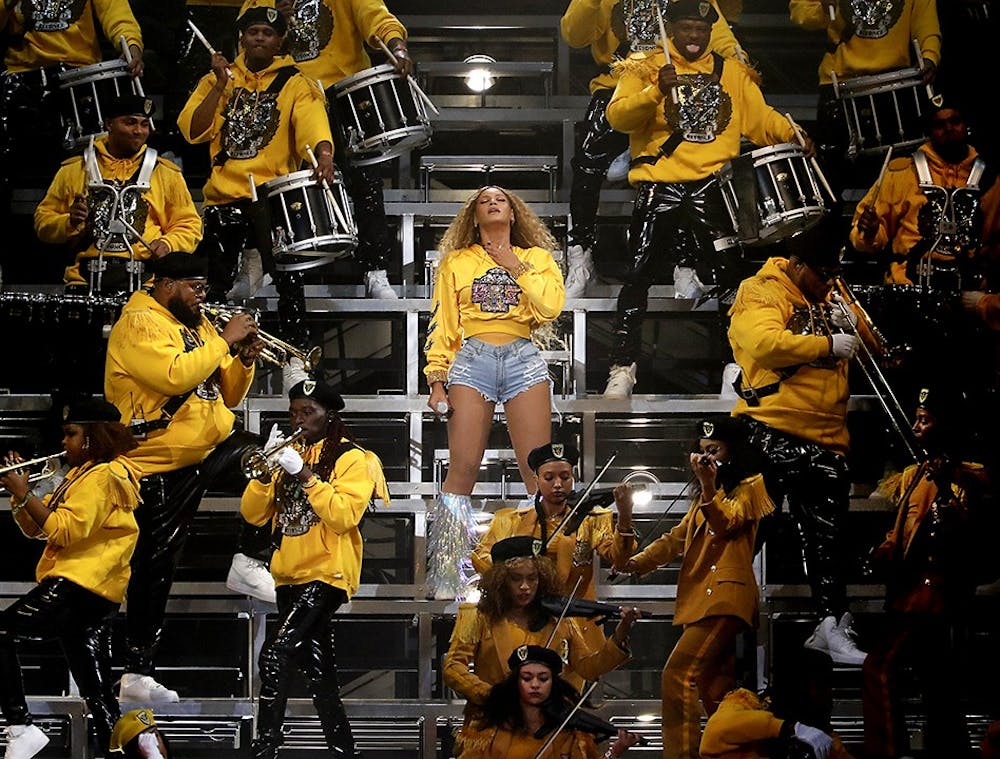 One year ago today, I, and approximately 458,000 others, stayed up past our bedtimes to simultaneously stream Beyoncé’s Coachella performance on YouTube.

Although the stage was thousands of miles away in a California desert, the excitement from the eager crowd was contagious. I felt like I was there, as I sat in my dorm room at 2 a.m. swaddled in a blanket with my eyes glued to my laptop, internally praying for USC's faulty Wi-Fi to work for just one night.

There was a lot leading up this moment, so let's start at the beginning.

When Beyoncé was first announced as Coachella's 2017 headliner, she was set to become the first black woman to ever headline the festival.

However, there would be a slight change of plans. Later that year, Beyoncé unexpectedly postponed her show due to doctor's orders — she was pregnant with her twins, Sir and Rumi.

Thus, the show was pushed back a year, and Lady Gaga stepped in as her replacement. Still, the hype behind Beyoncé's show never wavered.

Prior to the day of the show, little was known, but we knew the stakes were high after Beyoncé pinned a personal note to the BeyHive on Facebook.

"I am so excited to see the BeyHive tonight at Coachella. We have been working hard and have a special show planned for you so please be safe and stay hydrated. We need your energy! There will be an hour intermission before my performance, so mark your spot, charge your phones, grab your drinks. Can't wait to see y'all at 11:05pm!" she said in the Facebook post.

While many were expecting the typical flower crown romp Coachella is known for, the BeyHive knew better. Even though I was on the opposite side of the country, I knew I was preparing to witness history.

Dubbed "Beychella," Beyoncé's performance was an ode to historically black colleges and universities (HBCUs). It was a celebration of love, talent and most importantly black history.

For the singer, she said her years in the girl group Destiny’s Child served as her schooling, and her stage was her teacher. As a result, she created the homecoming she never got to experience. What we got was a much-needed history lesson in black culture directly from the source.

Throughout the show, HBCU traditions such as stepping were incorporated and paired with an all-black band, orchestra and dancers.

Staples like “Crazy in Love” and “Diva” were given a new breath of life as they were rearranged and resuscitated with blaring horns, interpolated with Texas hip-hop flair and New Orleans bounce.

In between her sets, the moving words of great black thinkers and artists like Malcolm X, Maya Angelou and Nina Simone were included as interludes, reminding us where we came from, and how far we've come.

Through her performance, she stressed the importance of preserving the black experience, which is important now more than ever.

For instance, just this past week, one man said he wanted Howard University to move so he could have a space for his dog to poop.

Luckily for us, the show was immortalized in her new Netflix documentary and concert film, "Homecoming," and the 40-track "Homecoming: The Live Album."

The documentary was written, directed and executive-produced by Beyoncé and provides a behind-the-scenes look at Beychella from its conception to its end result.

Sometimes, it’s hard to believe that Beyoncé is human, but during the duration of "Homecoming" she bares it all.

In preparation for the show, she adhered to a strict diet and demanding workout regimen. She cut out bread, carbs, sugar, dairy, fish and alcohol, and she rehearsed new choreography for hours. On top of that, in between grueling rehearsals, she would stop to breastfeed the twins.

We see her struggle to get back into her groove and pick up the pieces to find herself again. Many times we see her as the teacher, but this time she became the student.

Nothing about Beyoncé's homecoming was accidental. Every choice Beyoncé made was purposeful, whether it be the intricate haircuts of the dancers or the samples included during her set. She stood proudly on the one of the world's biggest stages, yet made the most personal statement she could. What could’ve been an average setlist became an awe-inspiring study in African American culture.

It’s one thing to not care for her music, but to call her overrated just sounds like you're begging for attention at this point. To discredit her talent is to discredit her discipline. And let’s face it, other performers have been praised for doing one-tenth of what she does, there, I said it.

Yes, much to the annoyance of almost everyone, the Hive is very protective over its queen. If you utter anything about her that could even slightly be perceived as shade, your mentions and comments will be swarmed with bee emojis. Yes, her fans can go a little overboard at times, but there's a reason they feel this way.

For so many of us, she represents everything our mothers have taught us since childhood. We have to work twice, or in Beyoncé’s case, thrice as hard as our peers if we want to achieve just half of what they do.

I’m grateful to live in the era of Beyoncé, and you should be too.

More often than not, we praise our legends after they're gone when we should have done it when they were still here.

Our greatest living entertainer is alive and well, and we should give her flowers while she’s still here on this earth to smell them, because it’s clear she won’t be taking her foot off our necks anytime soon.