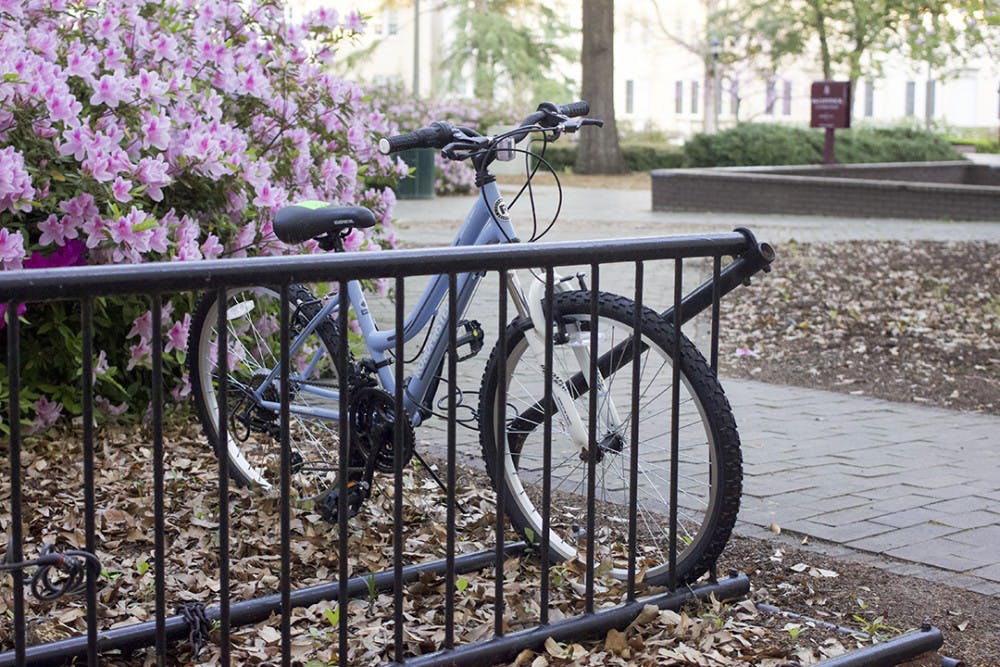 Cyclists at USC could soon have access to more bike racks on campus.

Second-year public health student Sophia Johnson took photographs of filled bike racks across campus and those in front of residence halls were especially crowded.She also took photos of bikes being locked to the handrails of Swearingen Engineering Center and Rutledge College because the racks were full.

There is an 8-to-100 ratio of bike racks to residence hall beds on campus. Johnson said her goal is to increase the 8 to 25.

Last semester, as the Residence Hall Association's chief officer of sustainability, she proposed that the university add more bike racks to campus and remove abandoned bikes from existing spaces.

Now, RHA is working with Parking and Transportation Services, the Facilities Department and Healthy Carolina to add more bike racks to USC's campus.

To help move this proposal along, Johnson is actively looking for volunteers to help tag and photograph abandoned bikes and areas in need of bike racks. One such area is Russell House, where installing another bike rack around the corner and near the patio would benefit students, Johnson said. RHA along with its volunteers, have assessed more than 90 bike racks on campus over the two rounds of bike rack assessments.

After abandoned bikes are identified, removed and refurbished, Johnson said she wants to donate the bikes to a charitable organization such as Families Helping Families.

“That would give students more of an opportunity to commute to their classrooms, to their residence halls, to their dining facilities and this would promote a healthier lifestyle," Johnson said.

Ian Wells, a first-year computer science student, bikes around campus and said he used to park his bike outside of Capstone House. However, someone stole his bike when he parked on the end of rack.

"Basically anyone with a wrench can go and undo two little nuts and bend back the piece of metal and get the bikes on the end," Wells said.

As a result, Wells decided to volunteer in the RHA project. He said he believes biking is a better way for students to get exercise between classes as opposed to taking a shuttle, driving or walking to classes.

“It takes up less space than those options, it's more environmentally friendly and it will encourage people to ride bikes more," Wells said.

Koby Padgett, communications manager for USC's Division of Administration and Finance, said the project will be a multi-step process if approved. They want to find spots that are both functional and aesthetically pleasing, she said. Blue Bike SC — a bike rental service — has done something similar with a rack near the Pendleton Street garage.

“From the university's perspective we’re trying to make campus more pedestrian and bike-friendly overall. So anything that we can do to promote that, that’s really the goal," Padgett said.

Another of Johnson's proposals is to create a biking lane on the streets near campus. However, Johnson said this has met some pushback from the city because it could interfere with parking spots located around campus.

Johnson also said USC being more than 200 years old carries its own infrastructure problems when attempting to increase bike-ability, but said she will continue to address the issues of bike lanes and bike paths.

Padgett said most roads around campus are owned by the City of Columbia, so any proposals to add a bike lane must go through to the city first.

Wells said he would like to see additional bike lanes added on streets around campus, especially at the intersection of Greene Street and Main Street. He said bike lanes would help cyclists, students and drivers because a lot of people don't know how to react to cyclists on the roads.

“I think a bike path there and other places around campus and the city would be tremendously helpful to anyone who rode a bike," Wells said.