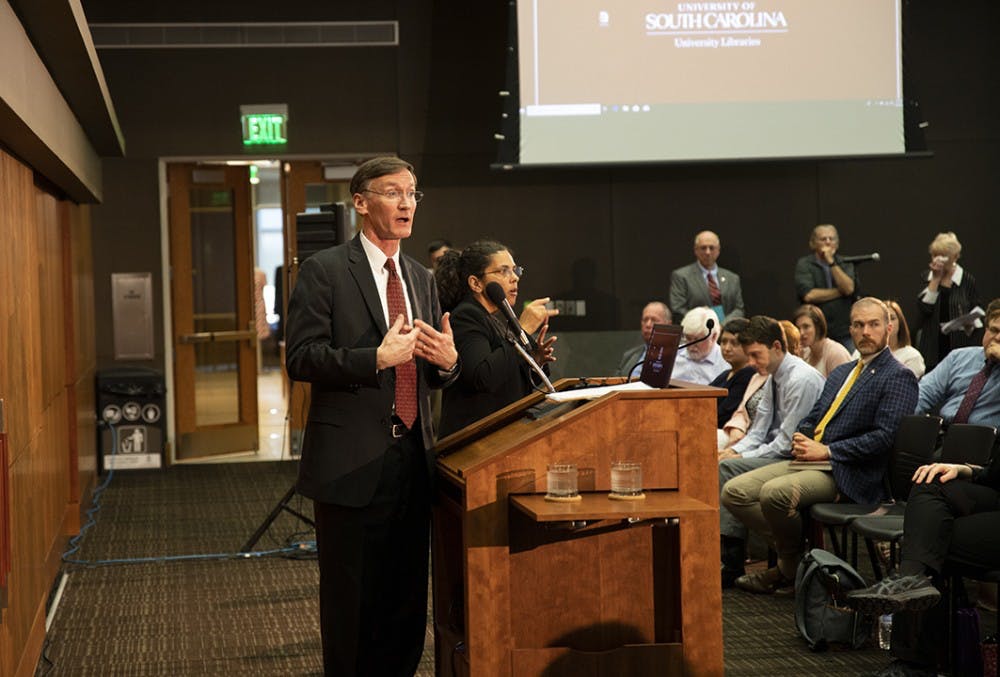 Joseph T. “Jay” Walsh spoke to faculty, staff and students on Monday about his vision for the university and answered questions from attendees about mental health, diversity, safety and research.

Walsh spoke at three forums throughout the day — one for faculty and staff, one for students and an open forum for the public.

At the faculty and staff forum, Walsh emphasized the importance of faculty being solely focused on teaching students and conducting research.

“This is the core of what a university does — teach and research,” Walsh said. “If you keep the focus on the core, then you can grow your institution.”

Walsh received his undergraduate and master's degrees in electrical engineering from Massachusetts Institute for Technology (MIT) and holds a medical degree from a Harvard and MIT joint program. Despite his focus on the science, technology, engineering and math (STEM) fields, Walsh said he hopes to promote interdisciplinary work and cooperation.

“I’m a STEM guy, but I brought in people from other fields because we’re a university,” Walsh said. “There’s a reason for that word — it covers a universe of things that we think are important to learn and study.”

Issues such as mental health, campus safety, Five Points and diversity were touched on during the student forum as students came up to the mic.

When asked what he would do to promote campus safety and continue President Harris Pastides’ “What’s My Name?” campaign, Walsh expressed his condolences following the death of Samantha Josephson, a USC student who was killed after getting into a car she thought was her Uber in Five Points.

Walsh said he does not want to take over Pastides’ personal campaign, but he does hope that the campaign and campus safety in general will improve.

“It would be wrong for me to stand here and opine deeply upon something that is already moving forward right now,” Walsh said. “I am more than happy to pick up where that is left, but you have a great president right now.”

While he does not personally represent a significant number of diverse perspectives, Walsh said, he hopes to establish a team around him that does represent alternative viewpoints. This is something he said he incorporated at Northwestern University and plans to do at USC if selected to be president.

“I, and nobody like me, could lead this institution without bringing in a team that is way more diverse than just me,” Walsh said.

Natalie Hicks, a fourth-year history and African American studies student, said she appreciated how Walsh talked about the importance of having a diverse staff to create a more inclusive environment.

“I liked the thought that he had given a lot of his answers,” Hicks said. “He was a bit long-winded, but I think that comes just from someone who’s really thought through why they want to do this and how their lived experience will apply at this university.”

During the Q&A, one student asked Walsh how he would approach making mental health a priority on campus while also bringing awareness to suicides on campus.

“I do feel that — to the extent possible — that institutions need to make this known, especially to those who are deeply affected by it, and that would be friends, fellow students,” Walsh said. “But that’s a challenge.”

Sophia Johnson, a second-year public health student, said she was hoping to hear more concrete solutions from Walsh when it came to mental health.

“When suicide was brought up he barely touched on mental health,” Johnson said. “He didn’t give specifics of how he could personally affect students’ lives positively. I would have liked to hear some ideas.”

As the chief officer of sustainability for Residence Hall Association, Johnson asked Walsh’s opinion on how he would work for sustainability on campus.

“I was glad to hear that he seems so open and willing to communicate with students, and he sees that as an important way to make an impact on campus,” Johnson said. “So if he is chosen,  I would definitely personally look forward to working with him in regards to sustainability.”