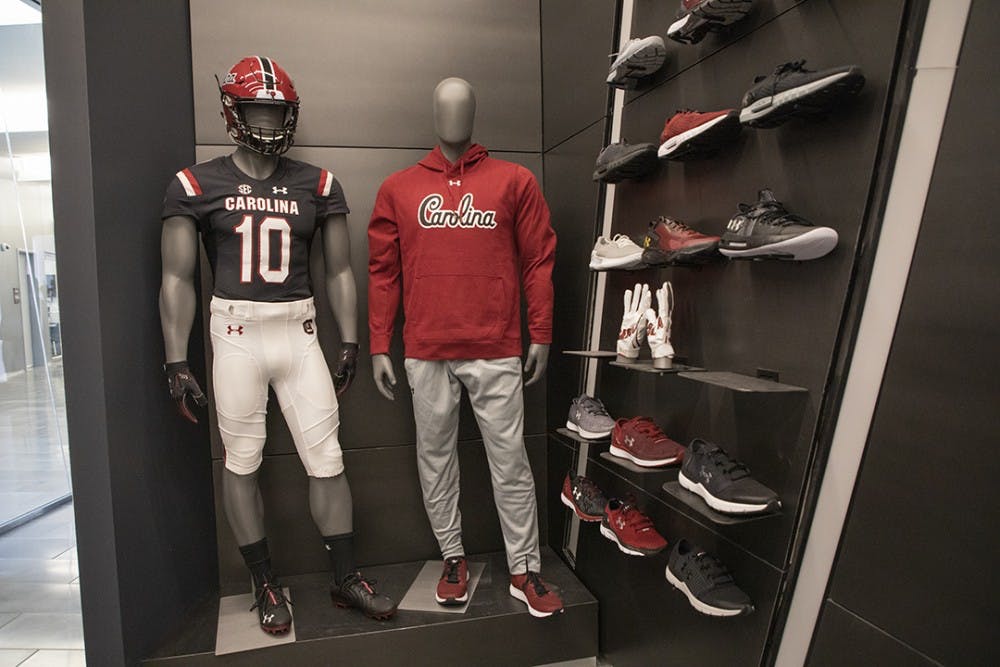 Named after Cyndi and Kenneth Long, the building is the center of all non-game-day operations for the football program.

Finished following the 2018 football season, head football coach Will Muschamp said he believes it confirms the school's investment in its student-athletes.

"This family typifies exactly what Coach Tanner talks to our entire athletics department about as far as investing in student-athletes," Muschamp said to The Big Spur.

Before the building was finished, all of the football operations were based in Williams-Brice Stadium and all of the amenities were scattered throughout.

That's no longer the case.

The new weight room is strategically organized, allowing coaches to rotate players through workouts without having to wait on equipment. The floor's material is intended to reduce back and knee pain for players who spend extended amounts of time in the weight room.

It also has three garage doors that open up to the practice field, used for easy transitions between indoor and outdoor workouts and drills.

Before this, players and coaches used to walk from the stadium to the practice fields between workouts and meetings.

“It speaks volumes when you walk in our weight room on a Saturday morning when they don’t have to be here, and there’s 38, 40 guys in there lifting on their own. That says a lot about wanting to be in the building," Muschamp said.

There are two nutrition stations — areas for players to eat with nutritionists available to them — one inside and one outside of the weight room.

The alumni locker room pays tribute to former Gamecocks, particularly those who made it to the NFL. Alumni are encouraged to come train with current athletes.

The facility also features a recording studio from South Carolina alumnus and Grammy-winning country artist Darius Rucker. The studio was built next to the players lounge in hopes it would create an opportunity for players to bond outside of workouts and practices.

The barber shop, called Spur Cuts, was donated by the Horry County Gamecock Club. There is also a movie room where athletes can binge-watch shows on Netflix or watch movies in their free time.

Muschamp said he believes the facility is unique because it's not fractured, unlike the old setup at Williams-Brice Stadium. Along with the adjacent Jerri and Steve Spurrier Indoor Practice Facility, the setup on Bluff Road is, in Muschamp's eyes, unmatched.

"The Long Center puts us at the forefront of facilities in college football," Muschamp said.

The Gamecock track and field team debuted its new facility as hosts of the Gamecock Inaugural meet in January this year. It took two years to complete.

The facility is a place where South Carolina can now host larger meets with more teams and room for fans to watch.

"I'm just glad to be here. I'm glad that, after 22 years, we have one of the world's best tracks," head coach Curtis Frye said in an interview with Gamecocks Online.

The complex is in the old South Carolina field house, located near Stone Stadium, the home of the Gamecock soccer teams.

The Carolina Indoor Track & Field Complex is one of three indoor track facilities in the SEC.

Frye said he believes athletes will now have the same opportunity as those from other universities. He said the team will also gain more confidence in its competing abilities due to new resources.

The facility allows athletes to practice regardless of weather conditions.

"We have a great academic institution here, we have great athletic facilities, and we have an outstanding track," Frye said.