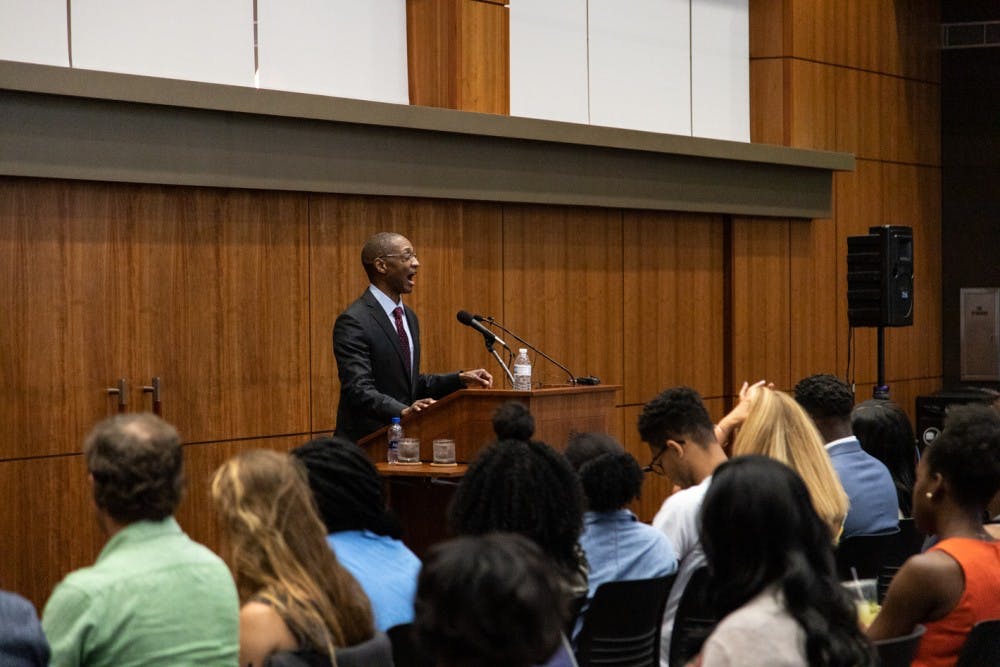 More than 60 people, many of them faculty and staff members, attended the first forum of the day.

Tate began by discussing his educational background, including his post-doctoral fellowship at the University of Wisconsin — Madison.

A concept he said he learned there was that a state institution should "touch the lives of every single family in the state." The other was the idea of faculty governance, which he described as always asking colleagues what they think.

Tate mentioned the idea of "do's and don'ts" several times throughout the faculty and staff forum. He described "don't" schools as schools that are known for students they "don't" let in. He instead wants USC to be known as a "do" school.

"If you switch the D around, OD, you also have opportunities to discover and create new knowledge," Tate said.

Tate also emphasized the importance of pushing towards a spot in the Association of American Universities, an organization composed of America's leading research universities.

Chief diversity officer John Dozier attended the faculty and staff forum and said there's a broad understanding of the institution's culture and that candidates are expected to answer questions in a "presidential" way.

“At the end of the day, we’re not hiring just a president, some figure, we’re hiring a person,” Dozier said.

Tate began the student forum by talking about his involvement in his undergraduate education with positions in Student Government, Greek life and working as a TA.

During the Q&A portion of the forum, students asked about sustainability, how to help transfer students better adjust to campus life and initiatives to provide research funding and support for graduate students.

"Listening to him talk about the vision that he has for the University of South Carolina really is inspiring and also showed that he did his research before he came here and that he put his best foot forward," said a graduate student, who attended both the student and open forums.

At the open forum, a main point Tate stressed was the importance of a qualified list of provost candidates that are diverse and representative of USC's community. Another topic Tate touched on was his passion for STEM education.

"I went to the University of Maryland and stayed in math education because I wanted to end the disparities that I saw in STEM fields," Tate said. "It motivated me. It is who I am. It changed me deeply and I became committed to that as a researcher."

Lyric Swinton, a third-year sport and entertainment management student, attended the student and open forums and said she was impressed with Tate's background and how he answered questions.

"I feel like a lot of times candidates can be qualified, but that special something is whether or not you're connecting with people," Swinton said.

Tate is the only African American among the presidential candidate finalists.

"I know that this university has never had a non-white male as president, so I think that this would be so, so huge going forward, not just for our university, but for our state," Swinton said.