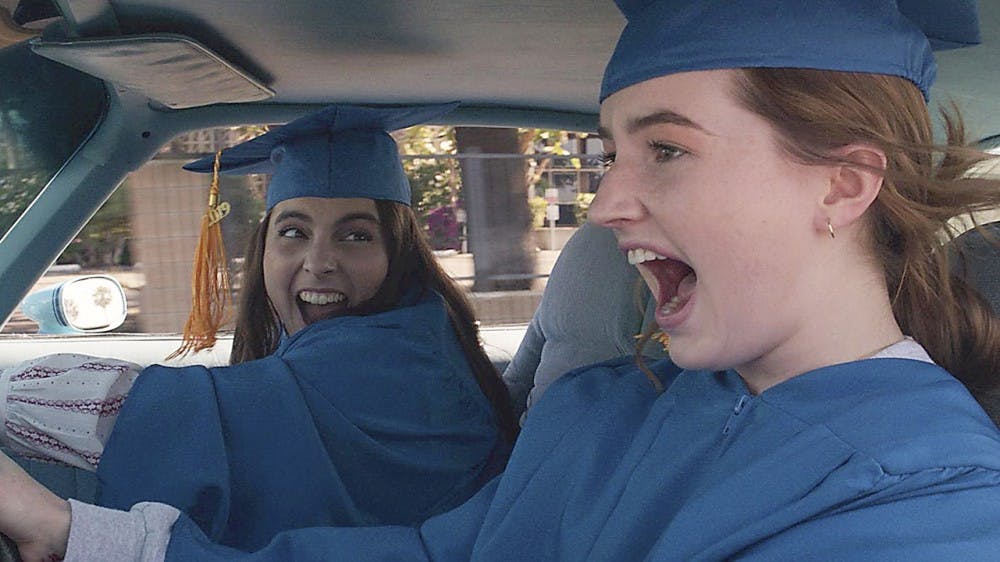 Review: 'Booksmart' is an instant classic that everyone should see

Olivia Wilde’s directorial debut is a visual masterpiece that explores friendship, high school and a little bit of romance, and it delivers. “Booksmart” is one of the best movies I have seen in a really long time.

“Booksmart” revolves around two best friends, Molly (Beanie Feldstein) and Amy (Kaitlyn Dever), who have dedicated their high school careers to maintaining straight A's and getting into top universities while sacrificing parties with their classmates.

When Molly realizes most of her classmates have barely put any effort into school but have been accepted into prestigious universities too, she decides that her and Amy’s last night of high school must be spent at a party. Of course, chaos and hilarity ensue as the girls make their way to the greatest party of their lives.

One of the best aspects of the movie is the chemistry between Molly and Amy. Feldstein and Dever play so well off of each other, and it is believable that the two girls have been friends their whole lives. The scenes that rely on Molly and Amy’s banter, wit and compliment battles offer an intimate look inside the friendship between two high school girls.

The notable side characters who appear throughout the film, such as Gigi (Billie Lourd), Jared (Skyler Gisondo) and Triple A (Molly Gordon), start out as one-dimensional figures who are seen as nothing more than their nicknames, the rumors circulated about them or their financial status. But as the film carries on, it is revealed they are much like the main characters: They have feelings and thoughts and are much more than what is said about them in the hallways.

About halfway through the movie, there is a visually stunning scene in which Amy jumps into a swimming pool and surfaces on the other side, a symbolic breakthrough for the introverted character. The camerawork made me feel like I was there, like I was part of the scene and could feel exactly what Amy was feeling. I got full body chills and teared up despite the scene offering no dialogue and only lasting roughly two minutes. It is breathtaking and cathartic, immersing audiences in Amy’s world.

The soundtrack for “Booksmart” is incredible. Every scene has an accompanying song that goes perfectly with the dialogue, mood and tone. Most of the songs build upon the action within the scene, connecting viewers to the emotions and feelings of the characters and moving the narrative along.

The best part of this movie is how genuine it feels. Olivia Wilde was able to capture what it really feels like to be in high school with people you hardly know. “Booksmart” took me back to the feeling of being surrounded by the same people for four years; to sharing a journey with hundreds of people; to leaving the same way we started, together; to feeling so connected with a large group of people simply because we graduated together. “Booksmart” plays upon the cliques in high school, but it shows that everyone is a three-dimensional person with emotions, feelings and hardships.