Letter to the editor: Caslen will be a great leader 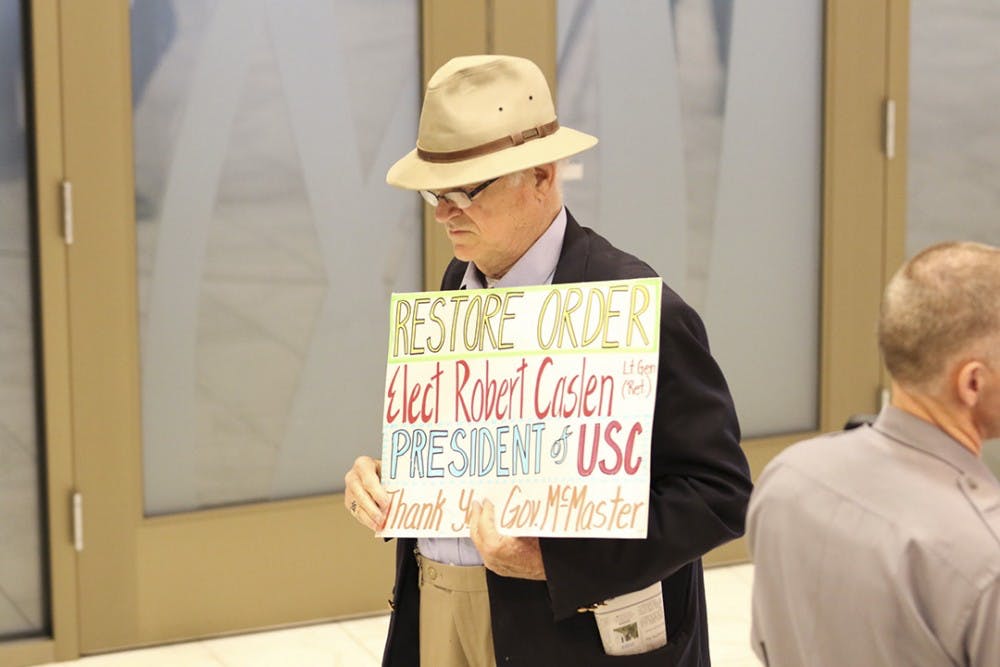 I cannot properly express how excited I was back in April when I read that retired Lt. Gen. Bob Caslen was on the short list to lead our university.  I am an unabashed Gamecock who was also proudly commissioned through UofSC’s Army ROTC program in 1985. During my military career, I had the privilege to work for then-Colonel Bob Caslen, so I knew what a great leader our school was interviewing.

I read the resumes and was certainly biased towards Bob Caslen, but believed that even an unbiased reader could see what a unique opportunity the Gamecock family had to be joined by a man of such honor and who was so well loved by the cadets at West Point that they called him "The Supe" or "Supe Daddy" and made big head signs of his face to wave at football games. We Gamecocks had the chance to bring onto our team a man who is a proven university leader for one of the finest schools in the country – no one else on that prestigious list had actually done the job.

I know Bob Caslen. I know that he allowed me, a female soldier, to work and succeed in an organization that had never before had a woman on its team.  I know he cared first about his soldiers and I know that he placed the needs of our soldier and their families first. I know this because I made a poor decision and placed the mission above the needs of one of our soldiers and he corrected me. It was not the dress down that I deserved. It was a deliberate explanation of what I had done wrong and why it was wrong and how we were going to fix it.  I never forgot that mentorship and strived for the remainder of my Army career to be that kind of leader.

I was therefore heartbroken to see that a group of USC stakeholders were protesting his candidacy. I was even more disappointed to see that their major point of contention, his unquestionably honorable military service, seemed at the core of their issue.  Statements like "took issue with his involvement in the Iraq War, his support for the Contras in Nicaragua" are not just incorrect, they are ignorant. Soldiers take an oath to support and defend the Constitution of the United States and to obey orders. Soldiers don’t get a menu of military operations and pick the ones they like or support.  Soldiers serve and lead where they are asked to serve and lead and are explicitly prohibited from making political statements or from denouncing U.S. policy.

Certainly, military service is not for everyone, but those who volunteer to serve should be respected for that choice. And in a time when football players who perform for the crowd for less than 20 hours a year on a field with whistles and sidelines and timeouts are somehow considered role models and heroes, it would be worth considering that Bob Caslen served for forty-three years in some of the most challenging jobs that our Army and our nation have – no whistles, no sidelines and no timeouts when the going got tough. He was promoted eight times in order to continue to lead our nation’s finest, and he did so with honor time and time again.

For five years, Bob Caslen led the amazing young men and women from across our nation who select the United States Military Academy for their education experience knowing that successful graduation will most likely place them in harm’s way to protect those of us who chose not to serve. West Point is full of history and traditions, and it is also full of students who are trying to define themselves and build their knowledge to succeed as professionals and leaders. Isn’t USC also full of history and tradition and don’t we strive for the same success in our graduates?

For those who question Bob Caslen’s ability to handle the administrative side of our university because military service is about foxholes and not bureaucracy, I offer another opinion. The Army, like all government agencies, runs on budgets, resources, human resource decisions and corporate policy.  Bob Caslen led our Army’s strategic planning and policy directorate – affectionately known as "Eisenhower’s Own" because they were originally established to build the Army that would win World War II. He also served on the joint staff where he led teams of soldiers, sailors, airmen, marines and Department of Defense civilians working on some of the most challenging issues of the time. When you read his resume, you see that Bob Caslen served in a myriad of diverse and challenging positions to include several academic assignments, and he was successful every time.

If you are still reading this, then those of you who supported Bob Caslen’s selection are probably nodding your heads. Those of you who opposed it are probably trying to pick apart everything that I have written. That’s the nature of our world today.  We live in a time when every young person is looking for a cause and many of us would rather egg them on than ask them to research and reflect before casting judgement. We all seem to pick a side, dig in and make ready for war.

For the sake of our great university, I ask everyone to put the decision process behind us. The last national election has proven that this is the most difficult of asks. But I love the University of South Carolina and I want us to continue to be the finest university in our state without a backdrop of drama and a caveating lead-in paragraph in every press story. I also have the highest regard for Bob Calsen and I want him to be tremendously successful as well. I want Bob Caslen to be a proud Gamecock. I can have both.

As we say in the Army, you can’t just talk the talk, you have to walk the walk, and time will show that Bob Caslen can walk the walk. As we say at Carolina – Forever to Thee.