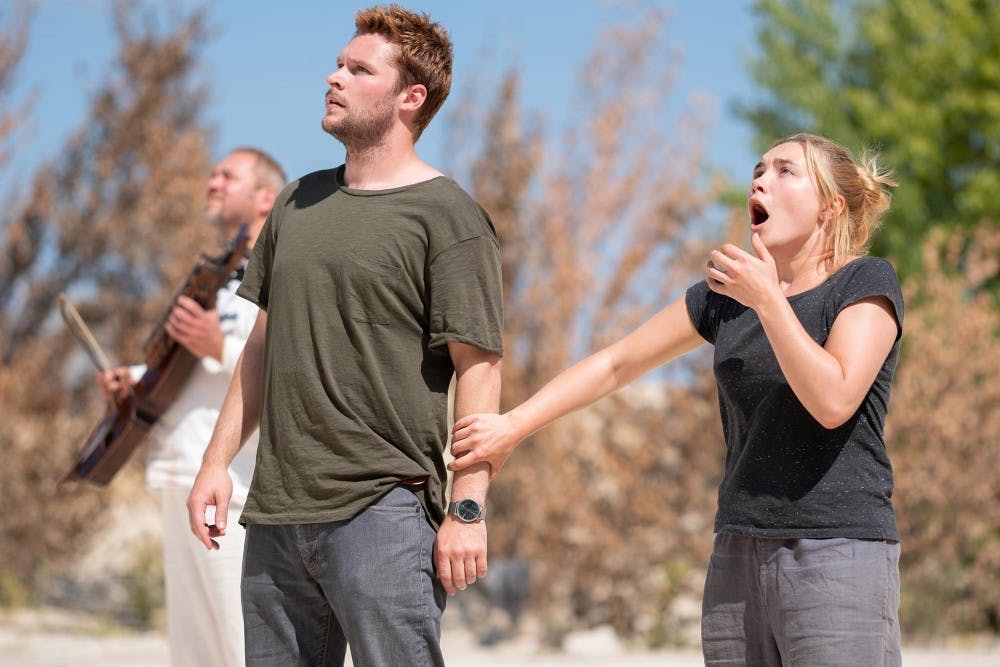 'Midsommar' madness: Our round table review of the year's most talked about horror film

Ari Aster’s second horror flick to grace the big screens wowed audiences this summer. Disappointed, horrified, energized, nauseous: everyone left the theater feeling something strongly, including three of our staffers. Is the near two and a half hour film worth the time? Here’s what we have to say.

Synopsis: After a monumental family tragedy, anxious college student Dani (Florence Pugh) is struggling to adapt back into society. Feeling pity, her emotionally distant boyfriend Christian (Jack Reynor) invites her on a trip to Sweden with his roommates, fellow graduate students (Will Poulter and William Jackson Harper). However, what begins with celebrating a summer festival with a Swedish commune slowly shifts into a bizarre nightmare marked by pagan cults, violent rituals and everything else in between.

“Hereditary” was a hot mess. What began as a family drama took a stomach-wrenching turn shortly before devolving into a slow burner of a supernatural thriller, minus the thrills. By the time the film remembered it was a horror in its final ten minutes, it succumbed to cliché tropes that brought nothing new to the table for horror fans and went back on its promise to artful cinema fans. Suffice to say, I was not expecting writer and director Ari Aster’s next work, “Midsommar,” to be a very scary or even enjoyable horror flick. If anything like its predecessor, “Midsommar” would dabble too far in artful cinematography and music scores at the expense of engaging storytelling.

"Hereditary" was one of my favorite films of the past few years, and my introduction to Aster's work. I intentionally went into "Midsommar" blind, knowing only what I saw accidentally on my Twitter timeline (something about a festival?). To be honest, I didn't think "Hereditary" could be bested, so I did my best to lower my expectations heading into the theater.

For months leading up to its release, critics hyped up Ari Aster’s directorial debut, “Hereditary,” one of the “scariest movies of all time.” While I suppose generational trauma is technically scarier than cheap jump scares or ghosts, let’s just say that after watching “Hereditary” I didn’t have to sleep with the lights on. Yet, for some strange reason, the film occupied my mind and wouldn’t escape my thoughts weeks after. Despite presenting itself as a family drama, “Hereditary” slowly unraveled into a nightmarish exercise in grief and the supernatural. So, when I was going into “Midsommar" I wasn’t expecting a traditional horror film. I knew I would be walking into a film that was a wolf in sheep’s clothing, a film that began as an unassuming drama and slowly morphed into monstrous mayhem. Based on the "Midsommar" trailer, I was expecting some psychological horror of “The Wicker Man” variety.

“Midsommar” was everything “Hereditary” aspired to be. There was a disturbing turn early in the film, and there were some gory scenes punctuated by stellar shots and sound editing, but what “Midsommar” did especially well that its predecessor could not, was build suspense without showing any actual foul play until very late into the film. The audience felt uneasy, could sense that something wasn’t quite right despite the smiling faces of the hospitable Swedes. The characters were believable, and their actors praiseworthy right up until the closing scene.

The emotional centerpiece of this movie lies in the main character’s journey through a landscape of instability and wavering mental clarity. From beginning to end, the movie manages to disturb. But unlike the traditional horror movie, it manages to construct a complex world that horrifies and placates the viewer in unexpected ways. In "Hereditary," viewers complained that the last quarter of the film seemed jarringly unfulfilling. But in "Midsommar," Aster carefully manages the viewer's suspense, and creating a movie that feels full and lush with equal degrees of character, atmosphere, and plot. "Midsommar" provided a completely immersive and fulfilling movie-going experience unlike any horror movie I'd ever seen.

First of all, can we talk about how great the performances in this film are? Like Toni Collette in “Hereditary,” newcomer Florence Pugh carries “Midsommar” with an intense performance that is the epitome of unrepressed female rage. However, Pugh isn’t the only standout. The other supporting characters in “Midsommar” moved with depth and were much more interesting than the ones in “Hereditary.” Another perk of "Midsommar" was the surprising comic relief, something that “Hereditary” lacked and other horror films don’t do so well. It’s actually mind blowing to me that “Hereditary” got better reviews than “Midsommar” because the latter is the more enjoyable movie. Yes, I say this as a "Hereditary" stan. “Midsommar” is a successful balancing act of several genres and despite its fair share of gore and disturbing imagery, this made it a more accessible film. I mean, that’s not to say that the film isn’t as focused or as meticulous in its execution as its predecessor. Like “Hereditary” you’re still trying to piece together a puzzle. However, this time there’s more elements, more players and definitely more stakes. Because of this, the ending of "Midsommar" is much more rewarding and even cathartic. Unlike Hereditary, the ending of “Midsommar” feels more earned.

Clocking in at almost two and a half hours, it’s safe to say “Midsommar” is longer than average. It also feels even longer than it is because it’s a slow burn. While this isn’t necessarily a bad thing, I wouldn’t recommend it if you can’t commit to watching a movie this long. Still, I think the slow pacing works to its benefit because it makes the film’s climax all the more exciting. I suppose another con of “Midsommar” is that the tone is a little all over the place. It’s a horror, drama, dark comedy and even falls into the “breakup” genre all at once. Although I enjoyed its many layers, others might be left confused on what exactly the film is trying to be.

A trippy experience that’ll have viewers questioning whether they themselves have taken hallucinogens, “Midsommar” was “Hereditary” without the supernatural elements, plus bizzaro takes on the fairy tale picture book from “Shrek” and music akin to “Welcome Christmas” from “How The Grinch Stole Christmas.” In other words, anybody who tries to draw comparisons to movies they’ve seen before will struggle to do so and should be immediately discredited. “Midsommar” is in a league of its own. It fails to fall neatly into any one genre — which is likely why many will leave disappointed — so this is one trip that is worth taking so long as viewers know exactly what kind of film they’re going to see. Come with an open mind and tempered expectations.

"Midsommar," like Aster’s previous work, succeeds in ensnaring the audience in an array of horrors beyond cinematic tradition. This is not the kind of horror movie that will make your date lean in closer. It’s not a horror movie you can put on in the background while you eat popcorn. It’s not the horror of restless ghouls with unfinished business, or teens getting picked off after sneaking into a haunted house.

No, this is horror in the true sense of the word. It’s the horror of atrocity, tragedy, emotional desperation. It’s the horror of struggling for mental clarity. It’s the horror of inevitability and loss of control. Yes, there’s no shortage of gore, but for me, this wasn’t even near the main attraction. Scenes of violence are used in complex ways, to create unexpected emotional tension and confusion. And the truly horrifying and engulfing darkness of this movie is not in the fantastic or shocking, but in the relatable and everyday. It’s in the way the characters treat each other, their callousness, their ignorance and their willingness to dismiss and manipulate.

Honestly, “Midsommar” is my favorite film of 2019 by far. The movie is so insane that I can’t really gauge what kind of person will enjoy it or what kind of person will absolutely hate it. That being said, this is one you’ll have to see for yourself because it’s nothing you can truly prepare yourself for. Whereas most films tend to elicit similar responses from its audience, “Midsommar” functions like a Rorschach test. It’s a roller coaster of emotions that results in an intimate, unique experience for every viewer. Nonetheless, we can agree on one thing. Like Nick said, for the love of God please don’t take your parents to see this. That would be scarier than being trapped in Sweden with a weird pagan cult.