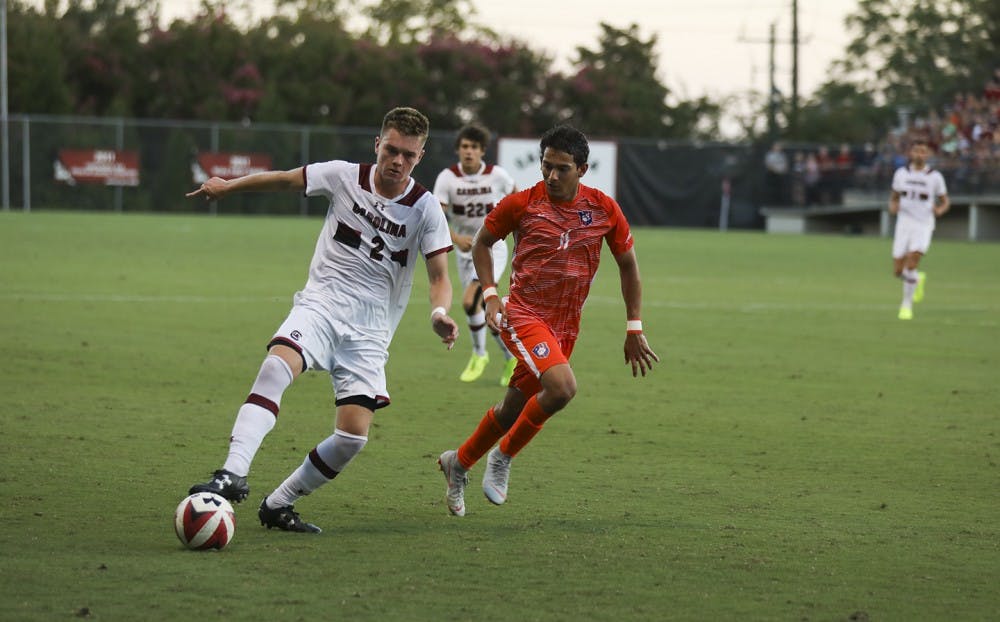 South Carolina men’s soccer opened its 2019 season Friday night with a 4-1 loss to Clemson on the road.

Coming into this match, Clemson owned the all-time series 29-17-1. The Gamecocks are 4-3 all-time when facing Clemson in the season opener.

Fourty-seven percent of South Carolina’s wins in the rivalry series have come on the road. However, playing on the road was not kind to the Gamecocks Friday.

Clemson got off to a fast start against the Gamecocks with an early goal from Kimarni Smith. South Carolina then answered with a goal in the 12th minute from Logan Frost.

Grayson Barber put the Tigers back up 2-1 with a goal in the 13th minute. That would not be Barber’s only goal of the game, as he scored another eight minutes later to put Clemson up 3-1.

The Gamecocks would not overcome this deficit, trailing 3-1 at halftime. Clemson’s Quinn McNeill added on another goal in the 78th minute, as the Tigers won by a final score of 4-1.

This dominant performance for Clemson marked its sixth straight win over South Carolina.

This was South Carolina's first outing since its exhibition loss to UNC-Wilmington on Aug. 25.

South Carolina finished its preseason with a 1-1-1 record, including a tie against nationally-ranked Duke.

"We have a very young team," head coach Mark Berson said in a press release during the preseason. "Fifty percent of the guys on the roster are new. We have a nice blend of youth and some experience."

The Gamecocks will now turn their attention to Gardner-Webb, as they will face the Runnin’ Bulldogs in their home opener at Stone Stadium on Sept. 3 at 7:00 p.m.

"The youth and the enthusiasm are some of the most exciting things about this group," Berson said. "With that comes inexperience, so we'll have to weather some storms."