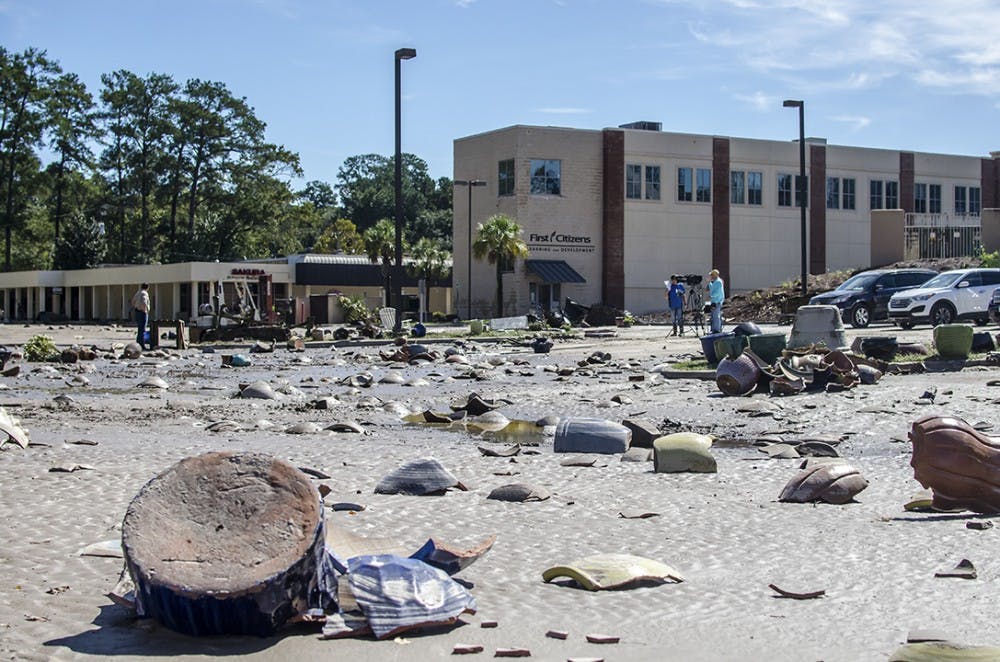 Freshmen who are new to Columbia are quick to notice its one of its most defining characteristics: the weather.

August in South Carolina is usually plagued with humidity and high temperatures that usually hover in the mid-'90s. Things do tend to cool off as the semester goes on, but there is another factor to consider when planning for the weather.

Columbia has a knack for attracting extreme weather during the fall semester. For the past four years, USC's campus has temporarily closed down due to serious weather. Although Columbia is far enough inland to avoid the full force of a hurricane or tropical storm passing though, any major weather system off the coast will disrupt the weather here, which could have negative consequences for campus life.

Due to Hurricane Joaquin in October 2015, Columbia encountered a 1,000-year flood, meaning the amount of rainfall experienced in Richland County has a 1-in-1,000 chance of happening in any given year.

Over 20 inches were dumped in the Midlands, a third of the state’s annual rainfall, in only four days, threatening the area’s critical infrastructure and destroying homes. A water main breakage put most of Columbia under a water boil advisory for over a week, shutting down most businesses and leaving thousands of undergraduates without adequate access to drinking water. The event cost over $1 billion in damages and has its own Wikipedia page due to its significance.

Because of the severity of the weather, Richland County government made the decision to close, shutting down all unnecessary operations, such as local schools and government offices. As a public institution, USC also closed for that duration, canceling classes and sending students home for almost a week.

A series of similar, although significantly less dramatic, events would go on to repeat themselves for the next three years.

In 2016, the campus closed in preparation for Hurricane Matthew. Hurricane Irma briefly cancelled classes in September 2017 and tropical weather would again cancel classes the next year.

If this record is anything to go by, a similar closure could affect USC this year sometime in late September or early October.

Extreme weather such as hurricanes might seem terrifying to any new student on campus who haven’t experienced one prior. The prospect of being far from home without electricity or running water could worry any undergraduate. Although this force of nature is unavoidable, there are a few steps anyone can take to possibly ensure their safety in the event of a natural disaster.

First, make sure to pay attention to any and all notifications from the National Weather Service. The best defense against extreme weather is knowing when it will hit and how to stay safe. USC employs a Carolina Alert system that sends notifications to your phone and email in case of an emergency.

If there is a warning for extreme weather, try to make sure your phone and other electronic devices are charged and in good condition. That way, if classes are cancelled, you can keep in touch with your parents and stay informed about road conditions and other important information. It’s a good idea to keep a charged portable charger handy in case Columbia is without power so your phone can weather the storm.

Another way to stay safe in extreme weather is simply to stay inside. Weather that shuts down a county can certainly ruin your day, be it through lightning strikes, strong wind that can down trees or flash flooding. Columbia is infamously prone to flooding, especially in low-lying areas such as Five Points. Never attempt to drive a vehicle through rushing water, as it only takes a few feet of water to set your car afloat. Rushing water can also obscure sink holes or other road damage that could threaten your vehicle.

Although the weather in South Carolina might seem scary, the best way to avoid harm is to stay informed, stay safe and know what to expect.