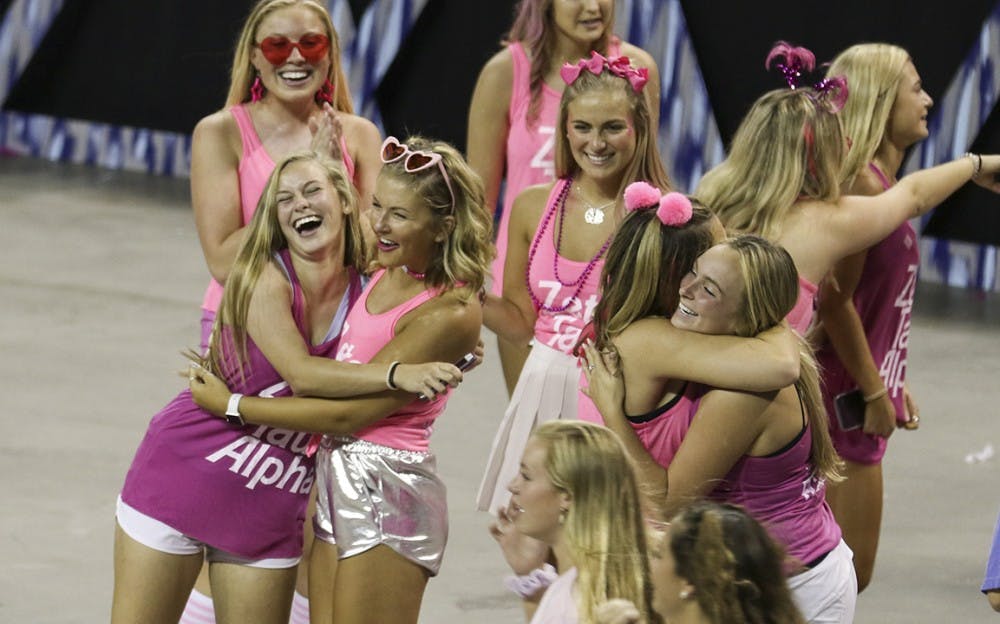 About 1,500 new sorority members ran home into the arms of their new sisters on Sunday at Bid Day in Colonial Life Arena after more than a week of sorority recruitment.

Sorority recruitment round one began on Aug. 15. New members met all chapters and continued recruitment for the following eight days.

During recruitment, some women from each sorority leave their house and take up the position of Pi Chi, a temporary counselor for about 30 of the potential new members. The Pi Chis guide them through the recruitment process, including bringing them to each respective house during round one and serving as a mentor.

Pi Chi's are temporarily separate from their chapters, and remain in that limbo state until the end of Bid Day, where they reveal their chapter's letters on T-shirts.

Emma Mondo, a fourth-year broadcast journalism student and Pi Chi, said her role was to serve as an unbiased recruitment guide for the new sisters. She said although it was kind of a blur, she remembers her Bid Day as one of her best experiences.

At Bid Day, Mondo revealed to the new sorority sisters that she was a member of Zeta Tau Alpha.

During Bid Day, Pi Chi members line the tunnels on the floor of Colonial Life Arena, awaiting new sisters as they run out of the arena tunnels to their new sisters.

Thirteen sororities loaded the lower deck seats of Colonial Life Arena, chanting and cheering their chapter's chants and anticipating the acceptance of their new sisters.

Sarah Sterock, a first-year biochemistry student, found her new home in Alpha Gamma Delta after she made her way through a tunnel run to her sorority. Sterock said she joined Greek Life for the community and automatic friendships she has made with her new sisters.

Annalee Brody, a second-year public health and Alpha Gamma Delta member said she met Sterock in the third round of recruitment and was excited to formally meet her as a sister Sunday afternoon. She said being a Pi Chi recruiting member allowed her to meet more sisters and see a fresh perspective.

Bryden Simmons, vice president of recruitment, said that Bid Day is the only time all the sorority sisters are able to come together and celebrate under one roof.

"It's really great to see all the women in this community come together and be in one room together," Simmons said.

Panhellenic president Christen Piccioni reflected back on her experience at Bid Day three years ago and said she didn't realize how important it was.

"When I was a freshman running through those tunnels, I was just super excited, overwhelmed, with joy, really just completely unsure of myself," Piccioni said. "And then throughout this journey, three years later, I get to stand here and address all these women."

"Finally finding the place that you've been thinking about for the past two weeks straight and finding that home away from home is really an exciting time," Piccioni said.

Maddox Greene and Hannah Wade contributed to the reporting of this article.