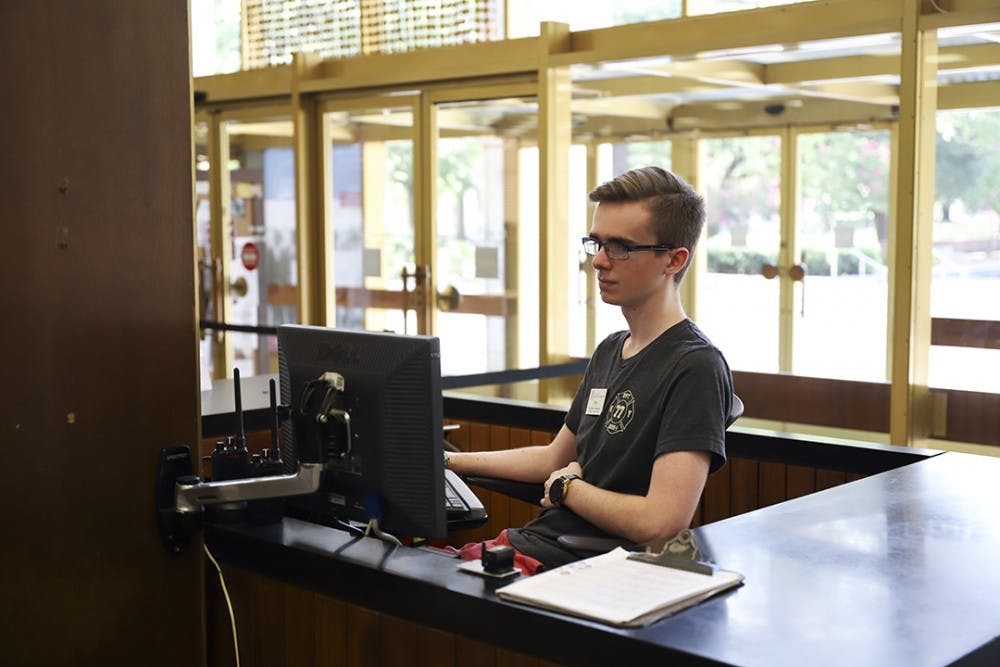 While many students with jobs leave campus to punch in their hours, some students don't have to take a step off campus to do their work.

Chloe Holowczenko, third-year public relations student, works part-time as a student assistant in the School of Journalism and Mass Communications. Holowczenko said she spends her days on campus by attending classes and then heading to work without leaving campus.

Holowczenko said helping with administrative work is therapeutic for her, but she also enjoys helping students with advising because she understands how stressful and overwhelming it can be. She said her perspective as a student assistant is helpful because she can understand issues as both an employee in the advising department and as a student.

Another positive about being a student employee, Holowczenko said, is simply networking and making friends with advisers, professors and other students who work in the office. She said she would recommend that any freshman looking for a job look into working on campus.

"I would tell them that it's the easiest way to get your foot in the door within your college or within something that you're interested in," Holowczenko said.

Nicole Weirich, a recent USC graduate who served as a peer adviser in the study abroad office on campus, advises students who are contemplating going abroad to study. Weirich said some of her tasks include visiting University 101 classes, giving presentations on the study abroad programs and holding a weekly workshop to aid interested students in researching which country they want to study abroad in, how to apply and how to finance their transfer.

Weirich said her favorite part of her job is giving presentations to first-year students and seeing their excitement when they find out about the many study abroad opportunities offered. Weirich said the most interesting thing she's learned while working on campus is how connected all of the offices on campus are, as she worked closely with the Office of Student Financial Aid and Scholarships and the Undergraduate Research Office.

Weirich also said the convenience of having a job on-campus versus off-campus is a reason in itself to apply.

"You already have to be there anyway, so I would think if you could get a job on campus, it's usually a lot better paying and more convenient than something off campus," Weirich said.

Megan Mellerson, third-year public relations student, prepares the student newsletters each week for the College of Information and Communications. She said she enjoys keeping the school and the college up to date on the happenings in her college.

Another big part of having an on-campus job is the convenience in comparison to working off-campus.

"There isn't a question about whether or not your school schedule would be an issue because it is on campus," Mellerson said.

Mellerson said she's worked off campus jobs in the past and had trouble requesting days off because of her school work. The flexibility of her USC job allows her weekends off so she can get involved with student organizations.

Additionally, Mellerson said she doesn't have set hours and is allowed to do her job at her own pace. She said her favorite thing about her job is she's able to apply what she's learning in classes to it.